Anthropomorphic Alien Heroine
Moa is a member of Plasmagica and the drummer and vocalist of the group.

She is voiced by Ayane Sakura in the Japanese version and Monica Rial in the English version, the latter of whom also voices May Chang, Tsubaki Nakatsukasa, and Mirajane Strauss.

She is a black sheep myuumon with light pink wool and as an afro like hairstyle. She has two yellow swirly horns, and little orange and yellow stars decorating her hair. Her clothes consist of a pink bubble dress with two yellow stars for pockets and long black sleeves with black tights and pink knee high boots. Around her neck hangs a big pink bow and golden bell. Her eyes are dark blue and in her humanoid form, her hair is a brighter pink and her skin is pale.

She likes to think of herself as an alien.

In the anime, this is evidently true, as she states that she is from another planet to investigate Sound World, though she does not say this out loud. Moa is shown to be the most bubbly and energetic of the band members, and quickly becomes friends with Cyan along with Retoree and ChuChu. 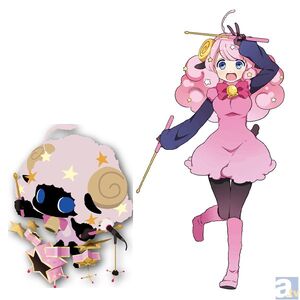 Retrieved from "https://hero.fandom.com/wiki/Moa?oldid=2183947"
Community content is available under CC-BY-SA unless otherwise noted.