Moira MacTaggert was once one of the world's leading authorities on genetic mutation and close friend and ally to Charles Xavier and the X-Men. She is the tetratagonist in X-Men: First Class and portrayed by Rose Byrne.

The daughter of one Lord Kinross, Moira MacTaggert or Moira Kinross as she was known at the time was born in Scotland. Moira met and fell in love with Charles Xavier also known as Professor X, at Oxford University, as a graduate student. She had been granted a scholarship to study genetics at the prestigious university. However, despite her love for Charles and a promise to wait for him she was forced by her father to marry a politician named Joseph MacTaggert and broke off her engagement with Xavier while he was fighting in the Korean War. Joseph was an abusive husband, beating her and then finally raping her. There after she would have a son named Kevin, who would become a mutant menace with the ability to alter reality at will. Moira had kept her pregnancy a secret and when Joseph refused to divorce her, she made people believe she was a widow. Moira was the operator of a high-tech Mutant Research Center on Muir Island, and it was the largest most advanced facility of its kind and was owned and operated by a private individual.

At one point in time she used the facility to do genetic research and confine her son Kevin (and mutants she and Prof. X considered to be dangerous), who was later named Proteus when his powers had become uncontrollable. At the research center she continued to research the human/mutant genetics genome, all while hoping to eventually find a cure for her son. Moira also adopted an orphaned mutant named Rahne Sinclair, who would later be known as Wolfsbane.

Moira is a leading expert in the study of genetics, specializing in superhuman genetics and mutant genetics, even having earned a Nobel Prize for her work. Moira is the co creator of Cerebro, and had considerable involvement and contribution to Xavier's Xavier's School for Gifted Youngsters. At one stage, Moira had and operated her own school for young mutants in collaboration with Charles Xavier, her students being Vulcan, Sway, Petra and Darwin. However during a rescue mission for Xavier's students they were tragically killed in action. The event so traumatic that Charles made his own choice to suppress the memories of the event and students, making it as if no one knew what had really happened. 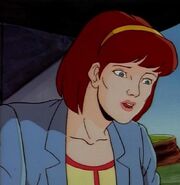 Moira MacTaggert in X-Men: Apocalypse
Add a photo to this gallery
Retrieved from "https://hero.fandom.com/wiki/Moira_MacTaggert?oldid=1865723"
Community content is available under CC-BY-SA unless otherwise noted.