Spending time with her mom

Make Higher for Hire a success

Molly is an adorable 6-year-old, yellow-furred, anthropomorphic female pink-nosed bear cub. She has blue ribbons tied into bows around her ears (giving her the look of pigtails), a pink short-sleeved polo shirt, frilly white diaper-like panties and lavender overalls.

In addition to her cuteness, Molly is an adventurous little tomboy who even at six years old, is not afraid to speak her mind just like her mother; sometimes she pretends she is "Danger Woman" (the action/adventure heroine of a popular kids radio program) while seeking adventure along with Kit and Baloo.

Molly Cunningham is confirmed to appear in Season 3 of the DuckTales reboot. 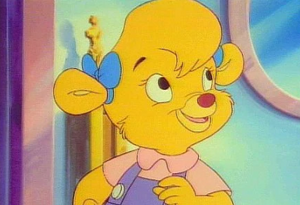 Add a photo to this gallery
Retrieved from "https://hero.fandom.com/wiki/Molly_Cunningham?oldid=1744372"
Community content is available under CC-BY-SA unless otherwise noted.