Molly Hayes Hernandez is one of the main protagonist of the Hulu tv series Runaways.

She is the daughter of Gene and Alice Hernandez, and was adopted into the Yorkes family after their deaths, and later became friends with the Runaways. Upon learning that her adopted parents were making sacrifices with PRIDE, she and her adoptive sister, and the Runaways decided to stop them.

She is portrayed by Allegra Acosta, and Evelyn Angelos young.

Molly Hernandez was born in early 2003 to Gene and Alice Hernandez, scientists who were members of PRIDE, making sacrifices to Jonah. Around 2007 when she was four years old, Molly saw her parents worrying in their lab, and noticed a rock on the desk as it was making light.

An explosion occurred in the lab, Molly held onto her toy and the rock, and hid under a table as she witnessed the deaths of her parents. After the destruction, Molly looked up at the sky, and her eyes turned orange, as the rock enhanced her physiology and gave her powers.

Molly attended her parents' funeral, and was adopted by Dale and Stacey Yorkes, who had a daughter named Gert. Molly attended Atlas Academy, and became friends with Gert Yorkes, Amy Minoru, Nico Minoru, Karolina Dean, Alex Wilder and Chase Stein, who's parents were also members of PRIDE. Her relationship with her friends became strained when Amy mysteriously passed away, but remained close with Gert.

Molly attempted to join the dance squad, but suffered from what appeared as cramps, and went to the nurse. However, Molly learned that she super powers, demonstrating superhuman strength when destroying a chair. Molly returned home and tried out her powers in the garbage, and later received a text from Gert to feed their parents' pets.

Molly went down into the basement, and heard strange noises from a heavily secured vaulted room, and saw a genetically engineered dinosaur. Molly became terrified and left the basement, calling Gert, saying she wanted to leave the house. Molly later found by Gert, who took her to the Wilder's mansion, as Alex had invited all of his former friends there. The group began to argue, and Karolina suggested they talked about Amy, so they could move on. Despite there being resentment between the group, none of them held a grudge to Molly, as most of it was on Alex.

When the group agreed to stay and wanted to get alcohol from Geoffrey Wilder's office, Alex opened a secret passageway on accident. The group find themselves witnessing their parents sacrificing Destiny Gonzalez, and Molly took a picture. The picture caught the attention of PRIDE, forcing the teenagers to flee to Wilder's guesthouse. While Alex cut the power, Molly rested from exhaustion, but was awakened by the others so they could fake playing Twister. Afterward, Molly showed the group the picture she took, but it was blurry and didn't show anything. Molly and Gert were taken home, and Molly couldn't sleep after what she saw, and asked Gert could she sleep in her room, and she agreed.

Molly met with the others at the beach, and the group decided to do more investigation on what they saw. Molly suggested they investigate the Yorkes' basement, as she saw something weird in the vault, but her suggestion was discouraged. Angered, Molly left and went to the Timely Coffee to be alone, and Catherine Wilder approached Molly, returning her hairpin as she found it in Geoffrey's office. Molly pretended that she had to go to the bathroom, and used her super strength to escape, but became exhausted and fell asleep. Molly woke up in Catherine's car, and expressed her frustrations on that she was burden, and wanted to know more about her real parents.

Molly attempted to tell the group about her powers during a WizTalk conversation, but was interrupted by Gert. The next day, Molly returned home and prepared to write questions to Catherine about her biological parents, but heard a noise downstairs. She was confronted by the dinosaur named Old Lace, but Gert came to her rescue and calmed the creature down. When Dale and Stacey returned home and locked the creature back into the vault, Molly and Gert wanted answers, with the Yorkes explaining that it was for protection. Before they could explain more, Tina Minoru ringed the doorbell, and the Yorkes tasked Molly and Gert in making sure Old Lace didn't escape.

Gert informed Molly that Alex had been kidnaped by unknown abductors, and met with Karolina and Nico at the Timely Coffee. Nico used her staff to see the heat signatures of the kidnappers, and succeeded in rescuing Alex from Darius Davis. Molly used her enhanced strength to stop Davis' car from leaving, and Chase and Karolina used their powers to attack the kidnapper, who ran away. The group went to the Timely Coffee, and Alex told the group that they should save one of his kidnappers, Andre Compton, as he believed that he was going to be sacrificed by PRIDE. Going to the Wilder mansion, they found the secret room empty, failing to save Andre, and Molly and Gert returned home.

The next day, Molly met with the runaways on their new plan to get information on PRIDE: infiltrating Wizard headquarters to collect a file during a fundraising gala. Towards the end of the party, Molly accidently admitted that she saw PRIDE in their robes to Catherine, and realized her mistake. The next day at the academy, Molly admitted to the group that she Catherine might now they saw them committing a sacrifice, and the group blamed her for being too honest. Despite receiving comfort from Karolina, Molly ran away and attempted to befriend the dance squad and Eiffel, but was humiliated. Karolina came to her rescue and comforted her, and the two bonded on their super powers, and Molly later attended the open house.

Returning home, Dale and Stacey revealed that Molly was being sent to Montebello to learn more about her biological parents, and was going to stay with her second cousin. Despite Molly and Gert protesting, Molly was sent there, and her second cousin gave her an envelope from her parents that held a key, and to find her toy elephant. Despite losing it at the Metrolink, Molly remembered that her parents went back to retrieve it, and used the key to on a safe, collecting a VHS tape.

Molly managed to return to Los Angeles and met with the Runaways, showing them the tape, and the group watched. The video showed Molly' parents explaining that PRIDE's activities had severe consequences, and their plans could cause mass destruction across California. Molly was upset afterward, believing her parents to be evil, but was comforted by the group, who told her that they were probably warning her and others about PRIDE. The group decided to infiltrate the PRIDE construction site, and Molly encouraged Gert to admit her feelings to Chase while they attended the school dance.

The group managed to stop PRIDE's drill at the construction site, and were confronted by PRIDE and later Jonah. The group fought against their parents, but Karolina ordered them to leave as she used her powers against Jonah, but was captured and taken away. Molly and the others hid in the woods, planning to either leave Los Angeles or rescue Karolina from PRIDE. After rescuing Karolina, the group realized that they were accused of murdering Destiny Gonzalez, and supposedly kidnapping Molly. The group were forced to go on the run, with Molly questioning the others did Arizona like brown people. 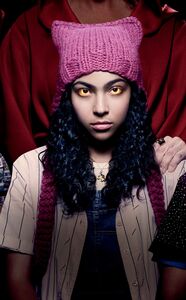 Molly in season one. 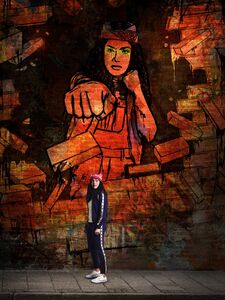 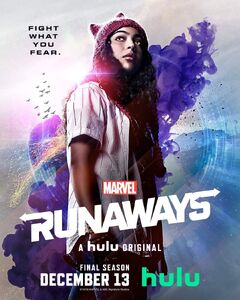 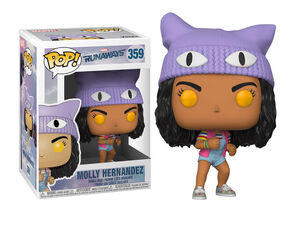