The Ghost and Molly McGee

Summoning Scratch
Spiritual powers (while in the ghost world)

Helping the town of Brighton and its people.

Free Scratch from the Ghost council and their wrath (succeeded).

Molly McGee is the main protagonist of the 2021 Disney animated series The Ghost and Molly McGee. She is a 13-year-old Thai-Irish-American girl who befriends a grumpy ghost named Scratch that lives in her house. She also desires to make the world a better place.

She is voiced by Ashly Burch who also voices Enid Mettle from OK KO! Let's Be Heroes.

Molly is shown to be an optimistic and excitable girl who lives to make the world a better place. She is almost always able to see the bright side and add a positive spin to things in her life, even when they appear completely negative. Molly is noticeably very good-natured and has a strong sense of honor, since she believes in good sportsmanship and helping through hard work. Due to her nature, Molly usually does not appreciate Scratch's questionable deeds and antics unless she is desperate or if they work out in the end.

However, Molly can sometimes be opportunistic and selfish at times, such as in "Mazel Tov, Libby!", where she threw a huge party when Libby didn't want to, and Molly wanted to ruin Libby's party instead of listening to her best friend's wishes.

Molly is a Thai-American teenage girl of medium height, medium-length brown hair, and dark brown almond-shaped eyes. She wears her hair up in a short ponytail with a pink hairband.

As a ghost, Molly has a bright gold color, which causes her to stand out amongst other ghosts who look dark and gloomy. She also has pink eyes and a purple nose.

Molly wears a ripped jean vest with a teal pin, a white and black ringer shirt, a pink and purple skirt, and black biker shorts, and a pink hairband. She wears pink and yellow sneakers. She also has a purple spiral bracelet.

Molly was born to Sharon McGee and Pete McGee. After her father got a new job, she would move all over the country to several states such as Oklahoma, where she would make friends but eventually be forced to leave.

At some point, however, Molly would then move to her permanent home in Brighton with her family.

The Ghost and Molly McGee

When Molly McGee and her family move to Brighton, they settle into Scratch's house. When Scratch is unable to scare Molly, he casts a curse on her that binds the two of them together. However, the curse Scratch casts is more of a curse on him than it is on Molly, as it grants her the power to summon him whenever she pleases. Molly is overjoyed by this curse, believing it makes her and Scratch official best friends. Scratch however is less than thrilled about the curse and learns that the only way to break it is to somehow make Molly leave his house forever. 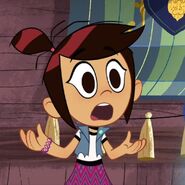