Patrol and protect the Youkai Mountain

The power to see at great distances

Keen sense of smell
As a tengu:

Playing Dai Shōgi with the Kappa in her spare time

Anyone who intrudes the Youkai Mountain
Some Tengu species

Momiji Inubashiri is a white wolf tengu whose duty is to patrol the Youkai Mountain. She has a telegnosis ability to see a thousand ri ahead. Her good sense of smell and sight are helpful for this duty. Momiji does not have an official game portrait, only a sprite from Mountain of Faith and Double Spoiler. But she does have some appearances in print works.

When the heroine finally reached Youkai Mountain during the events of Mountain of Faith, Momiji Inubashiri attempted to stop her at the waterfall. Although Momiji was unsuccessful, it seems she did fulfill her duty of reporting the intruder's presence back to the other tengu with record speed as a reinforcement tengu had arrived by the end of the same stage to investigate what was going on. Later Momiji observed the final battles between the heroine and the newly appeared shrine and its god, apparently without being noticed by any of them.

Momiji only has a small sprite both used in Mountain of Faith and Double Spoiler, so an accurate description is not possible, but from the sprite, we see that she wears a white, long-sleeved shirt, and a large black skirt with red flame-like designs reaching up from the bottom of the skirt, and that it has a white layer below her skirt. She has short light silver hair and wears a red Tokin. She holds a large scimitar-like sword and a white, round shield with a red maple leaf print on it.

In a later appearance in Oriental Sacred Place, it is seen she has detached sleeves and wolf ears. However, in Symposium of Post-mysticism, she is seen without wolf ears.

Mythical Mirror (Momizi Inubashiri)
Add a photo to this gallery 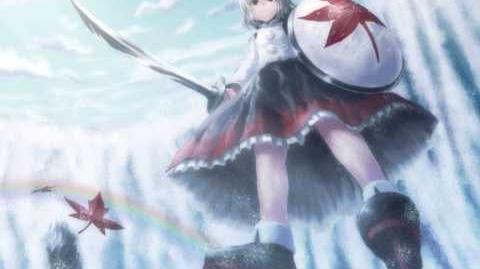 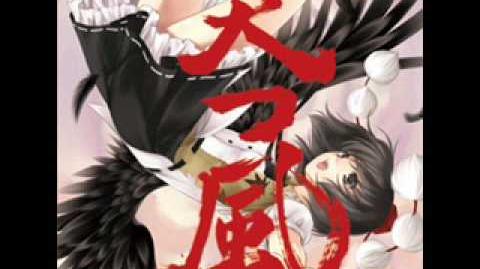 Retrieved from "https://hero.fandom.com/wiki/Momiji_Inubashiri?oldid=1791179"
Community content is available under CC-BY-SA unless otherwise noted.