Ice Age: Dawn of The Dinosaurs

Ruler of the Dinosaur World

Fleeing Rudy (formerly).
Eating ones that are bad (currently).

Protect her young and Sid .

Momma Dino, also known as Momzilla, Momma Rex, or simply Momma is an antagonist turned major character in Ice Age: Dawn of The Dinosaurs and a supporting character in The Ice Age Adventures of Buck Wild. She is a female Tyrannosaurus rex who captured Sid after he stole her eggs away from her, only to raise her children alongside the sloth further on. A protective mother, Momma cared deeply for her young, despite her terrifying appearance and resided with her family in a vast underground world in which dinosaurs survived extinction.

Her vocal sound effects were provided by Frank Welker.

Ice Age: Dawn of The Dinosaurs

Leaving the subterranean Dinosaur World for a spell, Momma laid three eggs and went up to the surface to set them down in an underground ice cave. After her eggs were found by a ground sloth named Sid, who took them as his own and raised them, if only for one day. The next day, Momma returned to the cave to find her eggs missing.

Knowing they must have hatched by that point, Momma searched for them on the surface, much to the shock and fear of the animals at seeing a living dinosaur, for the animals on the surface had long since believed that dinosaurs were extinct. Momma found her three young hatchlings, who, never having seen or recognized their mother, were terrified of her, along with Sid. Regardless, Momma picked the three hatchlings, along with Sid, up with her jaws and returned to the warmth and security of the world below. Momma returned to the world below with her young as they yelped in fear of Sid, who was also frightened.

After reaching a wooded area, Momma let her three children down on the ground and proceeded to eat Sid for her meal. The sloth, however, proved troublesome to eat, as he grabbed onto a nearby branch as Momma tugged at him and would not let go, launching himself straight into one of her nostrils. Momma snorted Sid out onto a tree branch and continued her attempt to eat him, to which Sid tried to reason with her as he hopped through the tree, working out a plan to share the care of the children. Momma was uninterested and still attempted to snap down on the sloth, who dodged her bites until he landed in a mass of vines, entertaining the hatchlings. Momma, seeing that Sid was bound and unable to escape, tried to eat him, only to be confronted by her children, who growl at her when seeing that she was about to eat Sid. In annoyance with Sid, Momma swatted Sid aside with her tail, binding him in the vines onto a tree.

Later, when Sid tried to feed the dino babies with vegetables (which they don't like because they are carnivores), but Momma tries to show Sid that it is in their nature to eat meat, but Sid wouldn't listen (again) and after a few attempts to win, Momma wins the argument after her babies eat a giant drumstick, giving Sid a look. She then suddenly hears Rudy roaring, but Sid doesn't know what he is since he doesn't know about Rudy. He and the other dino babies are taken to safety.

That night as saur takes her babies up to her nest, for sleep, but leaves Sid to sleep on the ground below. Sid tries to sound optimistic about this but admits to himself quietly and softly that he misses his friends, and thinks that they aren't missing him, because of his clumsy nature and the damage he caused to Manny and Ellie's kid's playground, thinking that because of this, everybody hates him. saur senses Sid's a hard time takes pity on him and takes him up to her nest where her babies are sleeping. Sid gratefully says that she's a real softie, but she doesn't seem to hear him as she looks for any signs of Rudy, before she nestles in for the night. The next day, she, Sid, and the kids are playing, when Rudy makes his roar, causing Momma and her babies to run in fear, leaving poor Sid behind.

Except for when Sid passes her kids, Momma doesn't appear again, until later when she saves Sid's life by charging into Rudy just as he was about to finish off the sloth and pushes the dinosaur toward an empty chasm to his presumed death (although it is later shown that Rudy survived the fall). Momma then lets out a mighty roar of triumph, knowing now that she and her family are safe and can now live without fear. She and her babies affectionately say their final good-byes to Sid as he goes back to his regular herd. Momma and her babies then head off back home, possibly search for a new one or their father. 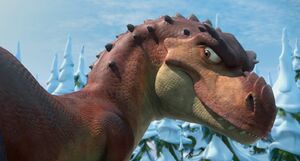 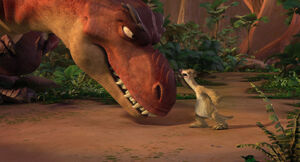 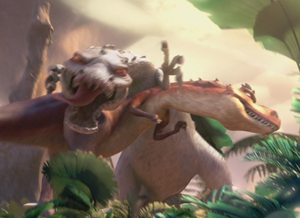 Momma Dino standing up to Rudy. 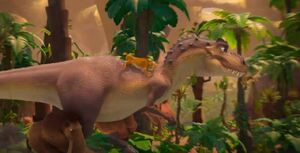