Stealing food
Hanging out with Appa

Stay by Aang's side. (succeeded)

Momo is a lemur from Avatar: The Last Airbender. He is Aang's pet that Team Avatar found at the the Southern Air Temple, and has been apart of the team since.

Momo's personality was typical of his species: curious and intelligent. He was an asset to the team with his friendly and playful ways, and often helped to feed Sokka's humor as the straight man. This brought much needed levity to the group from time to time. Although rare between different animal species, Appa and Momo possessed a special bond, which may be due partly to linguistic similarities, as they were capable of understanding one another's speech. Momo was also adept in many situations, such as when the pygmy pumas chased him for food only to find themselves on the menu. Momo showed compassion and intelligence, and aided them in their escape while at the same time making valuable allies. He was also something of a glutton, and would often gorge himself on any available fruit. 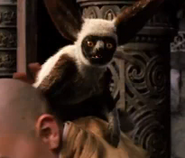 Momo in The Last Airbender 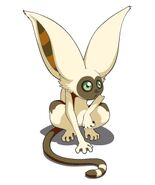