Momo Yaoyorozu (八百万 百, Yaoyorozu Momo) is the vice president of Class 1-A at U.A. High School, where she got in through official recommendations, and is training there to become a Pro Hero. She is one of the main heroines of the My Hero Academia franchise.

She is voiced by Marina Inoue in the Japanese version of the anime, and by Colleen Clinkenbeard in the English version.

Momo is a tall teenage girl with a rather mature physique for her age. She has long black hair that is often tied back into a long pony tail, along with thin and dark eyes, accompanied by short eyebrows usually set in a determined expression. Due to her Quirk’s need for fat cells, she prioritized keeping her figure fuller than her peers. During school time, she is often seen wearing her traditional school uniform.

Her hero costume consists of a red, sleeveless leotard with white lines and two gold utility belts around her waist. Her costume was designed to expose as much skin as it could, giving her more openings to use her Quirk to create things.

Her winter costume includes her standard costume, as well as incorporating a red cloak with a ring and gemstone.

Momo is a dedicated and highly intelligent girl with determination to become a Pro Hero, she commonly shows herself to be one of the most intellectual in Class 1-A having come first place in the midterm exams. Despite coming from a very wealthy family and background, Momo is by no means snobbish, she is friendly and interactive with the rest of her class and showed to be eager to hold a study session at her residence.

During this, her bubbly and supportive attitude shined through most while lecturing her classmates and helping them improve. Given that her Quirk Creation, requires her to know the molecular structure of whatever she's making, her intelligence is only highlighted by her handling of this power. She is undoubtedly one of the smartest students in Class 1-A, if not the smartest.

While her costume was intentionally designed to be revealing, it is shown that Momo is rather innocent when it comes to such matters, as such she's often annoyed by the perverted schemes of Minoru Mineta, referring to them as despicable. In other words, she has no intention of showing off her looks and her outfit is only for maximizing the effectiveness of her Quirk.

After being defeated in the Sports Festival, as well as endearing an internship with Uwabami, only being scouted alongside Kendo for being attractive enough to be in her commercial. Momo loses confidence in herself and becomes hesitant and nervous during the final exams, seeing herself as not strong enough. However, her confidence is restored with the help of Shoto Todoroki who helps her overcome this and pass.

Creation: Momo's Quirk allows her to create any non-living object or material as long as she knows the molecular structure of whatever she is making. This works by her transforming her lipids and fat cells into her creations, meaning that calories essentially act as production material. Momo is capable of creating anything she thinks of as long as she has the structure and design in mind. It has shown to take longer to create objects of bigger size.

Due to Creation using Momo's body fat (likely the reason for her slim figure), she is required to eat more in order to replenish strength for her Quirk. Furthermore, overusing this power can result in Momo becoming frail, skinny and possibly anemic.

Overall Abilities: Momo is a recommended student, which implies that she must have a very good level of skill. Her abilities earned her 1st place in the Quirk Apprehension Test, an impressive feat considering almost all her classmates had at least one superhuman result and the end result was cumulative of all eight tests. Momo was able to hold her own against Fumikage Tokoyami, for short period of time during the U.A. Sports Festival.

Genius Intellect: Momo is ranked to have S-class intelligence, being a genius. Her analytical skills are strong, easily devising strategies and plans in battle and urgent situations, which she has no trouble putting in motion due to her Quirk's versatility. Academically speaking, Momo is highly efficient, having been ranked 1st place in the mid-terms of her class, and understanding the composition of anything she wishes to create using her Quirk. The latter is a complicated task for even the simplest materials. Regardless, Momo commonly uses the objects from her Quirk to provide auxiliary support for her allies, as well as blindside her opponents, making her a very crafty individual, and reliable comrade. What she lacks in raw strength and destructive power, she makes up for with her ingenuity. When she was paired with Shoto Todoroki, against Eraser Head for the Final Exams, she realized that the Eraser Hero's Erasure Quirk has a smaller time limit due to the injury he received from Nomu at U.S.J, and capitalized on that small interval to blindside Eraser Head and secure victory for her and Shoto.

During the Joint Training Battle, Momo demonstrated her ability to anticipate unexpected circumstances; she took notice of the opposing team having a two-fold plan. Shoto even stated that thinking and planning under pressure or in times of crisis is Momo's area of expertise. She also has good judgment, being fully aware that once Itsuka Kendo took the match to her own strong suit: close-quarters combat, Momo herself wouldn’t stand a chance. Even when overpowered by Itsuka, Momo effectively blindsided the big-fisted heroine by creating a cannon at point-blank range, making it look like she was going to fire it at the latter. Taking advantage of Itsuka's startled reaction, Momo quickly turned the cannon in another direction and fired her lucky bag over the wall of letters to give extra support to her teammates. Even though Momo provided assistance to her teammates, she was incapacitated by Itsuka, but not before the recommended student managed to tie herself to the latter before losing consciousness. 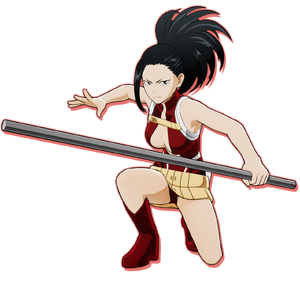 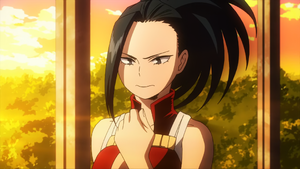 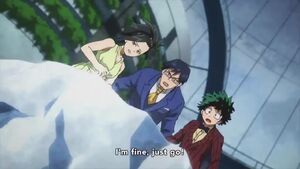 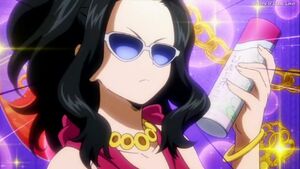 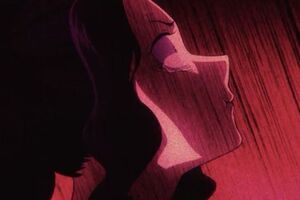 Momo stricken with fear by the appearance of All For One. 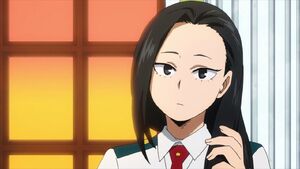 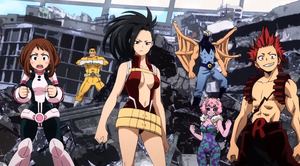 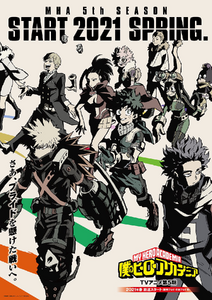 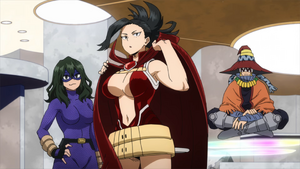 Momo with Setsuna at their internship with Majestic. 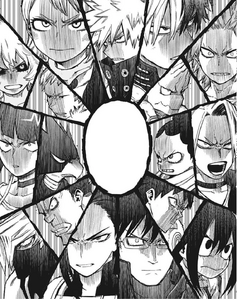 Momo and Class 1-A prepares to face All For One