In Love
Momoka Nishizawa is one of the main characters in Sgt Frog.

Momoka has peach skin and sky blue hair with mulberry eyes. She mostly wears her clothes as with puffy sleeves.

Momoka has two personalities. Her first and most commonly viewed personality is a cute, polite, shy and sweet girl (based on her parents). In this personality, she acts as a weak girl and cannot unleash her true power. Her second is brutal, hot-tempered, and incredibly strong (based on her mother). When phasing to her brutal side, you hear a sound similar to that of a sword sharpening or being unsheathed. The four soft spikes on her head then sharpen, and her expression changes. This personality is triggered by feelings of anger and frustration. However, a third one appears as an effect of the personality transfer, in which she absorbs the rest of the personality of her father. 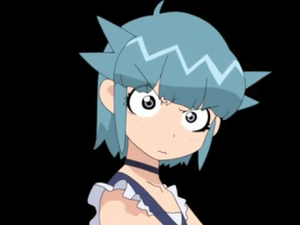 Add a photo to this gallery
Retrieved from "https://hero.fandom.com/wiki/Momoka_Nishizawa?oldid=2217746"
Community content is available under CC-BY-SA unless otherwise noted.