Mona Lisa is an anthropomorphic, lizard-like female character who is often associated with Raphael and the love interest of Raphael.

She was voiced by Pat Musick, who also voices Tony Toponi and Elsa Frankenteen.

She was a college student who majored in physics. One day, while on a fishing trip with some friends, a pirate named Captain Filch attacked their boat. Though her friends were able to escape, Filch kidnapped Mona Lisa and tried to convince her to help him with his experiments on his submarine, so he could take over the world. Mona Lisa played along, and one night, she tried to destroy his nuclear reactor and was mutated in the process. After this, she vowed to stop Filch.

She and Raphael met in the episode 'Raphael Meets His Match', when Filch was holding a yacht full of people hostage and teamed together to stop him. Afterward, she followed the Turtles back to New York, but was never seen again.

Based on her interaction with Raphael and the episode's title, she was supposed to be his love interest. However, like Lotus Blossom (who had one more episode), we never see or hear about her after her appearance. 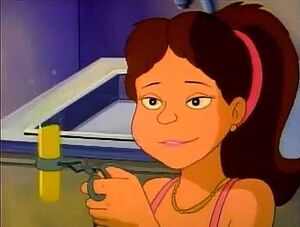 Mona in her human form 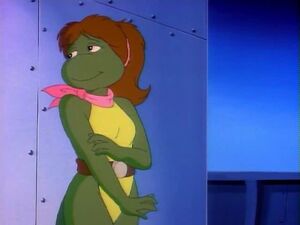 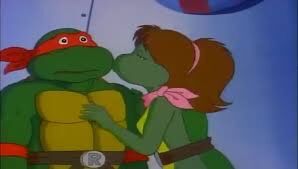 Retrieved from "https://hero.fandom.com/wiki/Mona_Lisa?oldid=2241178"
Community content is available under CC-BY-SA unless otherwise noted.