Get rid of Ripto (succeeded).

Moneybags is a minor antagonist in the Spyro series.

He is a greedy bear who first appears in Spyro 2: Ripto's Rage!, where he charges Spyro a "small fee" of gems in order to progress through the game. He charges these fees for anything, from learning to swim to opening a bridge, and they are usually outrageous. In Spyro 3: Year of the Dragon, he is more villainous when it is revealed that he and the Sorceress made a deal to hold her enemies ransom so Spyro could pay a "small fee" for their release. Although still infatuated with gems, he seemed to have reformed in Spyro: Shadow Legacy, having started a family and opened shops.

Moneybags owns a castle in Summer Forest, Autumn Plains, and Winter Tundra, which are all under the symbolic and peaceful blue and white banner of the realm of Avalar itself until each had been usurped by the nasty wizard Ripto. He wishes to lay claim to the gems Spyro collects and is seen at many plot-crucial points in the game. After Ripto's defeat, Elora forces Moneybags to reimburse Spyro by handing over all the gems he collected, to which he strongly objects.

Moneybags returns with more evil intentions. He has worked out a deal with the Sorceress to hold her enemies (Shiela, Sgt. Byrd, Bentley, and Agent 9) captive and ransom them to Spyro for outrageous fees. Following the Sorceress' first defeat, he plans to sell one of the dragon eggs in Avalar for some quick cash, only to be intercepted by an infuriated Spyro. After an exhausting chase, Moneybags resolves to retire as a haiku poet in Spooky Swamp.

Unlike the previous two games, he only appears once in the Dragonfly Dojo. He makes Spyro pay him 200 gems to use his magic to help Spyro cross a chasm. Unlike previous games, he never reimburses Spyro. He has apparently gone through with his plan to become a haiku poet and mentions that the shine of gems is an inspiration for his poetry. (He was most likely meant to appear in other levels, but didn't due to the makers rushing the game's release.)

Moneybags is arguably redeemed in this game, has started a family, and is considerably friendlier. His wife and four sons share his obsession with gems. Instead of charging Spyro fees at various points in the game, he has opened a proper business and has his sons sell goods to Spyro.

Moneybags is shown to be very greedy, what with charging Spyro many fees. He is also shown to be in denial that his fees are expensive, often referring to them as "small fees" and always claiming that it's Spyro's own fault he can't pay the prices, accusing him of "squandering all his gems on knick-knacks and junk food" and "spending all his money on flirtatious fauns (or fanciful frivolities in the remake) in Fracture Hills" while saying "Now don't go blaming me, I've given you nothing but bargains".

He can also be rather smug and arrogant, as he insisted that Bentley and Sheila showed gratitude toward him for letting them out despite the fact that he was the one keeping them locked up in the first place. While he was still rather friendly and affable toward Spyro in his first appearance, he is shown to be far more unscrupulous in Year of the Dragon, as he at one point makes Spyro pay him to learn the password to open a tomb, but than says the password is "gullible" and admits that he was actually standing in front of the wall switch. He also shows a shocking lack of empathy when he tells Spyro not to worry about Sheila the kangaroo, as she will likely be executed next Thursday. If Spyro refuses to pay him to raise the steps in Charmed Ridge, Moneybags even insincerely says that whenever he thinks about the fairy princess being captured he gets sad, showing he does not care what happens to her.

By the later games, he seems to have turned over a new leaf, as he runs legitimate businesses instead of extorting Spyro. In A Hero's Tail he strangely is a far friendlier and more compassionate person simply making his way in the world, and for some reason speaks in a Russian accent instead of an English one. Some speculate this may be a separate bear to the one in the other games, but this is unconfirmed. 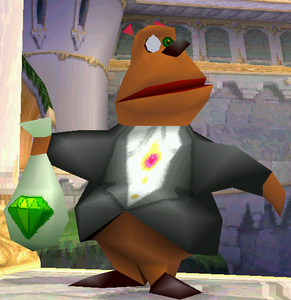 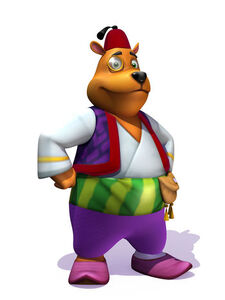 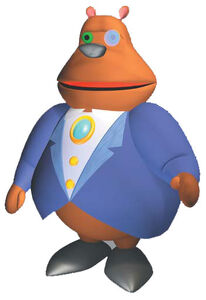 The "avaricious, duplicitous, larcenous ursine" as described by Bentley the Yeti. 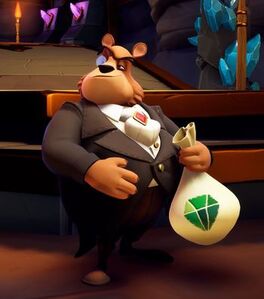