Bucktoothed
Shorty (all insults by the bad boys)

Beating the ones that bully her with her bunny.

Monica (Mônica​ in the original) is the titular main protagonist of the franchise of comics and cartoons Monica's Gang, making her debut in 1963 as a support character for Jimmy Five's comic strip, Cebolinha. She is a Brazilian 7-year old girl.

Don't be fooled by her young age or how small she is! Monica seems helpless and innocent to the sight of an adult, but she actually hides a great strength and a very enviable bravery for her age and size. Always with her stuffed bunny named Sansão, and she is often the target of bullying by the boys of the street she lives. These bad boys torment her, but Monica can defeat them thanks to her super strength, allowing her to beat them as a way of revenge for abusing her like a scapegoat.

Because of her superhuman strength, Monica also becomes coveted by many powerful and dangerous villains who try to cause chaos and disorder, but she always beat them as a good heroine. Her biggest rival is named Jimmy Five (who is occasionally her friend and ally) and her best friend is Maggy.

Mônica is also extremely resistant, as seen when she was shrunken and got accidentally trampled by Cebolinha in the episode "Poeirinha Mágica" (Little Magic Dust), who didn't even notice her because she was so small.

Originally Monica was introduced in 1963 as the sidekick of Jimmy Five, but over the years, she has taken his place as the main protagonist. Since then she has become a very popular character in the media appearing in cartoons, video games, toys, she earned her own comic book series after 1970.

Mônica wears a red shirt with short sleeves. Her feet are slipper-like, having no toe on their end. She has short, black hair. She carries a stuffed blue bunny named Samson around with her. She has no pants, so her white underwear is visible.

Monica is a Brazilian girl who lives in the Limoeiro neighborhood along with her parents Mr. Sousa and Miss Luísa. She appears to be just a normal naive child that has a few friends, and who lives being tormented by bad boys of the neighborhood who bother her with the provocative nicknames (such as chubby, bucktoothed, and shorty) besides frequently stealing her stuffed bunny Sansão to beat it up and tie his ears. But Monica is not a helpless girl at all; she has a huge strength that is greater than a normal human and is capable of hitting several boys at once (usually using her bunny as a weapon).

Because she is always using her super strength as a defense to anyone who abuses her, Monica becomes frequent target of plans to defeat her. Her main rival is her neighbor Jimmy Five, a boy obsessed with his wish to dominate the street and that is the boss of all the bad boys who abuse Monica like a scapegoat. Jimmy Five always creates plans (according to him "infallible") to defeat Monica that normally involves his best friend named Smudge as his personal "henchman". These plans always involve disguises and acting to deceive Monica, or inventions, designs and even magical powers. However, in the end, Monica always defeat and beats up Jimmy Five and his friends.

When she is not defeating the plans of Jimmy Five, Monica is always walking with her ​​best friend named Maggy. Unlike the boys who always annoy her, Monica is a good friend with all the girls of the neighborhood. She always gets along with the girls and they always play with dolls or doing parties. But she is also a victim of the contempt and abuse of a rich preppy girl named Carminha Frufru, who hates Monica and her good relationship with the girls, and because Monica always win the love of the boys despite everything, mainly Jimmy Five who is frequently jealous of Monica, because he also loves her despite their bitter rivalry. 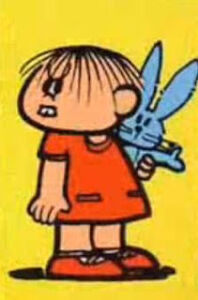 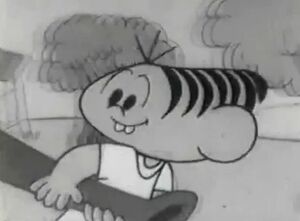 Monica in a black and white commercial 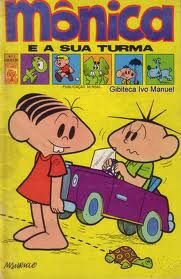 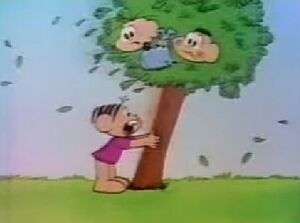 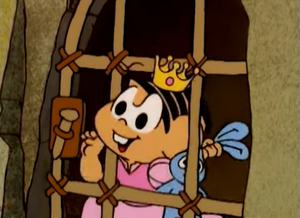 Princess Monica makes herself a prisoner of a monster 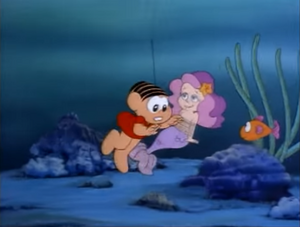 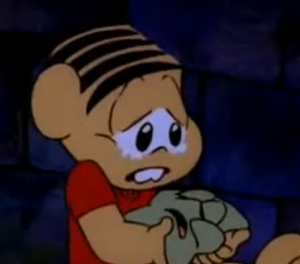 Monica crying for her star friend 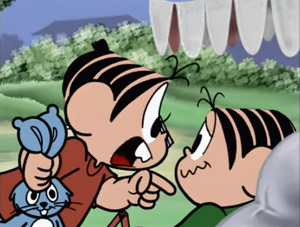 Monica debunks Jimmy Five who was pretending to be her 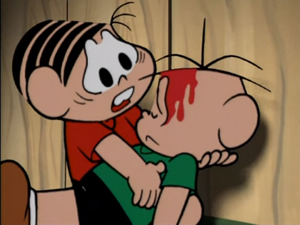 Monica is deceived by Jimmy Five who is using fake blood 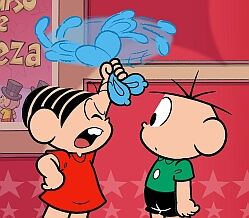 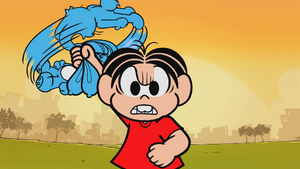 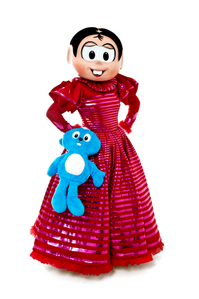 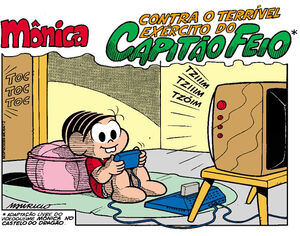 Monica in the comics 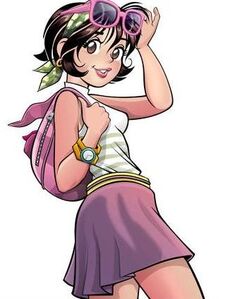 Monica as a teenager
Add a photo to this gallery

Retrieved from "https://hero.fandom.com/wiki/Monica_(Monica%27s_Gang)?oldid=2052374"
Community content is available under CC-BY-SA unless otherwise noted.