Monkey D. Garp is a Marine vice admiral, who is the supporting character of One Piece. He is the father of Monkey D. Dragon, the paternal grandfather of Monkey D. Luffy, and the adoptive grandfather of the late Portgas D. Ace. He takes charge of both Coby and Helmeppo's training. After the war and Ace's death, he retired but became a Marine Instructor to new recruits and new generation.

Garp fought Roger many times during the golden pirates era. Over 40 years ago, Garp formed an alliance with Roger fought and defeat Rocks D. Xebec and his crew which earned Garp the title as a hero of the Marines. 30 years ago, he fought and defeated Chinjao, a notorious pirate worth over 500,000,000 berries After Roger's execution, Garp adopted Ace into his family after his mother Rouge died due to blood loss to give Ace birth. 12 years ago, he trained his grandson Luffy brutally by tossing him into the bottomless ravine, left him into the jungle every nights and sending him flying with balloons, but he only did that to make him a strong man as a result of his strength and durability. He always punched Luffy with his fists due to him wanted to be a pirate instead of a marine.

He was introduced in the series as one Vice Admiral who appeared in Garp and Helmeppo's story cover and then became in their Instructor.

After Ace's death, Garp resigned as a marine but kept his title and record to instruct new recruits of young Marines. After 2 years, he became a laid-back old man and doesn't get bothered by his grandson's fame when both Yonkos Kaido and Big Mom are after Luffy.

Before the Great Age of Pirates

Monkey D. Garp is a Marine hero, who was famous for cornering and fighting the late Pirate King, Gol D. Roger numerous times in his career. Garp is considered by Whitebeard as one of the few people that know the seas from the time of Gold Roger. A proof of his strength is that he was offered an admiral position many times from Fleet Admiral Kong, but he refused every time. The reason for this being that, Admirals are the direct subordinates of the Celestial Dragons.

At some point in his life, Garp settled down and started a family with an unknown woman and had a son named Dragon.

As part of his duty, in the past he chased other pirates like Shakuyaku, while nearly killing Chinjao.

Prior to Roger's execution, the Pirate King requested that Garp would take care of Ace, as he thought Ace did not deserve to be branded a criminal due to being born into a family of a pirate.

When Shiki the Gold Lion attacked Marineford a week before the execution of Roger, Garp and Sengoku challenged him together. After a grueling battle that devastated half the town, they managed to defeat him, and (according to a marine) Garp was left heavily injured. A number of months after the Pirate King's death, Garp protected Ace as Roger had hoped, and was present at Ace's birth that killed Rouge and afterward took Ace to a secret location to be raised by Dadan. Garp would visit Ace during his vacations and would try to convince Ace to become a Marine.

As a Vice Admiral of the Marine Headquarters, Garp has command over all lower ranking soldiers. An example of this is when after Morgan escaped, he was able to take away two of Ripper's subordinates (Coby and Helmeppo) and make them his own subordinates instead due to him having the higher rank. Also as a Vice Admiral, he had the potential to be called upon to be one of five vice admirals leading a fleet of ten battleships during a Buster Call.

Garp is one of the most powerful fighters seen in the series so far. Although rather old, Garp still possesses an incredibly high amount of physical strength. He is able to throw iron cannonballs as if they were baseballs (at faster than cannon speeds), break through brick walls and cannon stands with his fists, and both carry and throw a gigantic ball and chain many times bigger than the Thousand Sunny. Garp also has a monstrous punching ability at his disposal, with his epithet, "Garp the Fist," vouching for his punch strength. His unorthodox training regime was what enabled his grandsons Luffy and Ace to become very powerful fighters in their own right. Further showing his true depth as an instructor was that he made Coby and Helmeppo into seasoned fighters in months.

In terms of combat, Garp has had several decades worth of experience in both combat and navigating the harshest oceans within the volatile "New World". He's also a "hero" of the Marines and as is known for cornering and fighting Gol D. Roger many times. Roger also stated that he and Garp had almost killed each other on numerous occasions. As another true testament of sheer power, Garp defeated and nearly killed off Don Chinjao in the past, whose bounty was worth around 500,000,000 in his prime and was said to be able to split a continent with a headbutt.

He also has leadership skills, being a Marine vice admiral and the commanding officer of the 153rd Marine Branch.

In addition to his legendary strength, he has incredible durability and pain-tolerance, as seen when he was slashed by Captain Morgan's axe hand, only to recover only seconds later, with no obvious pain and apparently being oblivious to the fact he was struck at all. This was due to the fact he fell asleep before he was being attacked. He was able to get back on his feet after being punched by Luffy in Gear Second at point-blank range without losing consciousness and we have to take note that the punch was made possible only because Garp allowed Luffy to land the strike. And even after that punch, he was able to fight the Blackbeard Pirates along with Sengoku.

Garp is also very agile, as he jumped high into the sky and intercepted Marco, as he was flying to save Ace.

He has also been shown to be extremely fast as he managed to bypass all of the Straw Hats in order to get to a sleeping Luffy. It is evident Whitebeard respects Garp's strength as he mentioned him during his talk with Shanks. It should also be noted that Garp is not seen to carry any weapons, aside from the cannonballs that he throws, which implies that he is most likely a hand-to hand fighter. Another example of Garp's strength is when he was able to easily strike down Marco of the Whitebeard Pirates, despite the latter having his Devil Fruit abilities activated at the time, knocking him back which was something that Kizaru and Akainu seemed unable to do.

The extent of Garp's power and fame is evident round the time of the Battle of Edd War, three years before the future Pirate King died. It was revealed that he was offered the rank of admiral more than once, but repeatedly refused the promotion. Garp's subordinate at that time, Kuzan (later promoted to admiral), commented on how cool Garp was for refusing such an irresistible promotion to which he answers by stating that he does not need a higher position, and that it would reduce his liberty to do what he wants. While being officially ranked as a vice admiral, his power was once or still is enough to qualify him for the rank of admiral or even fleet admiral before he retired. It was later revealed that the reason he chose not to become an admiral is because he refused to be a subordinate of the Celestial Dragons.

Similarly, when it was revealed worldwide that Luffy is Garp's grandson, Luffy's fame rose based on that fact alone, as Demaro Black attempted to use that as one of the strong points in his impersonation of Luffy, and Charlotte Linlin referenced to Garp when Luffy challenged her.

Aside from his incredible mastery over Busoshoku Haki, Garp is also very knowledgeable of the other two types. Although not demonstrated to be a user of the other two types, Garp commented that Luffy has "inherited" Haoshoku Haki when it was subconsciously released. When Coby seems to have awakened Kenbunshoku Haki on his own, Dr. Fishbonen recommended that Coby ask Garp how to master it, suggesting he has enough expertise in it to mentor others.As a vice admiral, Garp is fully capable of using Haki. He demonstrates proficient usage of Busoshoku Haki, being able to injure Luffy several times, bypassing his rubber body. He was also seen crushing Chinjao's uniquely shaped head with a Haki imbued punch 30 years ago, by hardening his fist and turning it obsidian black to increase the damage inflicted. During the Battle of Marineford, he managed to punch and hurt Marco despite his regenerative phoenix form.

So far, Garp has been seen throwing cannonballs (including a giant one, mounted on a chain) with his bare hands. The cannonballs he threw soared at a faster velocity than when fired out of a cannon, due to Garp's monstrous strength. 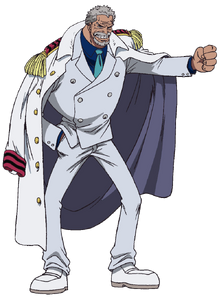 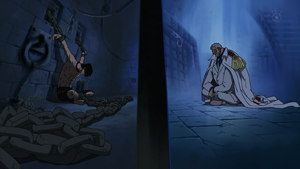 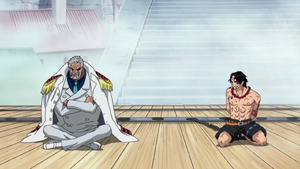 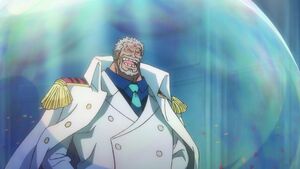 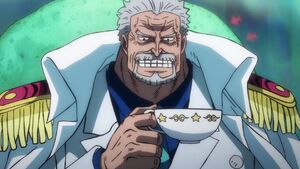