Moominpappa is one of the main protagonists of the Finnish book series.

He is the father of Moomintroll, the husband of Moominmamma and the adoptive father of Little My.

MoominPappa looks like moomin,but he has a Hat and sometimes he smokes a pipe.He is a humble father.He has a shotgun in his basement but he barely use it,he only use it when for example The Groke is at the Moominhouse.

In the 1990 series, Moominpappa is voiced by Peter Whitman and in the 2019 series Moominvalley, he is voiced by Matt Berry, who also voiced Bubbles.

MoominPappa`s life as a child was a bit tragic but also had many happy and epic events. He had no parents and he was left outside in front of a orphanage.Where a Fillyjonk works (in the original book of Tove Jansson it was a female hemul)he grew up in the orphanage and his time there was hard because The Fillyjonk or The Female Hemul was very harsh.She even judged MoominPappa for a single small mistake he did.One night decided MoominPappa to leave the orphanage after a walk on the ice.He got his bag and escaped the orphanage.

According to the tv-series when he walked into the woods in order to Leave the orphanage, it was very dark and creepy so MoominPappa started to see illusions or sights about Ghosts inside trees,monsters who looked like the groke,creepy hands and snakes. MoominPappa got scared and hid under a wood risen. Next morning however it was much better in the woods, MoominPappa met a figure named Fredrikson. They became friends and Fredrikson told MoominPappa that he together with The Joxter and the Muddler they are making a Big Boat and they are going on an adventure with it, MoominPappa decides to join them.

After they have been sailing for a while,they heard a Woman Shouting in fear and the growling of The Groke. MoominPappa jumped into the sea with the Muddler`s giant paint can and saves the woman who was chased by The Groke on a mountain near the sea.The woman was the Fillyjonk from the orphanage.And stuff started to be a pain again on the boat since The Fillyjonk took command over the boat even if Fredriksson made the boat and was the captain. However a herd of so called klipdassar (english:Niblings) jumped up on the boat and kidnapped The Fillyjonk (or the Female Hemul) but MoominPappa and his friends had more luck since they did not get kidnapped and they continued with their journey across the sea with their boat.

After an another while somekind of pink clouds came down to the boat,They were soft and worked like cotton or a mattress.And the mysterious clouds made the boat fly over Stormy clouds. Later they found themselves on a island. MoominPappa,The Joxter and the Muddler started to explore the island and found a mini house like building that looked like it was for chickens. Inside that mini house they heard a girl`s voice who said that there was no one there,but The Muddler doubted that there is no one there. The door opens and the girls explain everything why she was inside there. Also she explains that The King of the Island has a party to celebrate the island`s 100th year so MoominPappa and his friends decides to go on that party.However when they go to the Party they get some suprises like a monstrous spider that gets revealed to be a fake spider just to scare visitor just for fun,sprouting water of a lake when they are on a rowing boat and a big maze.Finally they find themselves in the party and the king who is very old welcomes them and gives them permission to stay on the island and live there.After having a long party MoominPappa gets himself a house near the beach similar to the moominhouse.

in the third book of the moomins when Moomin,Sniff and Snufkin finds a magical hat many things starts to happen.MoominPappa wears the Hat to see if it would fit to him but it was to big for him.When Someone throws an eggshell in the hat the Hat turns the eggshell into clouds that people can ride on and fly (similar to the magical clouds that MoominPappa saw as a child)and Moomin and his friends starts to ride on them.

However MoominPappa does not really like that so he tries to stop them.After other events caused by the hat,two friendly figures known as Thingumy and Bob visits the moominhouse. They claim that they are chased by The Groke. MoominPappa knows what to do so he takes his Shotgun and informs his family to arm themself.Later The Groke is outside the house but later leaves the place because of MoominPappa having a shotgun and of course the others were armed (although MoominPappa did not use the ShotGun). 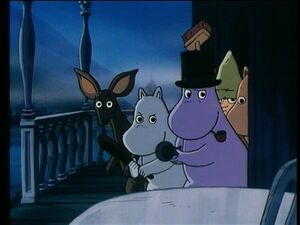 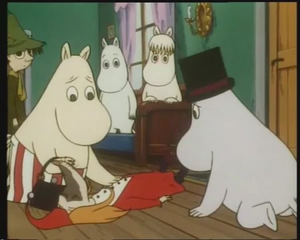 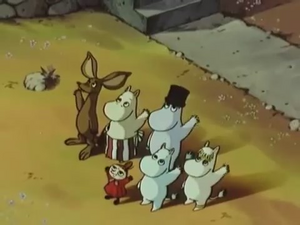 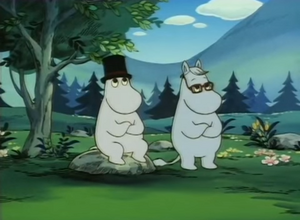 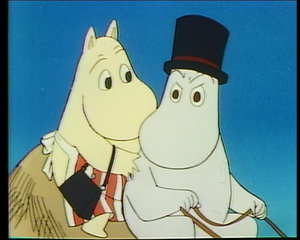 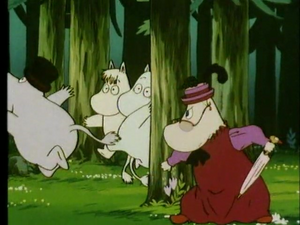 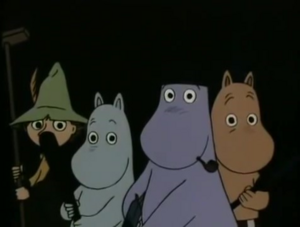 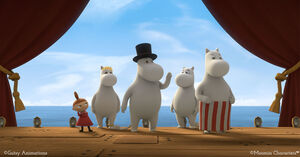 Moominpappa with Moomintroll, Moominmamma, Snork Maiden and Little My in Moominvalley 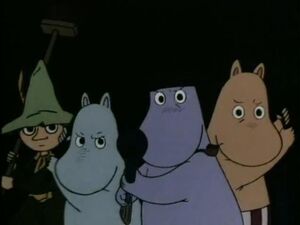 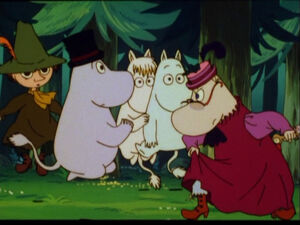 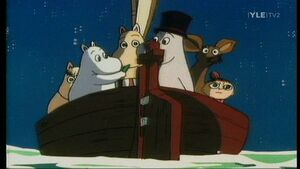 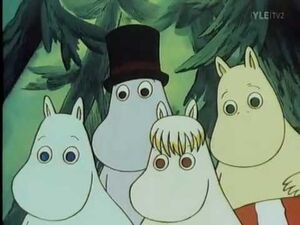 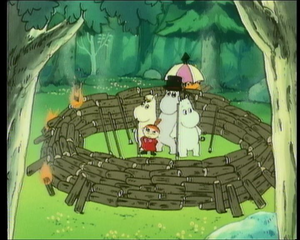 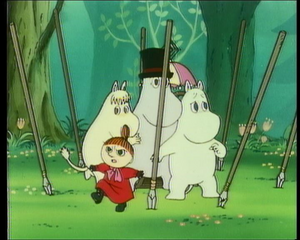 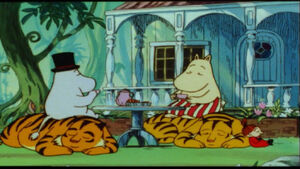 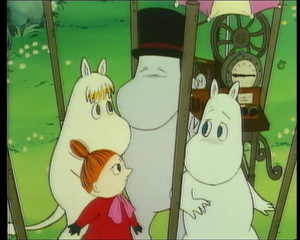 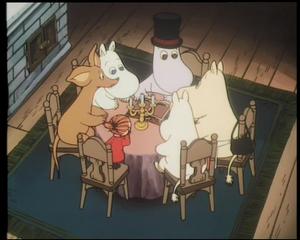 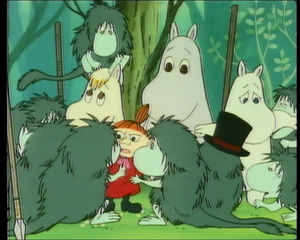 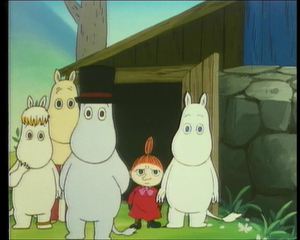 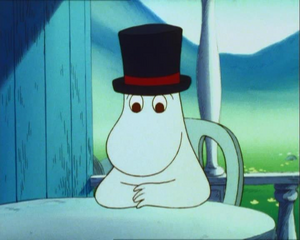 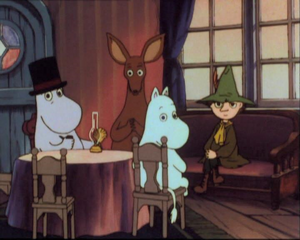 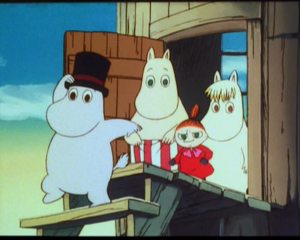 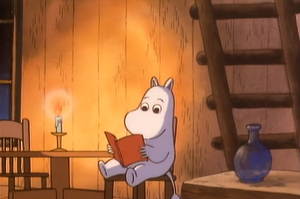 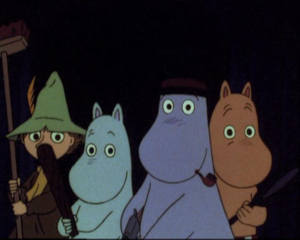 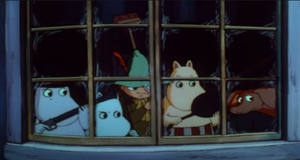 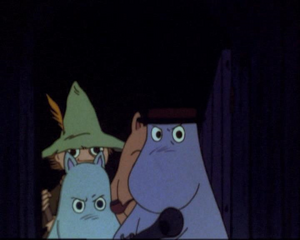