To become the Champion (succeeded)

Kid
Moon is a Pokémon Trainer and the female protagonist in the games Pokémon Sun and Moon, Pokémon Ultra Sun and Ultra Moon and one of the two main protagonists alongside Sun and at the end of the games, they become the first-ever Champion of the Alola region.

Moon wears a red tuke (which has a flower-like top) sitting on her shorter black hair that surrounds her pale face. She has slate-grey eyes like her male counterpart. She also has a loose light yellow t-shirt with light pink and goldenrod flora patterns spread across it, along with very small green shorts and finally wearing red and black shoes with large yellow laces. To complete her outfit, she has a grey Z-Ring on her left arm. She is then seen standing on her right leg while holding back the other as she is holding a PokeBall within her left hand. Moon is shown smiling too. Thus, she seems to have much more enthusiasm than her male counterpart, Sun.  However, like in previous games, her appearance is customizable.

In Pokémon Ultra Sun and Ultra Moon, she has a new outfit. It consists of an orange shirt with red flowers, white shorts and black and white shoes. Her hair now has braids but is the same color. On her head, she wears a yellow porkpie hat with a flower in it. Like in the original Sun and Moon games, Moon is also smiling here. It also seems like she is jumping for joy.

Moon is shown to be caring for Pokémon, curious and adventurous. Her father is never seen in-game and she is alone with her mother and her Kantonian Meowth instead of an Alolan Meowth.

As the player, Moon is the main protagonist of the game who moved to Alola from Kanto. Over the course of the game, Moon makes some new friends. She befriends Hau and Lillie and meets a Cosmog nicknamed Nebby who goes on to evolve into Cosmoem first then later into either Solgaleo or Lunala depending on the version. She travels around the region, simultaneously enjoying her vacation and beating back Team Skull at the same time.

Unlike previous games, she does not appear if she is not selected by the player.

Moon has a counterpart who shares her name. She is a pharmacist. 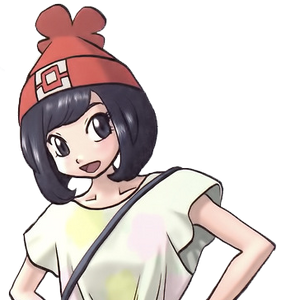 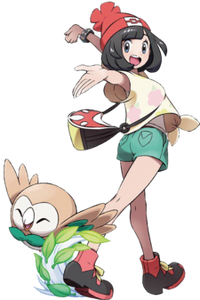 Moon and her Rowlet. 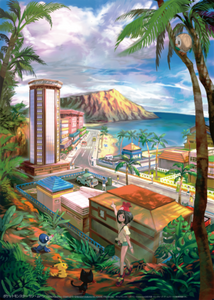 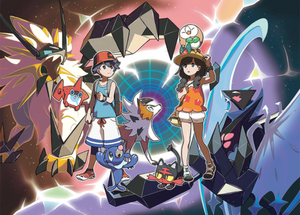 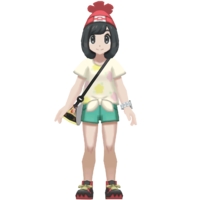 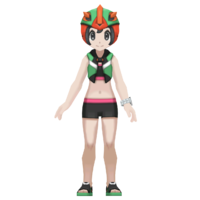 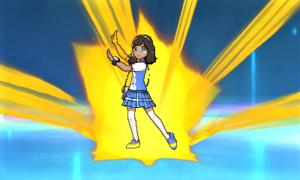 Retrieved from "https://hero.fandom.com/wiki/Moon_(Pok%C3%A9mon)?oldid=1715765"
Community content is available under CC-BY-SA unless otherwise noted.