Tak and the Power of Juju

Protector of the Pupanunu Village

Regain her powers back from Tlaloc, and allow Tak to fulfill the prophecy (succeeded),

The Moon Juju is a powerful Juju and a major supporting character in the Tak and the Power of Juju series.  Having gained her power from the three scared moonstones of the Moon Temple, she is considered the most powerful Juju by the Pupanunu Village, whom she cares for and protects deeply (especially the warrior Tak ).  She has two daughters:  Flora and Fauna, whom like her mother helped Tak throughout his journeys in all games.

She is voiced by Tina Illman.

The Moon Juju is a very beautiful Juju, with a fairly tall stature and purple skin.  She has purple, medium-length hair and wears pink eyeshadow.

She wears a long lavender silk gown with purple swirls on it.

Tak and the Power of Juju

In the original game, Tlaloc and his minions Pins and Needles steal the moonstones from the Moon Temple.  As a result, the Moon Juju loses her powers.  Tlaloc uses the stolen power to transform most of the villagers of the Pupanunu Village into sheep, including Lok.  One of the remaining villagers, a young boy named Tak is taked by the village's shaman Jibolba, as well as the Moon Juju's daughter Flora to locate the stolen moonstones in order to restore her power back to her. Tak locates the three stones and returns them to Jibolba, who then performs a ritual to restore the power of the stones back to the Moon Juju.  Afterwards, the Moon Juju reveals to Tak that he is the one mentioned in the prophecy to save the village from Tlaloc, and not Lok as many people originally thought.

Tak 2 : The Staff of Dreams

The Moon Juju makes a brief appearance during the Moon Juju's Interlude where she allows Tak to choose one of four Spirit Animals (either an eagle, a dragon, a pirhana, or a jaguar), but suddenly disappears before revealing to him which one is the best choice.

The Moon Juju plays a much larger role than her previous appearances.  She acts as the host of an event known as the Great Juju Challenge, which occurs once every 60years, in which various tribes, including the Pupanunu VIllage and the evil Black Mist Tribe compete in to win her favor and support for whatever the winning tribe desires (whether it be good or evil).

After the Black Mist Tribe reveals their intention to burn down the Pupanunu Villlage using the Moon Juju's power after they win the challenge, Tak confronts the Moon Juju about this, to which she reluctantly reveals that as heinous as it sounds, she must respect their wishies if they win.  Nonetheless, the Moon Juju tries her best to allow the Pupanunu Tribe to win the challenge by having her daughters grant Tak and Lok extra Mana to avoid being eliminated.

During the final challenge, the Black Mist Tribe uses the power of the Dark Juju to cheat.  The Moon Juju spots this, and disallows this from happening and allowing the Pupanunu Tribe to win the challenge and regain her favor once more. 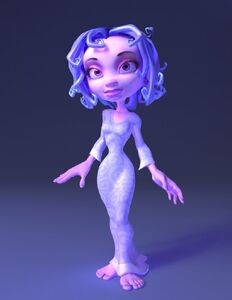 Add a photo to this gallery
Retrieved from "https://hero.fandom.com/wiki/Moon_Juju?oldid=1857427"
Community content is available under CC-BY-SA unless otherwise noted.