Kill Randall for the death of Lisa.

Protect Marlene from Raul Bushamn.
Shut down the Committee (succeeded).

Moon Knight (real name Marc Spector) is a fictional character and superhero created by Marvel Comics, appearing as the main protagonist of his titular comics, and a supporting character in other individual comics.

He was a former soldier turned mercenary who lead a life of violence until he was chosen by Khonshu to become "Moon Knight", as a way to redeem Spector and protect the innocent. Becoming a vigilante, he initially starated off as antagonist to Werewolf By Night, but would later get his own series as the main character. Though he appears as costumed hero, Spector has four separate identieis such as the wealthy businessman "Steven Grant" and taxi driver "Jake Lockley". He has been a member of the Avengers, Secret Avengers, Avengers West Coast, the Defenders, and the Midnight Sons.

He was created by Doug Moench and Don Perlin, and first appeared in Werewolf by Night # 32 in August of 1975.

He is a superhero who draws his powers from the moon and battles crime as a street-level hero akin to Batman, but also being possessed of an even more pronounced lack of mental stability. Throughout the character's existence Moon Knight has been depicted as everything from a victim of Multiple-Personality Disorder to delusions and hallucinations.

These various and often crippling mental disabilities sometimes impair Moon Knight's judgment and in turn cause him to frequently behave in a decidedly ruthless manner that puts him at odds with most other superheroes, many of whom view him as dangerous and unstable. Nevertheless, Moon Knight has still sometimes worked with other heroes, primarily Spider-Man (who is one of the only superheroes who is able to see the good in Moon Knight) and the Punisher (whose brutality exceeds even Moon Knight's own). In a sense Moon Knight stands as a gray middle ground between the extremes of his two chief costumed allies.

Moon Knight first acquired his powers after a near-death experience during his time as a soldier of fortune. Taken to the temple of the Egyptian Moon God Khonshu, Marc Spector was miraculously restored and from there refashioned himself into the costumed crusader he is today, battling evil of all shapes and sizes in Khonshu's name and abandoning his previous identity as a selfish mercenary.

This doesn't mean that Moon Knight is now a nice guy. As said above he frequently indulges in acts of brutality that most superheroes frown upon, and his clear mental instability only serves to further isolate him from his costumed peers. As such when Moon Knight fights evil, he often does so alone.

Marc Spector is the son of Elias Spector, a rabbi who was able to escape from the Nazis during the second world war. As a child, Marc would see his father be discriminated, and wondered why he never fought back against his persecutors. The beginning of his trauma happened when a close friend of the family, Yitz Perlman, was revealed to have been a Nazi who was a serial killer, killing Jews alike. Marc was able to fight against Perlman, but developed dissociate identity disorder. Though Elias was going to send his son to hospital, Marc was approached by the Egyptian God Khonshu, and was enthralled to leave his father's funeral.

Spector joined the U.S. Marine Corps, but was dishonorably discharged due to his superior's noticing his bizarre behavior. Marc then joined the CIA, where he would meet his brother Randall, who would later kill Marc's girlfriend, Lisa, to keep her from revealing a gun running scheme. Marc would attempt to kill his brother, throwing a grenade, and presumed he was dead. Leaving the CIA, Marc would meet and befriend "Frenchie" Duchamp, and the two became soldiers for higher, assassinating targets.

In Egypt, Marc and Frenchie took a job for Raul Bushman, where Duchamp showed his love for violence and murder. After killing archeologist Peter Alraune, Bushman attempted to kill his daughter, Marlene, but was stopped by Marc. Bushman retaliated by mortally wounding Marc, killing everyone except Frenchie, Marlene, and a villager who was willing to tell them everything on the tomb.

Marlene and the crew laid Marc under the idol of Khonshu, and he had an experience with the Egyptian God, who asked for his service to save his life, which he agreed. Marc would later believed the experience to be a hallucination, but went to punish Bushman and his men, but Raul escaped.

Afterward, Marc realized that he now had a purpose in life, and moved to New York with Frenchie and Marlene (who was now his lover). With his wealth and fortune, Marc created a costume, and used his different personas to aid him, as Steven Grant was a financer, and Jake Lockley was a cab driver who gathered information on a street level. Marc's first job was to capture werewolf Jack Russell for the Committee, but realized that they were going to turn Jack's sister in werewolf, and make them weapons. Moon Knight switched sides with the Russell's, and were able to shut down the Committee.

Moon Knight would face the Conquer-Lord by himself, but joined the Defenders to battle the Zodiac (who was the life-model decoy of the individual). Spector would later rescue Thing from Crossfire, who was William Cross, and team up with Spider-Man to defeat the Masked Marauder. In addition, he would have to face a serial killer dubbed the Hatchet Man, who claimed to be his brother Randall.

Moon Knight would do more investigations, and would later have to stop Bushman's ally, Midnight Man, who destroyed the idol of Khonshu. Marc felt powerless after the idol's destruction, believing that the God gave him powers. Marlene would create another idol, and tell him it was the original to let continue to fight crime. He did so, and face many villains, such as Morpheus Black Spectre, and the Fly, but was aided with the strength of Khonshu.

When he had to stop a Egyptian curse, Moon Knight briefly hosted the spirit of a priest of Khonshu, which helped him integrate his personalities, but he had a mental breakdown. Wanting to retire his personalities and from crime-fighting, he settled down with Marlene, and reconciled with his father's legacy. After selling the Idol to a gallery in Paris, he had vision that told him that he was selling it to evil. He donned the costume once again, but Marlene left him, unable to handle with his behavior. In the Valley of Kings, Moon Knight met three ancient priests of Khonshu, who told him that he was chosen as Khonshu's early champion.

Moon Knight joined the West Coast Avengers, but was not like due to not being a team player for the group. When Hawkeye's wife, Mockingbird had allowed the Phantom Rider to die (since he sexually assaulted her), Moon Knight was one of few he joined a splinter group. When discussing the Hellstorm on Phantom Rider's spirit haunting Mockingbird, Marc realized that Khonshu was in his psyche, and Hellstorm told the spirit off. Freed from Khonshu's meddling, he left the hero business, and reunited with Marlene as a crime fighter. 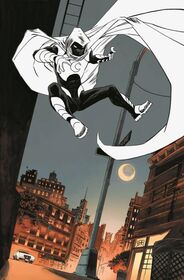 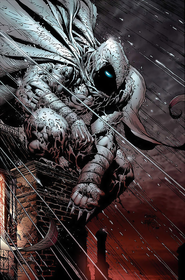 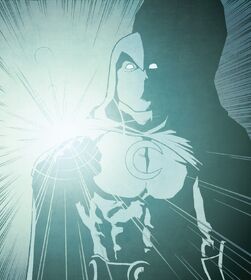 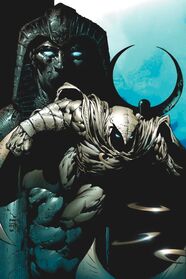 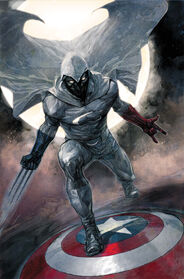 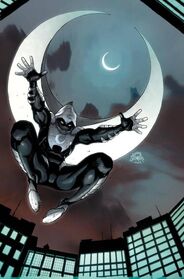 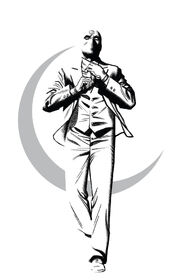 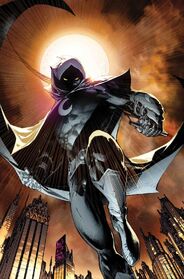 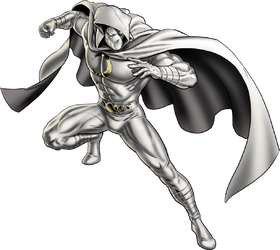 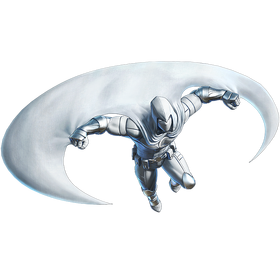 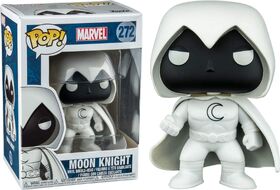