Morag Ladir is one of the characters of Xenoblade Chronicles 2. She is the Special Inquisitor of the Ardainian Empire. She is a Driver and is accompanied by her Blade, Brighid. She is called the "Flamebringer" (or "Radiant Young Noblewoman of Flame , Honō no ki kōshi in the Japanese release) and is known as the best Driver of the whole Ardainian Empire serving the Emperor Niall, who is her younger brother. She joins the party at the end of Chapter 4. Niall later grants Mòrag Aegaeon's Core Crystal after deciding he is unfit to be a Driver, she is the only member to drive him.

Mòrag is a straightforward and dedicated person. She remains deeply dedicated to the Ardainian military and does not engage in many frivolous activities. As Special Inquisitor, she is highly respected within the Empire and outside of it. As a hardened veteran of battle, she seems offended when Rex holds back against her in battle. She does remain quick to jump to conclusions, as seen when she attacks the party when a soldier mistakes Poppi with Lila.

Mòrag is first seen arriving in Torigoth after reports that the Aegis has arrived in the city. Consul Dughall takes her to Nia, and Mòrag manages to learn the names of Rex and Pyra. She then begins spreading false rumors that Nia and Dromarch were going to be executed to lure the Aegis to herself. Though Rex accuses her of wanting to use Pyra for herself, she claims that she must capture Pyra to prevent another conflict on the scale of the Aegis War. Rex and Poppi then knock down a water tower and temporarily weaken Brighid, allowing them to escape the city. Mòrag feels offended that Rex held back on her in battle as he deliberately missed an attack with Burning Sword. She resolves to not chase after them, insisting that their paths will cross again.

Emperor Niall and Aegaeon later meet with Morag and Brighid. Mòrag initially apologizes for not bringing the Aegis to him, though Niall dismisses this. Mòrag then learns that Jin infiltrated an Ardainian ship and stole a large cargo of Core Crystals. After this, the Ardainian Senate decided to resume excavating the Titan Weapons in Temperantia.

Morag later appears in Alba Cavanich. A soldier mistakes Poppi for Lila, and Mòrag engages in combat with Rex and company before Niranira comes out and reveals that Poppi is not the true culprit. Mòrag then agrees on a truce until Lila is found. After the Garfont Mercenaries find out that Lila is hiding out in the Old Factory, she reveals reports that a Nopon merchant is working there, and Rex assumes this to be Bana. She later helps Rex fight against Patroka and Mikhail at the Old Factory, though the members of Torna, alongside Bana, manage to escape on the Monoceros.

Mòrag then joins the party en route to Indol as a representative of the Empire. She reveals that upon seeing Mythra, she is curious to see what Addam's blade is capable of, and thus is not trying to stop the party. After learning from Praetor Amalthus that the Mor Ardainian Titan Weapon has advanced on Urayan forces, Mòrag and Brighid leave to investigate the situation. She then confronts Senator Roderich, leader of the pro-war faction of the Senate; while he does not agree with Niall's pacifist approach, he reveals that he did not issue the attack, and the party deduces that Jin ordered the attack. She joins the party as they journey to Temperantia, and with the help of Fan la Norne, they are able to stop the Titan Weapon; Fan la Norne is soon killed by Jin.

Mòrag then attends the Rulers Congress in Indol alongside Emperor Niall, Acting Chairman Niranira, Queen Raqura, His Highness the Crown Prince Ozychlyrus "Zeke" Brounev Tantal, and the Aegis Mythra. She provides eyewitness accounts proving that Mor Ardain did not issue the attack and that it was the work of Torna.

She helps the party defeat Bana one last time in Indol, who plans to use Giga Rosa to kill Raqura and Niall and thus start a war to profit. They defeat Bana, but he activates a self destruct feature that fatally wounds Niall. Mòrag is distraught by her brother's apparent death, but while Dromarch distracts the party, Nia assumes her Blade form and heals Niall back to health. Afterwards, Mòrag is skeptical to leave Niall's side, but Niall insists that she accompany Rex on his travels to Elysium. Niall also gives her Aegaeon's Core Crystal, as he believes he is unfit to be a Driver. 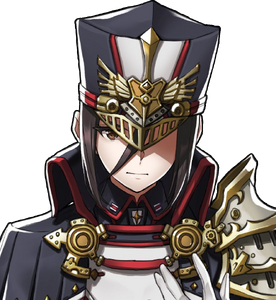 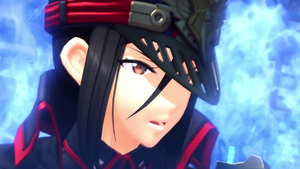 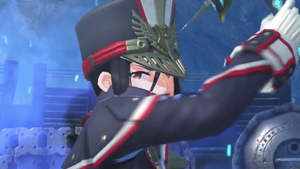 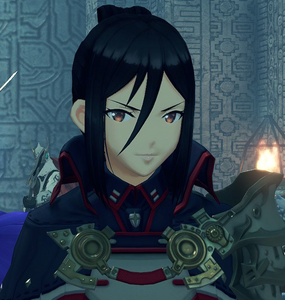 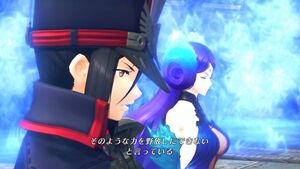 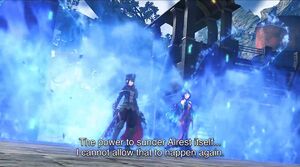 Add a photo to this gallery
Retrieved from "https://hero.fandom.com/wiki/Morag_Ladir?oldid=1743946"
Community content is available under CC-BY-SA unless otherwise noted.