Consultant for the Wangsheng Funeral Parlor.
Leader of the Adepti.
Member of the Seven (formerly).

Listening to the storyteller in Liyue Harbor.

Test the people of Liyue to see if they could handle a crisis (succeeded).

Morax, also known as the Geo Archon, Rex Lapis, the Exuvia, the God of Contracts, the Lord of Geo, and currently Zhongli, is a major playable character in the 2020 action role-playing fantasy video game Genshin Impact. He is the deuteragonist of Chapter I of the Archon Quests, the main protagonist of his Story Quest, and the final protagonist of the second Interlude Chapter act, Perilous Trail.

Morax is voiced by Keith Silverstein in English and by Tomoaki Maeno in Japanese. Silverstein has also voiced Robert E. O. Speedwagon in JoJo's Bizarre Adventure, Vector the Crocodile in the Sonic franchise, Torbjörn in Overwatch, and Aldebaran in Re:Zero − Starting Life in Another World. Maeno has also voiced U-1146 in Cells at Work!, Jet Link in Cyborg 009, and Reiji Kizaki in World Trigger.

Morax was a member of The Seven Archons who each governed a nation in the continent Teyvat for 6000 years. He was the founder and cultivator of Liyue, and was known to his people as "Rex Lapis." As the God of Contracts and Commerce, Morax helped improve upon humanity across the continent by inventing currency and teaching them about trade. During the Archon War, he threw stone spears, which would form what would now be known as Guyun Stone Forest, to seal the Overlord of the Vortex, Osial.

After guiding his people for thousands of years after the fall of the Guili Assembly due to the death of its leader Guizhong, the Geo Archon believed that humanity had evolved enough to stand on their own. Taking the human alias "Zhongli," Morax began acting as an enigmatic and knowledgeable consultant for the Wangsheng Funeral Parlor and plotted a crisis to test whether Liyue's citizens could act independently of him. There also was a myth that Morax was the one to kill Havria, the God of Salt, which eventually turned out to be false as her people killed her out of her own cowardice from giving up on her own people during the Archon War.

Zhongli struck a deal with the Tsaritsa of Snezhnaya and her servants the Fatui to awaken an ancient enemy of his named Osial, the Overlord of the Vortex. As he had hoped, Morax's faithful were able to defeat and imprison the ancient god once again. Believing that his work was done, Morax passed over his Gnosis to the Fatui and, having faked his death during the crisis, fully settled into a mortal life as Zhongli. He retired as one of the Seven with a final contract a contract ends all contracts. Eventually, he met Kun Jun, not being aware that he was being possessed by the already-savage Azhdaha's original, benevolent personality, who eventually led him to putting the vicious dragon to rest, only to realize that he also had to do it because of Erosion on his side.

Zhongli appeared one more time near the end of Perilous Trail to save Xiao, who sacrificed himself to bring the Traveler, Kuki Shinobu, Arataki Itto, Yanfei and Yelan out of the Chasm's underground mines through activating the Fantastic Compass. Aftewards, the Traveler can have a stroll with Zhongli who will sell the Archaic Stone to Iron-Tongued Tian, correcting the non-factual sections of his stories.

Morax was a deity capable of changing his physical shape at will. The one feature that remained unchanging across all his forms was the color of his eyes, which always glowed a bright amber. In ancient times, Morax was often depicted as a tall and slender young handsome humanoid male with pale skin and long black hair that was tied into a long ponytail at the back of his head with orange gradients. The power of the Geo element stained his hands, leaving orange-colored vein-like markings across his body and wears a single earring with a white tassel on his left ear. His current identity wears a tailored suit with dress shoes and wears black gloves.

Through the Eyes of a Dragon by Yu-Peng Chen 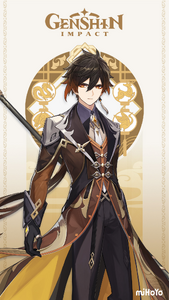 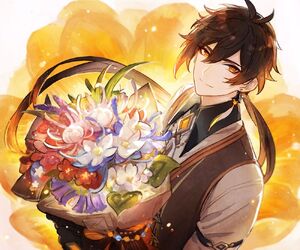 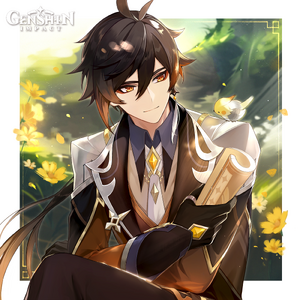 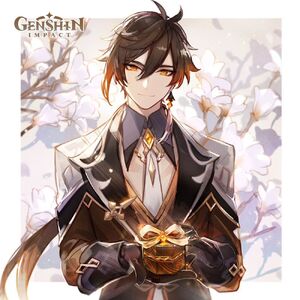 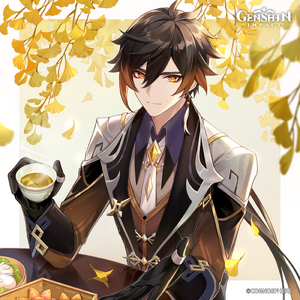 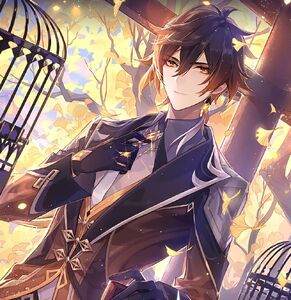 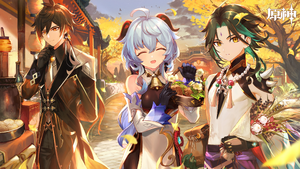 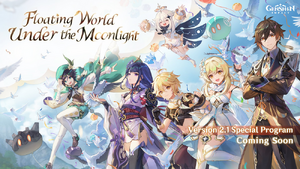 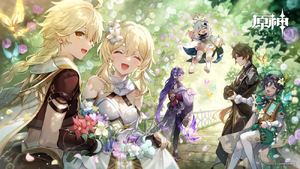 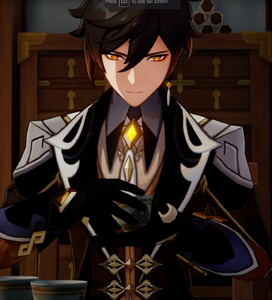 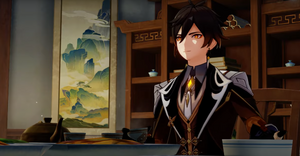 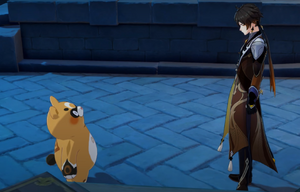 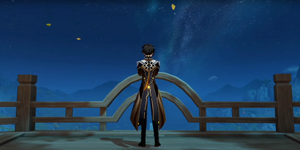 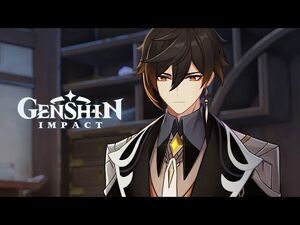 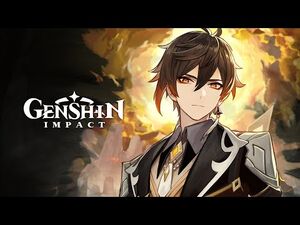