Trying to find a cure.
Trying to kill heroes (formerly).
Killing criminals.
Sustaining himself.
Trying to resist his desire for blood.

Find a cure for his pseudo-vampirism (ongoing).

Dr. Michael Morbius, or simply Morbius and better known as The Living Vampire, is a fictional character and villain turned anti-hero in the Marvel comic universe, and a (former) member of the rogues gallery of Spider-Man, Blade, Ghost Rider and Doctor Strange.

He was a famous biochemist who was suffering from a debilitating blood disease, and injected himself with vampire bat DNA in hopes of curing himself, but became a living vampire. Despite being introduced as an antagonist of a few heroes, in some versions of the universe, he is an anti-hero who has worked with Spider-Man and Blade, and was a member of the Legion of Monsters and the Midnight Sons.

He was created by Roy Thomas and Gil Kane, and first appeared in Amazing Spider-Man #101 in October of 1971.

In Spider-Man: The Animated Series, he was voiced by Nick Jameson. In the Sony's Marvel Universe, he will be portrayed by Jared Leto in the titular film of the same name.

Michael Morbius was born in Greece to Makarioa Morbius and an unnamed mother, and later became a scientist who won the Nobel Prize in biochemistry, and began dating Martine Bancroft at an unknown point in time.

Morbius suffered from a debilitating blood disease that was killing him, and he worked on developing a serum to cure him of the disease. Morbius developed an experimental treatment that involved him injecting himself with vampire bat NDA and going through electroshocks.

The side effects of the treatment turned him into a pseudo-vampire, gaining superhuman abilities, an aversion to sunlight, but changed his physical appearance, and he needed to consume blood in order to survive. Morbius' first victim was the assistant who had helped him develop the treatment, and anyone he bit to consume their blood, would become living vampires themselves.

Morbius traveled to the United States, and slaughtered a crew of people on a ship that he was on, and he later attempted to kill himself but failed. Morbius encountered and attacked Spider-Man, who was trying to cure himself of his six-arms, but their battle was interrupted by Dr. Curt Connors, who hand transformed into the Lizard. Morbius bit Connors and escaped the fight, and Connors partially returned normal due to the vampire bit.

Morbius would encounter other heroes, such as Blade and the Fantastic Four, but he managed to work with them on stopping other threats, such as Daemond. Morbius also became a hero in his own ways, such as saving Amanda Saint from the Demon Fire cult, and aiding Simon Stroud in stopping the Helleyes.

Later on, Morbius joined the Legion of Monsters, who united to investigate Starseed, an entity that randomly appeared. Morbius and the Werewolf attacked Starseed, as both were overcame by their hungers, but Ghost Rider and Man-Thing attempted to intervene. Starseed attempted to cure the Legion of their monstrous forms, but died from his wounds caused by Man-Thing due to suffering from great fear of the creature.

In the Ultimates comics, Morbius is a true vampire, being the son of Vlad Dracul, brother of Vlad Dracula III, and a relative to his brother's descendant, Victor van Damme. However, this version of the character shows himself to be struggling against his instincts. He encountered Spider-Man in a misunderstanding, and learns that Spider-Man's blood is immune to vampirism, and told the young hero if they met again, he would have to grow up. 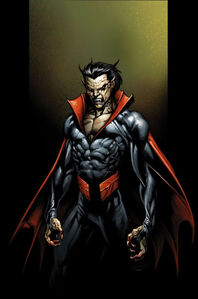 Morbius in the Ultimate Marvel comics. 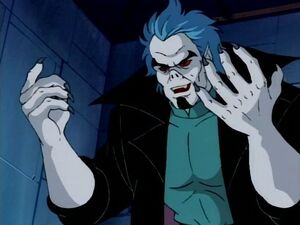 Morbius in Spider-Man: The Animated Series. 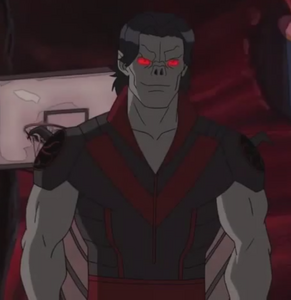 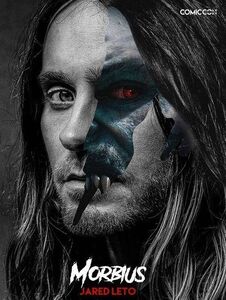 Jared Leto as Morbius, using his blood to attract the bats. 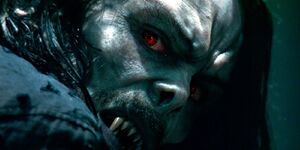 Jared Leto as Morbius in his vampire form. 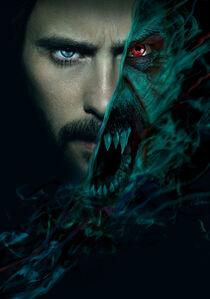 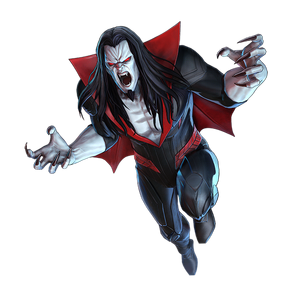