Saber of Red, Saber, The Knight of Treachery, Knight of Londinium, Guerrilla Knight

Saber-class servant of Kairi Sisigou.
Knight of the Round Table.

Overthrow her father (failed).
Draw the Sword of Selection (abandoned).

Mordred Pendragon (in Japanese: モードレッド ・ ペンドラゴン, Modoreddo Pendoragon), also referred to as Saber of Red (in Japanese: 赤のセイバー, Aka no Seibā), is a major supporting character in the light novel, manga and anime series Fate/Apocrypha. She also serves as one of the servants of Ritsuka Fujimaru in Fate/Grand Order.

Saber of Red was voiced by Miyuki Sawashiro in the Japanese version of the anime and by Erica Lindbeck in the English version.

As a homunculus clone of Artoria Pendragon, Mordred looked identical to her father. Like her father, Mordred had a dainty figure with small breasts which allowed her to pass herself off as a boy. According to Kairi Sisigou her face was fairly androgynous, as he could've mistaken her as a boy during their first meeting.

Mordred had light green eyes and blond hair that she tied into a ponytail. Furthermore she had a pair of yaebas which are considered a sign of natural beauty in Japan.

In an attempt to mask her petite figure, Mordred wore a suit of bulky armor covered in red decorations and markings. The armor came with a retractable horned helmet that doubled as a Noble Phantasm. This Noble Phantasm known as the Secret of Pedigree completely masked details about Mordred when she was wearing it.

Sisigou bought Mordred modern clothes so she could materialize while outside of combat. Her modern outfit consisted of black boots, short jean shorts, a tube top that exposed her abdomen, and a crimson leather jacket.

Mordred was incredibly arrogant, believing herself to be equal or even greater then her father, a concept that was entirely untrue. She believed the only reason Artoria rejected her as her child and heir was because she was the offspring of Morgan la Fey, not realizing the reason she was refused was because she wasn't worthy of the throne.

Her only wish for the Holy Grail was the opportunity to pull the Sword of Selection from the stone as her father had before her in an attempt to prove herself worthy of kingship.

Although she seemed to have no issue wearing revealing clothes, the reason her armor was so bulky was to hide her small frame. Mordred abhorred the topic of her gender being brought up, going as far as to threaten her master's life when he referred to her as a woman.

Due to all the grief she was subjected to in life, Mordred harbored a powerful rage in her small body that she didn't try to contain by any means. On the battlefield, Mordred would charge forward like a Berserker, reveling in the cruelty she inflicted. Her Noble Phantasm, Clarent Blood Arthur, projected her pure rage into power.

Character concept sheet of Mordred for the anime adaption of Fate/Apocrypha. 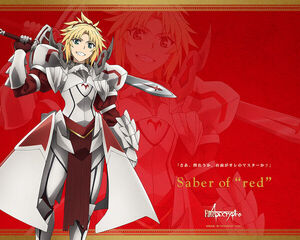 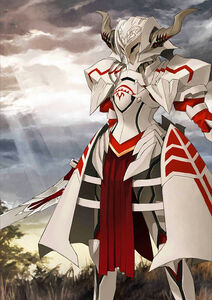 Mordred stage one in Fate/Grand Order, illustrated by Ototsugu Konoe. 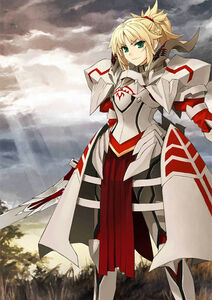 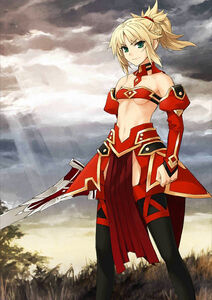 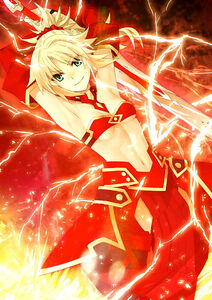 Mordred stage four in Fate/Grand Order, illustrated by Ototsugu Konoe.
Add a photo to this gallery

The Knight of Rebellion by Masaru Yokoyama

Retrieved from "https://hero.fandom.com/wiki/Mordred_Pendragon_(Fate)?oldid=2095213"
Community content is available under CC-BY-SA unless otherwise noted.