Redeem himself by killing walkers.
Find and reunite with Rick Grimes.
Kill the Saviors. (all succeeded)

He is also the current protagonist in Season 4 onward of the spin-off show, Fear the Walking Dead.

He is the husband of Jenny and father of Duane. While evacuating, Jenny was bitten and succumbed to the infection, causing Morgan and Duane to seek refuge in King County, Georgia, where the Grimes Family lived. After the loss of his son (who was bitten by Jenny), Morgan was living a life in denial, hoping to redeem himself by killing the invasive walkers. At the end of "No Sanctuary", it is revealed that Morgan has partly redeemed himself and is on a journey to find Terminus before Rick's altered sign turns him away until he stumbles upon Daryl Dixon and Aaron who bring Morgan to the Alexandria Safe-Zone where he is reunited with his long lost friend, Rick Grimes.

Fiercely protective, Morgan Jones barricaded himself and his son in a house in Rick's neighbourhood. Though his wife, Jenny, died, he decided to let her go outside instead of putting her down. Despite the dire conditions, Morgan still endeavoured to create normalcy for Duane; such as correcting his son's grammar, and engaging in mealtime prayers. But both remained haunted by the loss of Jenny, whom returns to the house regularly as a walker. Morgan and his son, Duane, first encountered Rick Grimes outside of his house in King County, Georgia. Duane knocked the unsuspecting survivor in the back of the head with a shovel, as he and his father assumed that he was another walker. When he heard Rick speak, Morgan realized that he wasn't and he brought Rick into their hideout.

Upon Rick's awakening, Morgan interrogated Rick upon the cause of his wounds, before the two's friendship could thoroughly take place. On learning that Rick had been in a coma, Morgan brought him up to speed on the current events as best as he could, introducing the previously confused Rick to the reality of the epidemic upon the country. He also told Rick that the government was gathering people in the major cities, giving Rick the idea to continue to Atlanta to try and find his family, Lori and Carl. Rick then thought of travelling to the King County Sheriff's Department, which Rick still had the keys for, to gather supplies.

Morgan drove him over and Rick provided the pair with weapons and other supplies in exchange for their kindness and help. He rejected Rick's offer to join him on his way to Atlanta, but tells Rick that he will join up with him in a few days; with the excuse that Duane can learn to shoot in the interim. Rick gives him a walkie-talkie, and tells him to radio him in when he approaches Atlanta so they can meet up.

On returning to the house, Morgan tells Duane to read his comic books before heading upstairs. He goes through the photo albums Jenny brought with them, selects a picture of her and sticks it to the window frame. He aims his rifle, and after shooting a couple of zombies to lure his wife out, he trains his gun on his undead wife; yet cannot bring himself to kill her. He attempts several more times, yet each failed in kind. Morgan and Duane's whereabouts are unknown for the rest of the season.

During the time Morgan has been absent from the series, he and Duane lived around King County the whole year. One day, while clearing a store, Duane was bitten by his own undead mother, and Morgan is finally forced to shoot her. After Duane's death, Morgan started to lose his sanity, believing he has the mission to clear all the walkers from town. He started to set up traps and wrote down names of people he knew that turned that were put down by his own traps.

When Rick, Carl, and Michonne go on a run into King County, Morgan holds them at gunpoint from a roof. They have a shootout, and while trying to pursue Rick, Carl ultimately shoots Morgan in the chest. Rick pulls off Morgan's shirt, revealing that he had donned body armor. They drag his unconscious-self into his building, avoiding his traps, and lay him down on a bed. For safety measures, his hands are bound by Rick. While Rick is reading the strange writings on the wall, he discovers that Duane had reanimated, and decides to stay and wait for Morgan to wake up. While Michonne and Carl go on a run, Rick waits for him to wake up, but Morgan grabs a knife that was taped to the side of the bed. He attacks Rick, claiming that he is not familiar with anyone anymore. He stabs Rick in the upper-left chest. Rick knocks the weapon away, pointing his gun at Morgan's head, and Morgan pleads Rick to kill him.

Morgan is tied up again and, after patching himself up, Rick finally manages to make him remember that the two know each other. Morgan says that he tried to contact Rick every morning for several weeks, but he never answered the radio, before explaining what happened to Duane. He is offered to join the group at the prison, but he realizes that Rick is taking a lot of guns, meaning that they are preparing for a war. Morgan claims that Rick, Carl, and his people will die either by bullets or by walkers, and refuses to join them, not wanting to see anyone else die. While clearing out the walkers caught on his traps, Carl approaches Morgan and tells him that he is sorry for shooting him earlier. Morgan remarks to Carl, "Don't ever be sorry."

While leaving King County, Rick, Carl, and Michonne watch as Morgan prepares to burn the corpses of the walkers he captured.

Morgan is seen hiking to Terminus on the railroad tracks. He stops walking, and stares at the Terminus sign recently changed by Rick, before taking off his mask and beginning to follow cross-shaped markings left on trees by the people of Terminus.

Morgan is seen following the Terminus markings to the elementary school where the Terminus members had held Bob when they cannibalized his leg. Morgan comes across a walker pinned under debris and says "shhhh" before stabbing it in the side of the head with a knife. He then follows the markings to Father Gabriel's church where he walks inside and creates a makeshift shrine at the altar. Morgan then kneels and prays in the front of the shrine before laughing. He explores around the church and finds the map to Washington D.C. lying on the floor and picks it up, reading the message Abraham had left for Rick and realizes that his friend is still alive out there.

Morgan is seen sleeping inside of a car and fixing hot chocolate as a man approaches him and holds him at gunpoint, revealed to be a member of the Wolves who demands all of Morgan's stuff and plans to kill him also. As another member attempts to stab Morgan from behind, he dodges the man and attacks both men with his staff, asking them to stop before knocking them unconscious and placing them in the back of the car he was previously sleeping in and blowing the horn, checking to make sure there are no walkers nearby so the men are left in a safe area. When Daryl and Aaron become trapped inside of a van surrounded by walkers when they fell for a trap set by the Wolves, Morgan saves the two men. Aaron offers him to join them at Alexandria but he refuses, showing them the map he found of Washington D.C. with Rick's name on it. Morgan, realizing that Rick is at Alexandria, accompanies Daryl and Aaron where he witnesses Rick executing Pete. He says "Rick?" as the two stare at each other. 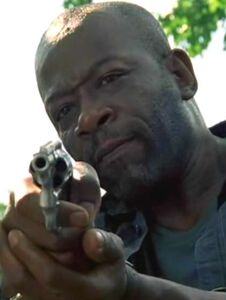 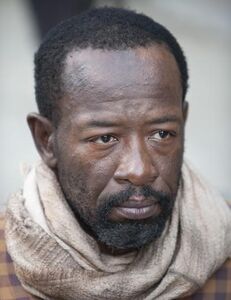 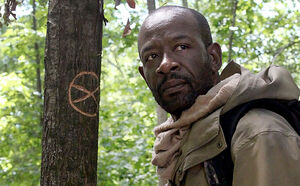