Control her spells around her boyfriend.

Redeemed Witch
Morgana Macawber is Darkwing's beautiful sorceress girlfriend. She was originally a criminal, but later reformed. Their attraction was nearly instantaneous from her very first appearance. Darkwing's love interest and a member of the Justice Ducks. Like any good or bad witch, she has familiars, including a spider named Archie, and two bats named Eek and Squeak. She has black hair and wears a red dress a la Bride of Frankenstein. She has earned Darkwing's trust, as she is one of only four characters that he has intentionally revealed his secret identity to. According to Flapping Terror's Intreview with Tad Stones, she and Darkwing were intended to get married and had children of their own; Tad even believed it would make for a good spin-off series. The name McCawber is a play on the words "macabre" and "macaw" (even though she seems to be a duck.)

She is voiced by Kath Soucie.

In this cliffhanger, Morgana is the deuteragonist. She becomes part of the Justice Ducks to battle the Fearsome Five.

Morgana's first appearance was in the episode "Fungus Amungus", the eighth episode in production order, which aired on ABC on Saturday, September 28, 1991. It's important to understand that while many sources list the first 13 ABC episodes of "Darkwing Duck" as a second season, it was produced with and aired alongside the 65 episodes that aired in syndication. Morgana next appeared in the two "Justice Ducks" episodes, which were the 44th and 45th episodes in production order. These aired in syndication on October 2 and 3 on 1991. While Morgana was portrayed on the wrong side of the law in "Fungus Amungus", in "Just Us, Justice Ducks", she's portayed as a hero and is clearly dating Darkwing. Her next appearance in order of airdate was "Ghoul of My Dreams" (the 38th episode in production order) which - despite what many sources claim - aired appropriately on October 31, 1991. Here, Morgana is still shown to be a criminal and appears to reform at the end of the episode. Thusly, it's obvious that "Ghoul of My Dreams" was intended to be her second appearance but thanks to haphazard syndicated schedules her arc from villain to hero was aired out of order. 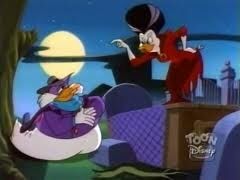 Darkwing Duck and Morgana in a heated argument on their date 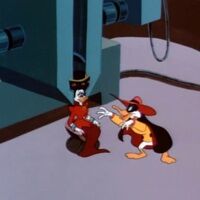 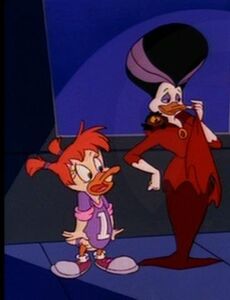 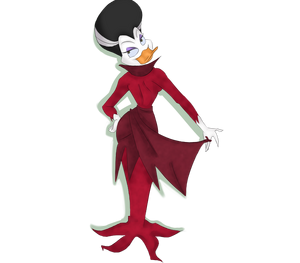 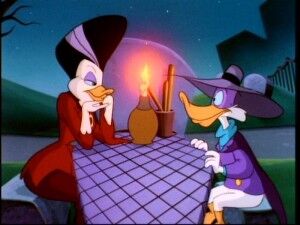 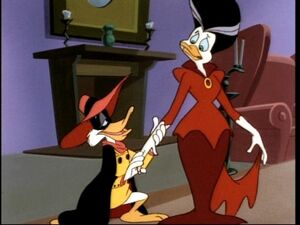 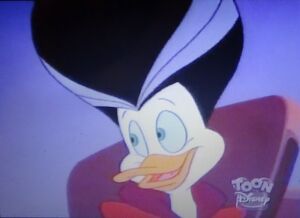 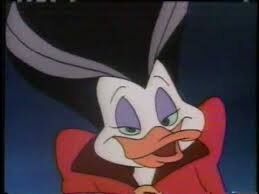 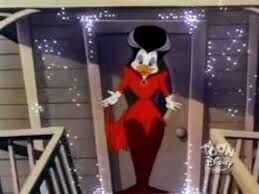 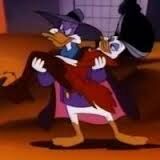 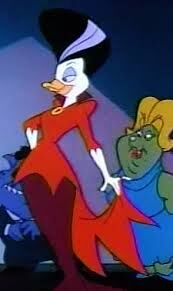 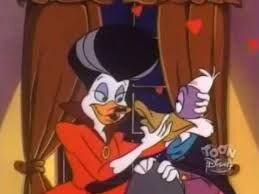 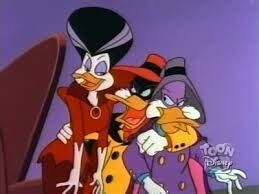 Retrieved from "https://hero.fandom.com/wiki/Morgana_Macawber?oldid=2159390"
Community content is available under CC-BY-SA unless otherwise noted.