Heroes Wiki
Register
Don't have an account?
Sign In
Advertisement
in: Female, Anti-Hero, In Love,
and 30 more

Cary of your family

Cary of your family

Morticia Addams is one of the main protagonists of ‎The Addams Family comic strips, TV shows and movies. She is Gomez Addams's wife and the mother of Pugsley Addams and Wednesday Addams.

She is played by Anjelica Huston in both live action films, the late Carolyn Jones in the TV series, and Darryl Hannah in Addams Family Reunion and is voiced by Charlize Theron in the 2019 animated movie who also played Jill Young in Disney's Mighty Joe Young. She will be played by Catherine Zeta-Jones in the upcoming series Wednesday. In the Broadway musical, she was originally portrayed by Bebe Neuwirth, followed Sara Gettelfinger in the US tour version and Samantha Womack in the UK tour version.

Her creator Charles Addams describes her as the real head of the family, being low-voiced, incisive and subtle, has stunning beauty, and has a fierce loyalty to her family. She has a garden full of deadly nightshade, henbane and dwarfs hair.

She easily allures her husband by speaking French, and is musically inclined, often playing a shamisen. She cuts the buds off of roses and discards them, keeping only the stems. She has a carnivorous plant she named Cleopatra, and enjoys feeding it. She also wants the her family to uphold the Addams Family traditions.

She is usually most taken aback when one of the clan goes astray and does something that we would consider normal/pleasant. She also smokes, not by using a cigarette or cigar, but instead smoke emanates from below her.

Morticia has pale skin and long black hair. She usually wears a long gothic dress to match her hair, tightly formed fitting, with a hobble skirt. According to Wednesday, she applies baking powder to her face instead of actual makeup. In the films, she has red lips and nails. Her face is illuminated by a ghostly glow around the eyes, which are most noticeable in dim light. 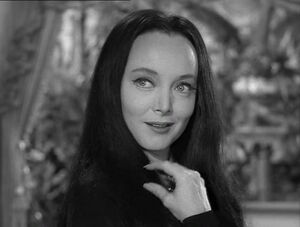 Morticia Addams in the 1964 TV Show 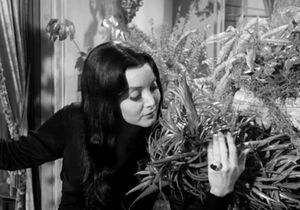 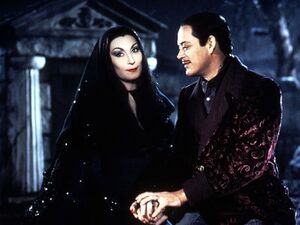 Gomez and Morticia in their family cemetery 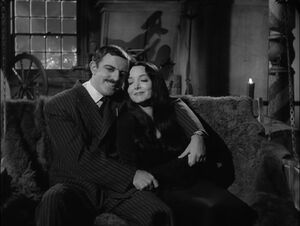 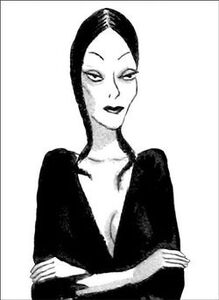 Morticia in the original comic 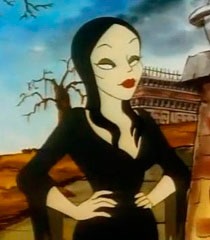 Morticia Addams in the 1992 cartoon series 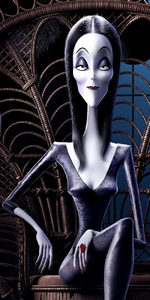 Morticia Addams in the 2019 animated film