Mosura
Queen of the Monsters

Mothra is a "kaiju", a type of fictional monster who first appeared in the serialized novel The Luminous Fairies and Mothra by Takehiko Fukunaga, Shinichiro Nakamura, and Yoshie Hotta. Since her film début in the 1961 film Mothra, she has appeared in several Toho tokusatsu films. She is a major character of the Godzilla series.

Generally regarded as female by English-speaking audiences, she is a giant lepidopteran with characteristics both of butterflies and of moths. She closely resembles an Inachis io, or a European Peacock Butterfly. The name "Mothra" is the suffixation of "-ra" (a common last syllable in kaiju names, viz. Hedo-ra, Ghido-ra, Ebi-ra, Goji-ra(Godzilla)) to "moth"; since the Japanese language does not have dental fricatives, it is approximated "Mosura" in Japanese. In the American dubbing of Mothra vs. Godzilla, Mothra is also referred to as: "The Thing". She is occasionally an ally to Godzilla but more often than not engaged in conflict with him due to his anger toward the human race. Mothra holds the most victories against the "King of Monsters."

Throughout her appearances, she is depicted as being a very kind and honorable creature, always fighting for justice and mankind's survival. She only fights back when attacked by humans and is shown to be protective of her friends, the Shobijin. She is selfless and willing to sacrifice herself for others. She also seems to care for Godzilla and Rodan and teamed up with them to defeat King Ghidorah.

In the Heisei era movie, Godzilla vs Mothra, she is willing to join forces with her brother Battra to defeat Godzilla, and expresses great sorrow when he dies, which shows that she has a very deep sibling bond, despite their clashing opinions of humanity.

As a larva, Mothra's sprays her opponents with silk as a ranged attack (to entrap or disorient an enemy). She also uses her mandibles for a close combat bite. (Mothra has a habit of biting opponents' tails, although it is rarely effective and, predictably, is usually self-defeating.) As an adult, her wings can (and generally do) create gales which tear apart buildings and send other kaiju flying. Her great bulk of a body is commonly used to her advantage in battle to slam into opponents (both in larva and adult form), and her surprising levels of strength can help her to drag and even lift monsters like Godzilla. Her final strategy is to emit "scales", a yellow poisonous powder that can hopefully asphyxiate an enemy. She only uses that attack when she knows she is going to die, though, because the extreme loss of scales will cause her to lose her flight.

The Heisei version of Mothra had some differences. She could now fire a beam of energy from her antennae, and fire arcs of lightning from her wings, or keep it in her body to release to another through touch. The powder now had a different effect; It would act as a 3-D mirror to trap energy blasts, making them rebound over whatever was inside the cloud of powder over and over again. This proved very effective in turning Godzilla's own atomic breath against him. Godzilla's Nuclear Pulse wasn't reflected by her mirror and she was thrown back, possibly because her mirror can't reflect energy attacks if it is able to pass around her mirror.

In the Mothra Trilogy, Mothra displayed a wide use of energy-projection abilities; ranging from triple prismatic beams from her forehead, to energized tackles, to her Sun Strike Buster, a very potent attack that comes from the sky like a sacred lightning bolt. Mothra Leo, her offspring and successor, shared her energy powers and also possessed the ability to gain alternate forms as a means of adapting to his opponent's fighting styles.

In GMK Mothra was able to shoot poison darts from her abdomen but she lacked both her hurricane force winds and her poison powder. In both Tokyo SOS and Final Wars, Mothra's powder was able to redirect both energy and physical projectiles back to their original senders. 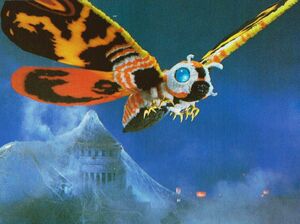 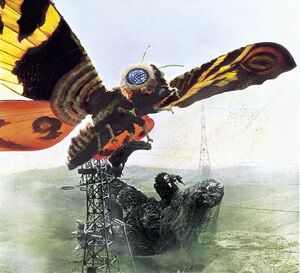 Mothra in her first battle with Godzilla 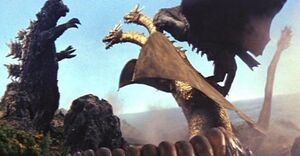 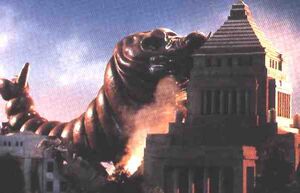 Mothra Larva in Godzilla vs. Mothra 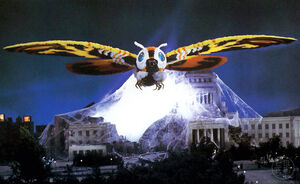 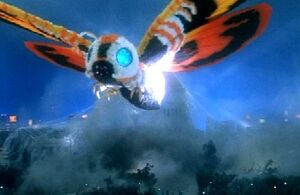 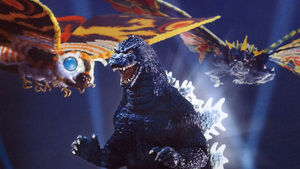 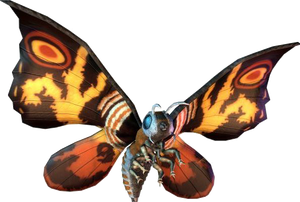 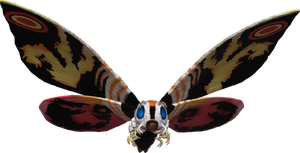 Mothra in Godzilla: The Game 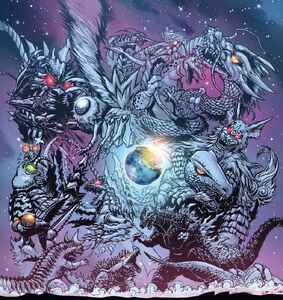