Save the world (succeeded), Assist Godzilla

Mothra Leo is the son of Mothra and the main protagonist in the Rebirth of Mothra trilogy.

In Rebirth of Mothra, Leo hatched out from an egg prematurely during a battle between his mother and a space monster called Desghidorah, and immediately set off to help her. After a long battle, the two managed to escape, though by that point, Mothra had been badly wounded, and she collapsed into the sea. Despite his best attempts to help her stay afloat, Leo could do nothing as he watched his mother die and sink into the depths of the ocean. Determined to avenge his mother, Leo cocooned himself against a 10,000 year old tree, and then hatched out as a fully grown. Afterwards he returns to fight Desghidorah, now transformed into his flying form, one more time, Leo emerges victorious, and seals Desghidorah away before returning to Infant Island.

In Rebirth of Mothra II, Leo returns to fight the monster, Dagahra, only to be put at a disadvantage when Dagahra was under the water and infected Leo with the Barem, but Ghogo used his power to revitalize Mothra Leo into Rainbow Mothra. Afterward, Rainbow Mothra transformed into Aqua Mothra so he could battle at equal terms with Dagahra. Aqua Mothra managed to destroy the beast, killing him once and for all.

In the Godzilla Island series, Mothra Leo is one of the island's residents. Like Rebirth of Mothra, he starts off as a larva before metamorphosing into a moth. When Mothra died in the series, Leo has taken over her role as an ally for Godzilla on multiple occasions. 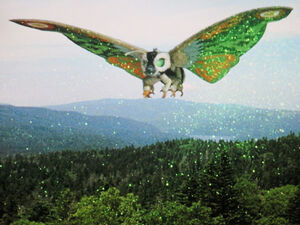 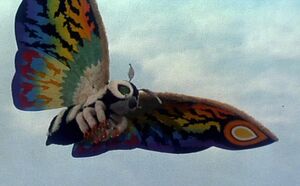 Retrieved from "https://hero.fandom.com/wiki/Mothra_Leo?oldid=1724598"
Community content is available under CC-BY-SA unless otherwise noted.