Hanging out with Touma and Aogami, Teasing Kaori Kanzaki

Motoharu Tsuchimikado is a supporting protagonist in the light novel and anime series A Certain Magical Index. He is Touma Kamijou's next-door neighbour and a student of A Certain High School's Class 1-7 alongside Touma and Pierce Aogami. The three of them are called the Three Idiots—Delta Force.

Initially referred to off-handedly as Touma's other classmate and neighbour (though in the anime is shown earlier as a recurring side character), he is later properly introduced during the Angel Fall Arc, as a spy for several organizations, most prominently Academy City and Necessarius, and as the first known Magician-Esper hybrid. After the Invasion of Academy City, he becomes a member of GROUP, which he joins to ensure the safety of his beloved stepsister Maika.

He is voiced by Anri Katsu in the Japanese version of the anime and Newton Pittman in the English version.

He has blonde hair and is always seen with sunglasses and a gold chain around his neck. He wears shorts and only a green shirt with white floral patterns, reminiscent of stereotypical Hawaiian shirts, when not in his school. However, he wears the shirt along with his winter uniform. His appearance is due to the fact that he wants to be popular with girls, however, because of this he is mistaken as a delinquent. He is very well toned and muscular for his age. He is 180 cm tall, making him nearly half-a-foot taller than Touma.

As the meaning of his magic name indicates, he is a trickster and liar by his own admission, willing to betray anyone if it helps him. Maybe it's because of this attribute that he has survived being a agent of multiple various factions.

He takes his job seriously, and is willing to abandon being a magician by becoming an esper for the sake of the Church. He works behind the scenes to keep the balance of the two sides, and takes it hard when he fails, subtly telling Touma that the conflict with the Roman Catholic Church and Academy City started not because of Touma but because someone (Motoharu) behind the scenes didn't do their jobs.

Regardless of being a serious magician and a spy, Motoharu enjoys being a high school student. He is on good terms with Kamijou Touma and his classmates, and gets into various shenanigans with them.

However, he shows he has a caring side, and that is with regards to his step-sister, Tsuchimikado Maika, which he dotes on and loves. She is the reason why he is referred to as the Siscon Sergeant due to his behaviour with his step-sister. It had been shown that he easily gets jealous when Touma and Aogami Pierce were referred by Maika as Onii-chan.

Maika is also the reason why he has stayed loyal to Academy City and puts his life in danger for, it so he can protect the world Maika lives in.

Motoharu is an Esper-Magician Hybrid and has abilities of from both sides. Infortunately, he can get severly injured and his body gets damaged as a result of using magic despite being an esper. 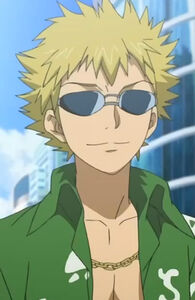 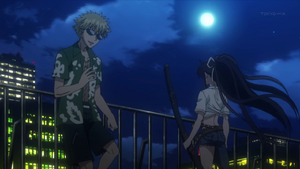 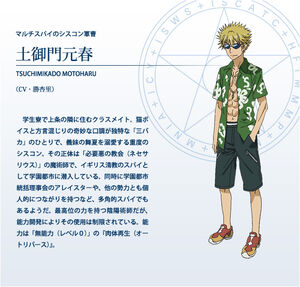 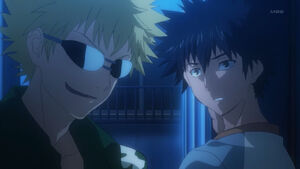 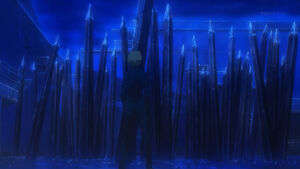 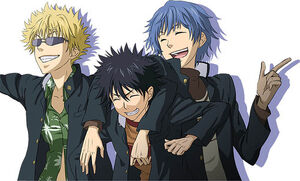 Motoharu with Touma and Aogami
Community content is available under CC-BY-SA unless otherwise noted.