Ghost in the Shell

Major and field leader of Section 9

Motoko Kusanagi. often addressed simply as The Major, is the main protagonist of the Ghost in the Shell franchise. She is the head of the assault team of the Japanese task force titled Section 9, which patrols for and works against acts of cyber-terrorism. Her body is entirely synthetic, with the only thing that makes her human being her soul, or 'ghost'.

At around age six, Motoko needed to convert into a full prosthetic body with only her brain and part of her spinal cord remaining organic, the rest of her body was entirely artificial and she spent years getting accustomed to using it, upgrading from one model to another as she aged. Motoko became a gifted hacker and was eventually recruited into the police force Public Security 9, an anti-cyber terrorism task force. In conjunction with her need to become cybernetically savvy due to her fully prosthetic body at a young age and her interest in cyber-brain technology Kusanagi was further trained in high-end technology for the task-force and is one of the nation's most brilliant hackers and certainly the most brilliant one on government pay roll in Japan.

Kusanagi is the Major of Section 9, second-in-command to Chief Daisuke Aramaki, the official overseer of the entire project. Aramaki rarely gives orders directly, instead trusting the Major with most local oversight and at her own request field-work. The Major is talented enough to hack even active cyber-brains and uses her skill to directly access the memories of suspects, information from prisoners and on occasion even hijacks the bodies of criminals to undermine their own group's crimes. Her current prosthetic body is highly modified from it's original model settings to be more useful for covert espionage and with Kusanagi's highly sophisticated, yet completely biological, brain at the helm she is essentially hack proof.

Kusanagi is a somewhat tall, thin young woman with blue-purple hair and red-violet eyes (though in the original movie, these was changed to black and blue-grey respectively). When on the job, her two main outfits are her JGSDF khaki military uniform and form fitting combat suit.

For the most part Kusanagi is a no nonsense cop. Technically all field work such as spying, breaking and entering and the purchase of black market goods are illegal but all such activities are expected of Section 9 and covered up due to an understanding with the Prime Ministry. Also though Kusanagi may occasionally circumvent normal police procedure to spare those that might normally become victimised by the system by in large, she is dedicated to her job and safe guarding the public, and so is more than willing to make sacrifices if she deems it necessary.

A defining trait of Kusanagi's is her unrelenting fearlessness. It is shown very frequently that she is overconfident to the point of being suicidally brave and feels no fear in situations where ever her hardened comrades are inclined to back down. There are many occasions in the franchise where Batou will tell her not to "do anything stupid" and she proceeds to do it anyway. Part of this is some definitely justified self-confidence, given she can demonstrably outperform almost any member of her highly skilled team in any given area, and is more resourceful than all of them combined, She is also very stoic and seems to be fazed by almost nothing; Batou even notes this once, asking if there's anything she's afraid of. Ultimately, however, Kusanagi is still very much human and can be taken by surprise and overwhelmed.

Despite her seemingly cold attitude, Kusanagi is far from heartless. She considers her fellow officers not just partners but friends and is good friends with Batou and Chief Aramaki in particular. She despises anyone who harms children, since she was fatally wounded as a child herself and was only saved by her cybernetic upgrades. 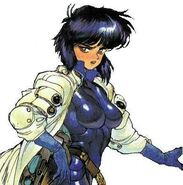 Add a photo to this gallery
Retrieved from "https://hero.fandom.com/wiki/Motoko_Kusanagi?oldid=1911231"
Community content is available under CC-BY-SA unless otherwise noted.