Gigantification (Able to change her size to giant form)

Yu Takeyama, also known by her hero name, Mineyama Hero: Mount Lady, or simply Mt. Lady, is a major/supporting character from the anime and manga series My Hero Academia. She is a veteran Pro Heroine that has long since graduated from the titular superhero academy. She is currently No. 23 in the Hero Billboard Chart JP and also a member of a team Kamui Woods and Edgeshot formed, which is named "The Lurkers".

She is voiced by Kaori Nazuka in the Japanese dub of the anime, who also voiced other characters besides Toru Hagakure, such as Tsubaki Nakatsukasa from Soul Eater, Kiyoko Shimizu from Haikyu!!!, Maria Ross from Fullmetal Alchemist: Brotherhood, Tsukasa Ayatsuji from Amagami SS, Lala-Ru from Now and Then, Here and There, and Nunnally vi Britannia from Code Geass. and by Jamie Marchi in the English dub of the anime who also voiced Rias Gremory from High School DXD, Ristarte from Cautious Hero: The Hero is Overpowered but Overly Cautious, Mukuro Ikusaba from DanganRonpa, Quetzalcoatl from Miss Kobayashi's Dragon Maid, Rinka Hayami from Assassination Classroom, and Cana Alberona from Fairy Tail.

Mt. Lady made her debut when Kamui Woods was about to restrain the Giant Villain before she intervene and defeats the villain with her Canyon Cannon, therefore stole his lightning. She then introduced herself in front of the crowd, gaining their attention as the paparazzi arrived, shamelessly taking credit while Kamui was in despair.

Later on when Katsuki Bakugo was taken hostage during the Sludge Villain Incident, She wasn't able to do anything due to the fact there was no space in the alley for her giant form to take action, being careful not to damage the entire area. When All Might arrived and defeats the Sludge Villain with a Detroit Smash, Mt. Lady protected the civilians with her arms when the impact and wind pressure caused during the fight. Later on she helped the rest of the Pro Heroes to gather what little remains of the Sludge Villain.

During the U.S.J. Arc, She alongside Kamui Woods were having trouble fighting against Habit Headgear who was holding a family hostage until All Might shows up and defeats him. She and Kamui were thankful of All Might coming to their assistance but complained that their hero work will be put down by him.

During the Sports Festival Arc, Mt. Lady is later seen with Kamui Woods and Death Arms, the three of them were assigned to patrol during the festival as security guards, commenting about how the festival is going to be this year while eating Takoyaki. She is later seen discussing with them about both the festival's current competition and the hero business. While discussing throughout the conversation, she apologizes for stealing Kamui Woods' thunder during her debut but soon changes the subject of asking Death Arms to quit smoking. During the surveillance duties she took, she watched Denki's fight with Ibara, she was that impressed that she would want Ibara for a sidekick before Kamui tells her to get back to work.

During the Vs. The Hero Killer Arc, She began her mentorship of teaching Minoru Mineta. But on the contrary, instead of teaching Mineta anything related to heroics, she ended up making him her servant of doing her chores while she lazed off reading magazines and eating chips. After the mentorship, she left Mineta traumatized during the experience of working with her, but it is unknown what she did to him.

During the Final Exam Arc, She appeared alongside Midnight for an interview on TV that night. But during the interview she would mock Midnight for her past days as a Pro Hero, insulting about how she "enjoys" the attention and how a woman like her "ages", this resulted into them arguing and fighting on television which soon became a pleasuring desire to Mineta's viewing.

During the Hideout Raid Arc, She and Kamui Woods join some of the Pro Heroes and the Police in their mission to rescue Bakugo from the League of Villains. She was seen at the League's warehouse as she destroys it, then sooner she, alongside Kamui, Best Jeanist, and Gang Orca would later restrain all the Nomu while Tiger rescues Ragdoll, found her unconscious and resulted in becoming quirkless. As All for One appeared before them, Best Jeanist attempts to restrain him but backfired as he attacks at full blast, sending both Lady and the rest flying out of mid air and gain injury. But as soon when Mr. Compress attempts to stop Izuku and the rest escaping with Bakugo, Lady makes a selfless act of protecting them as she uses Titan Cliff to block Compress' attack, resulting in being harmed more and went unconscious, later Kamui Woods helps her and the rest escape the scene, where Kamui mentioned he was proud of her doing well during the operation.

During the Remedial Course Arc, She didn't appear but it was mentioned by Denki that Mt. Lady formed a team with Kamui Woods and Edgeshot called "The Lurkers" ever since the Kamino Raid.

During the Pro Hero Arc at the event of the Hero Billboard Chart JP, she was seen being interviewed by the media about her membership and cooperation with the Lurkers, when the reporter mentions about some rumors of Lady and Kamui dating she declines her answers by mentioning "no comment", but then starts to complain about Kamui Woods getting more recognition than her when she was placed No. 23 in the charts.

During the Endeavor Agency Arc, She appears later on teaching Class 1-A about interacting with the media, using their moves from their quirks to be used to warn villains about their next moves, especially towards of bringing hope to heroes and civillians alike. She was impressed by their skills (especially Todoroki), however, Midoriya was an exception when he was too nervous to do anything, but when she mentions about his power compared to All Might, he begins talking about the fact widely, much to her uncomfort. Sooner she along with the rest of the Lurkers mentored Denki, Hanta, Ibara, and Mineta for their field training when the Hero Public Safety Commission demanded all schools to get their student heroes to begin the said event (probably due to the upcoming war).

Mt. Lady is described to be a very beautiful woman with a twist of vanity and shamelessness at nature. She's only in the Hero Business for the fame and attention, which is one of the reasons why she stole Kamui Woods' thunder of defeating the Giant Villain, instead of having any intentions of making the world a better world. She is also very persistent when it comes to using her sex appeal to gain popularity and fanservice, even said same to comparisons of beauty and age to other beautiful and hotter heroines such as Midnight for example.

However, despite her vanity, Lady is very selfless, careful, and serious about her job of being a hero, even when she is in her giant form, she is afraid of causing damage towards the city and tries cautiously to prevent any casualities from her said form, meaning there is so much more to Mt. Lady's character than just her desire for popularity and recognition, therefore she is not that entirely selfish.

She can also have a very lecherous and lustful side when she thought her affection on Todoroki, seeing him as handsome and interesting, which shares a similarity to one of Midnight's personality, but not entirely.

But deep down inside, she enjoys being a giantess, getting a thrill from being giant-sized or growing to giant size. However, She also enjoys the popularity and attention that comes with being a famous superheroine whom is rising from the ranks. Despite this, she has a noble heart and is always willing to fight against injustice and crime.

Yu's appearance is viewed to be a very, very beautiful and voluptuous woman at a young adult age, has a set of purplish-pink eyes with pupils that are colored white and eyelashes so elegant. She has very long hair, colored blone and the size of it reaches down to her hips' area alongside two shorter, curlier strands around her face's frame.

Her costume seems to be a skintight bodysuit, with the set colors being purple and pale around the body's area alongside with orange stripes between her gloves and leggings' cuffs, she also wears a domino mask with horns around it.

In her attire as a civilian, she her entire face is seen wtihout her mask and wears a plain shirt, winter jacket, tight jeans, and high heels.

They first met when she stole his chance of defeating the giant villain he was fighting then mercilessly stole his lighting, gaining credit during her debut but also his, but sooner or later they started becoming partners. They were also seen working together into fighting Habit Headgear.

Later on during the Sports Festival, they both participated for security around the campus alongside Death Arms, however, Kamui shows annoyance to Yu's prideful gain when it comes to free stuff, such as getting takoyaki for free by seducing the worker. While their discussion about the next round of the Festival, Kamui gets annoyed with Yu's apology about stealing his credit, but due to the tone it said sarcastic. Later on Yu teases him about how his quirk nearl resembles Ibara Shiozaki's after watching her peformance, but with Yu planning for which student she would choose for the internships, Kamui once again is annoyed and tells her to get on back with working on patrol.

During the Hideout Raid, when Kamui saves the other Pro Heroes, even Yu, he tells her she did well while she is unconscious, this proves that he now shows respect and care for her.

Later on it was mentioned that she and Kamui formed a team alongside Edgeshot, called The Lurkers.

During the event of the Hero Billboard Chart JP, the press interviews Yu about her relationship with Kamui, saying working with him gave her encouragement. It was said that there were rumors about them dating, when she was asked about it she declines immediately, this could be implied that deep down Yu has romantic feelings for him, despite having to complain about him getting more recognition than her.

Yu was not definitely in good terms with Midnight, thinking her opinion on Midnight's reason to become a hero was when she mentioned "I think you just like the attention", which led into an arguement between the two but got worse when they compared their own ages towards one another, resulted in fighting during their interview on live television.

But later on during the Endeavor Agency Arc, she and Midnight finally learned to at least cooperate with one another when she appears in U.A. as a guest to teach Class 1A into being more confident in front of the media. 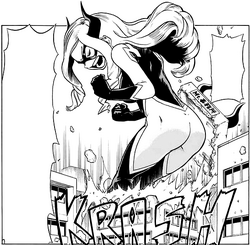 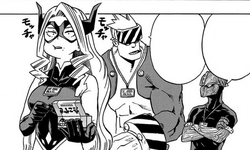 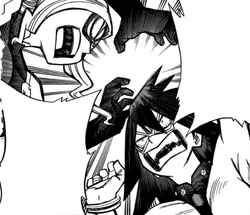 Mt. Lady and Midnight fighting in front of their interview 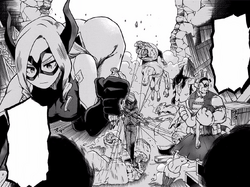 Mt. Lady and the rest restraining the Nomus
Add a photo to this gallery 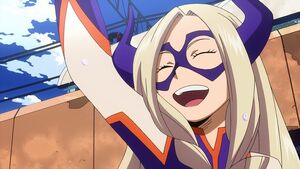 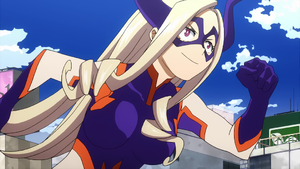 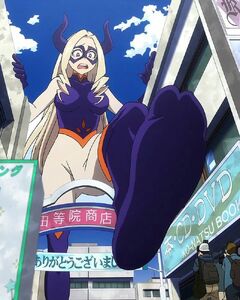 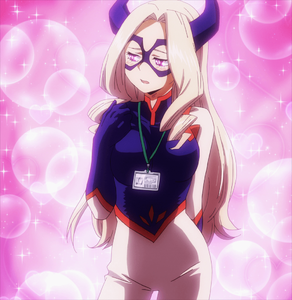 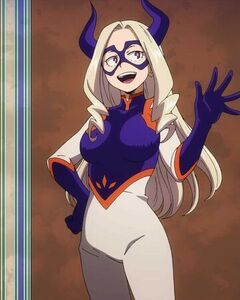 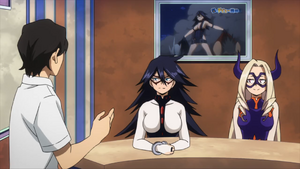 Mt. Lady and Midnight during the interview. 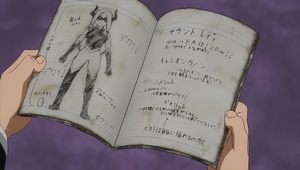 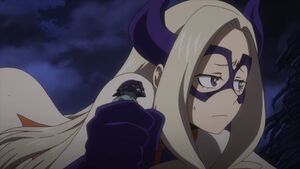 Mt. Lady being disappointed about her role 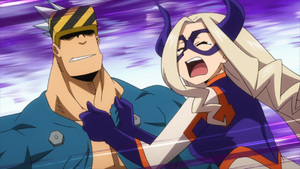 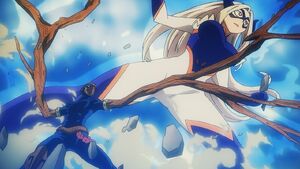 Mt. Lady and Kamui Woods in the Season 3 opening

Mt. Lady introducing herself in front of the crowd, marking her debut.

Mt. Lady performing Titan Cliff to save Izuku and the rest from Mr. Compress.

Mt. Lady declines the media's question about her and Kamui Woods' relationship.
Add a photo to this gallery 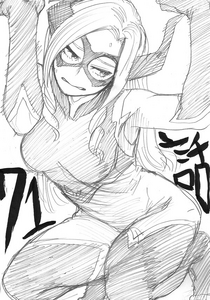 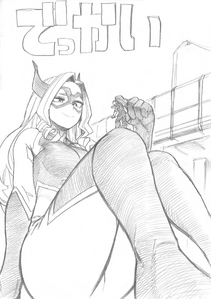 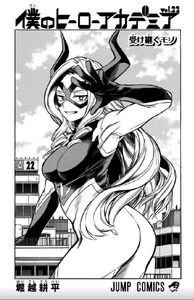 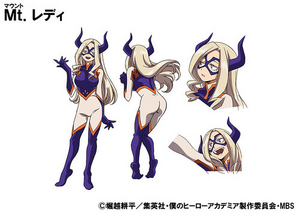 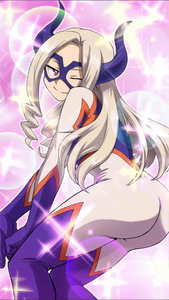 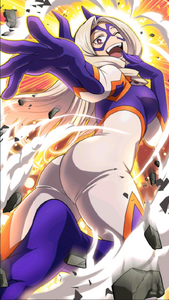 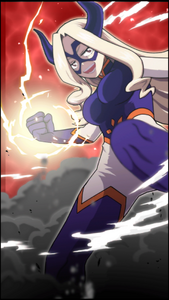 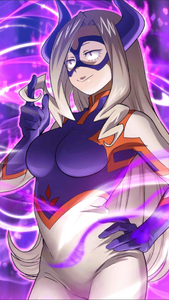 Retrieved from "https://hero.fandom.com/wiki/Mount_Lady?oldid=2021309"
Community content is available under CC-BY-SA unless otherwise noted.