This page is about the incarnation of Mowgli from the 2016 movie. The mainstream version can be found here: Mowgli (Disney).

Playing with Grey and the younger wolves.

Hanging out with Bagheera and Baloo.
Spending time with Hathi Jr.
Swinging among the jungle.

Return to the man village (formerly)

Mowgli is the main protagonist of the 2016 adaptation of The Jungle Book and its upcoming sequel. He is a young man-cub who lost his father at an early age to the tiger Shere Khan. Afterwards, he was found by Bagheera and adopted by a wolf pack.

He is played by newcomer child actor Neel Sethi.

As a child, Mowgli was orphaned when the wicked tiger Shere Khan murdered his father. Left without a family, he found himself under the care of the panther Bagheera, who turned him over to the wolves. The pack became his family.

Mowgli is first shown when running with some pups including his surrogate brother Gray. He climbs up some trees as he playfully chases them, but Bagheera stops him, telling him if he can't run with the pack, he'll wind up as predator food. Feeling like a failure, Mowgli tries to fit in the pack.

One day, during the dry season, Mowgli and the wolves go down to a lake by the Truce Rock to drink water, but the Man-cub is forbidden to use his human tricks. Just then, Shere Khan arrives and, sensing Mowgli, tells the wolves that man is forbidden. He vows to find the boy and kill him, since he fears their guns and fire when the truce is over.

Sure enough, the rain falls and the truce is broken. The wolves decide it is time for Mowgli to go to the Man-village. Raksha, the wolf mother, lets Mowgli go, but not before telling him he will always be her son.

Mowgli is reluctant to go the the Man-village. While walking through a herd of buffalo, Bagheera tries to tell him he is in danger. Mowgli doesn't believe him, but Shere Khan attacks. The boy jumps over a ravine and hitches a ride on buffalo to safety. Meanwhile, baiting the wolves with a false truce, Shere Khan kills Akela and takes over the pack.

Mowgli finds himself lost in the jungle. He picks some fruit to eat and offers one to a mongoose, but several others swipe his snack. Mowgli chases them and runs into Kaa, the snake, who reveals the truth about the Man-cub's past and is about to swallow him when Baloo, a bear, overpowers her and saves Mowgli.

Baloo convinces Mowgli to help him fetch honey for hibernation. The two of them help each other and Baloo reluctantly promises the boy he'll take him to the Man-village by Winter. The two of them become friends, and the bear praises Mowgli's "tricks," like creating a honey stack and saving a baby elephant from a pit.

Bagheera convinces Baloo to take Mowgli to the Man-village and, in a bid to do the right thing, the bear tells Mowgli he doesn't want him around anymore. His feelings hurt, Mowgli goes up into a tree, where a gang of monkeys, the Bandar-log, kidnap him and take him to their temple. He is brought before their monarch, King Louie, who convinces Mowgli to stay with him, as long as he gives him the the "Red Flower," or fire. Baloo and Bagheera arrive to help Mowgli. While Baloo distracts the Bandar-log, Bagheera leads Mowgli away. Suddenly, one of King Louie's thugs sounds an alarm and the huge ape chases the Man-cub while his henchmen attack Baloo and Bagheera, who fight them off. King Louie reveals to Mowgli that Shere Khan murdered Akela. The boy doesn't believe him and escapes while the temple collapses on the ape king.

After a narrow escape, Baloo and Bagheera unveil that indeed, Akela had been killed. Mowgli knows he must avenge his father's death and grabs up a torch. As he runs through the jungle, sparks land on the grass, setting the jungle on fire. Mowgli challenges Shere Khan to a fight and the evil tiger emerges, ready to attack the boy. Mowgli prepares to burn Shere Khan with the red flower, but tosses the torch into the water and rallies the animals. Enraged, the tiger lunges and Baloo fights him off. Encouraged by Bagheera, Mowgli runs into the jungle, with Shere Khan in hot pursuit. He lures him into a dead tree, where Shere Khan prepares to finish him off. Mowgli jumps to safety on a swing. But as soon as Shere Khan lands on a branch, it snaps under his weight, causing the villain to plunge to his death. Aided by the elephants and animals, Mowgli builds a dam and water douses the fire, putting an end to Shere Khan's reign of terror once and for all.

In the end, Mowgli stays in the jungle and lives alongside the animals, his new family. 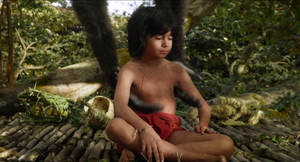 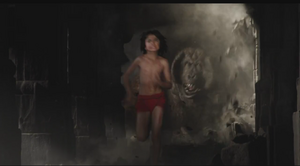 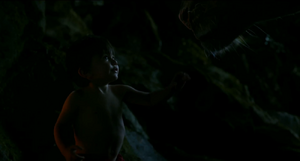 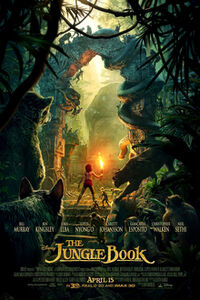 Mowgli on the film's poster. 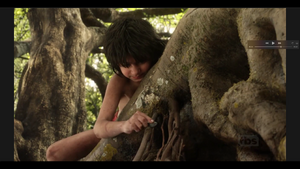