Find a human to love her.

A Curious Friendly and Brave Doll

She is voiced by Kelly Clarkson and in the Latin dub by Tini Stoessel, who also portrayed Violetta Castillo in both Violetta and Tini: The New Life of Violetta, and herself in Soy Luna.

Moxy is a felt-covered pink doll that’s naked with black eyes and eyelashes. She has seven teeth (3 on top, 4 on bottom) and a glob of hair on her head. She also has two rounded curls, 4 fingers on each hand, making 8 fingers on 2 hands, and shoe like feet, kinda like a build-a-bear toy.

Moxy is the leader of the group. She has an insatiable curiosity, limitless confidence, and the unique ability to make others feel great about exactly who they are, but she's also looking for something more. Likewise, she is a determined optimist who is up to all the challenges she has to face to get to "the big world".

Tricking lucky bat into going into the tube via tea leaves, then, asking her friends to go into the tube with her. All of her friends excluding Ox (busy) go with her, Wage was about to not go, but had to anyway.

Falling from a tube, and sliding down a slide, they make it to doll type 12 (human dolls) with a song similar to today’s the day. Then, gets bullied by Lou, but thanks to her kindness, she is allowed to stay at the place, with Mandy. Finding out Mandy is imperfect.

For Moxy, training was bad. Although doing great at her parkour skills, she gets marked purposefully by Lou, so Lou can put her in the washing machine. Then, back to Mandy’s house to get perfected up, She gets called a reject, even with the change.

All dolls (or one doll said people) were depressed and so as Moxy. Soon, Mandy told Moxy that she was right, she can go to the big world, she has to overcome Lou. Mandy and Moxy sing a song on mirrors in space about being different...

After the song, she gets kidnapped by the spy girls, and putted into the trash. Luckily, Moxy’s hair helped her get out, she also did a motivational speech.

The next day was the gauntlet. Moxy made everyone win by hugging the baby after being kicked in the nose. Revealing that a doll’s true purpose is love. Lou got mad and destroyed the portal...

She and Mandy fixed the portal by the power of song and then merged into imperfection...

after all that (spoilers!) she got chosen, and her owner was similar by the teeth! 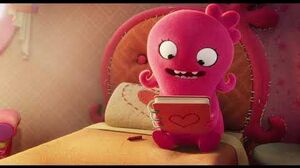 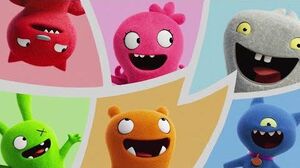 UglyDolls Songs - Couldn't be better & Today is the day