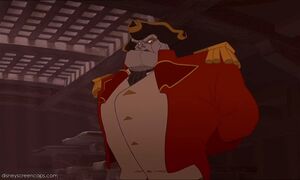 Mr. Arrow is a supporting protagonist from Treasure Planet. He is a humanoid with rocky figures, being extremely affectionate and loyal to Captain Amelia. When the ship was captured in a stellar explosion he fell overboard and had his safety line cut out by the evil pirate named Scroop, being sucked into the black hole. His death was later mourned by the crew, which believed it was caused by Jim Hawkins's incompetence regarding the safety lines of which he was in charge.

Retrieved from "https://hero.fandom.com/wiki/Mr._Arrow?oldid=1847496"
Community content is available under CC-BY-SA unless otherwise noted.