The Bulldog from Hell
Beefy

To help his owner Little Nicky to rescue Satan from Cassius and Hadrien's bad plan (succeeded).

Hadrien
Anyone who hurts Little Nicky or Satan

Scapegoat Animal
Mr. Beefy is a Bulldog from Hell and the deuteragonist from the fantasy comedy movie Little Nicky. He is an close friend of Satan and Little Nicky's pet dog and sidekick.

He is voiced by Robert Smigel.

His appearence is an Bulldog with spiked necklace. He has the ability to speak in a human language.

Mr. Beefy is hired by Satan to be Little Nicky's pet dog. He is a nice dog who talks like an human being. Mr. Beefy teaches his owner Little Nicky how to eat correctly the fried chicken by giving him positive things that is interesting. He accompanes Little Nicky to stop Little Nicky's two evil brothers from creating a living hell on Earth. When Little Nicky plays Basketball, Mr. Beefy encourages him by saying "Woof! Woof!" like a dog. 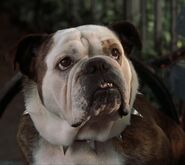 Add a photo to this gallery
Retrieved from "https://hero.fandom.com/wiki/Mr._Beefy?oldid=1711995"
Community content is available under CC-BY-SA unless otherwise noted.