The Egg of Destiny (formerly)

For E.B. to succeed him as Easter Bunny (suceeded)

Mr. Bunny is the son of unnamed rabbit, the father of E.B. and the former Easter Bunny and a main character of the 2011 film Hop.

He is voiced by Hugh Laurie, who also played Gregory House, Dr. Cockroach and Steve Claus.

Not much is known about Mr. Bunny's early life except that when he was a child, his father (the then Easter Bunny) showed him the Easter Factory.

Some years later, Mr. Bunny became the Easter Bunny after his father either died or retired.

Mr. Bunny first appears at the start of the film calling for his young son E.B., who is playing bongos on one of Easter Island's statues. After E.B. joins him, Mr. Bunny shows him around the Easter Factory, telling E.B. that one day it will all be his. At one point in the tour, E.B. is scolded by Mr. Bunny's second-in-command and the head Easter Chick Carlos for eating Marshmallow Chicks off the conver belt. Mr. Bunny comes to E.B.'s defence and tells Carlos that E.B. was just taste testing them. Whilst E.B. enjoys the taste of the Marshmallow Chicks, Mr. Bunny tastes them and tells Carlos that there is too much marsh and not enough mallow. When E.B. expresses concern that he won't be able to become Easter Bunny, Mr. Bunny assures him though it's a big responsiblity, he will be ready as in a few years time, he will have the Egg of Destiny (a magical staff used by the Easter Bunny) and be given the powers of the Easter Bunny. Following this, Mr. Bunny continues showing E.B. around the factory, whilst an annoyed Carlos looks on.

Mr. Bunny is then seen sometime later arriving in his Egg Sleigh with his rabbit helpers delivering candy to Fred O'Hare's house in Van Nuys California, unaware that Fred is watching.

Mr. Bunny is then seen 20 years later, on the night of passing the mantel of the Easter Bunny over to E.B.. He goes to E.B.'s room and finds him playing on his drum kit and questions him on why he isn't rehearsing his speech. But E.B. doesn't want to be the Easter Bunny and wants to be a drummer in a band instead, but Mr. Bunny tells him that 4000 years of tradition doesn't end just because one selfish bunny doesn't feel like doing it and also tells E.B. to get rid of the drums and get his priorities straight before leaving the room.

Afterwards, Mr. Bunny discovers that E.B. has ran away and feels guilty for what he said and sends out his royal guard The Pink Berets to go and find him. Carlos tries hinting to Mr. Bunny that he should be his successor, but Mr. Bunny fails to notice.

When the Pink Berets find what they think is E.B. (really it's a turkey) and bring Fred to The Easter Factory believing that he killed E.B. which saddens Mr. Bunny. Afterwards, Carlos turns against Mr. Bunny and takes over the factory and locks up the rabbit workers and traps the Pink Berets in chocolate. He then has the other chicks seize Mr. Bunny and take the Egg of Destiny off him. Then Mr. Bunny, along with Fred, is tied up in liquorice and slowly lowered into hot candy to be boiled alive.

Luckily E.B. arrives and battles Carlos (who has become a rabbit/chick hybrid due to exposure to the magic of The Egg of Destiny) whilst Fred frees himself and Mr. Bunny by eating the liquorice. After Carlos's defeat, Mr. Bunny and E.B. reconcile and Mr. Bunny makes E.B. and Fred Co-Easter Bunnies in order to balance the workload so E.B. can continue following his dreams to be a drummer. 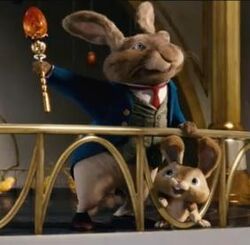 Mr. Bunny telling E.B. to get his priorities straight after E.B. says he would rather be a drummer than be The Easter Bunny.

Mr. Bunny with his second-in-command Carlos after E.B. runs away. 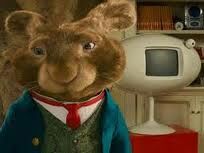 Mr. Bunny with Carlos, the Rabbit workers and Easter Chicks.

Mr. Bunny being attacked by the Easter Chicks after Carlos takes over Easter. 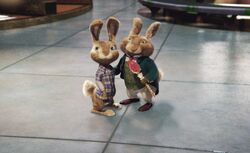