Mr. Game and Watch is the main character of the Game and Watch series of video games. He is also seen as a usable character in the Super Smash Bros. series of video games, first appearing in Melee. He is capable of using all sorts of items as weapons like a pump, a bell that he smacks enemies with, a giant key and more. He is never heard actually talking, and instead "speaks" in a series of sounds such as bleeps. He is also known for his notable Final Smash where he morphs into an octopus, and his tentacles trap enemies and hit them.

Mr. Game & Watch is unique in that his movements are individual frames like with a Game & Watch game. All of his "voice" clips (including screams, taunts, and other such noises) are also sounds heard during various Game & Watch titles. Mr. Game & Watch is one of the lightest characters in the game thanks to his flat appearance, heavier than only Pichu and tied with Jigglypuff, which makes him easier to KO, and his attacks, while powerful, are slow. However, his movement attributes including dash, walk, fall, fast-fall speeds, traction, and gravity are identical to Mario's.

All of Mr. Game & Watch's moves also reference the various Game & Watch units. His neutral special is Chef, which tosses food from a frying pan. His down special is Oil Panic, which absorbs projectiles in a bucket that can be dumped onto opponents to deal a combined damage total. His up special is Fire, which springs him into the air with a trampoline. His side special is Judge, which has Mr. Game & Watch swing a hammer, its effects based on the number he holds up. His standard attack is based on Greenhouse, and his dash attack has him wearing the helmet from Helmet. For his strong attacks, Mr. Game & Watch's forward strong attack is the chair from Lion, his down strong move has him flip a manhole cover from Manhole, and his up strong attack is the flag from Flagman. His neutral aerial is the parachute from Parachute, his forward aerial is a package from Mario Bros., his back aerial is a turtle from Turtle Bridge, his up aerial is based on Spitball Sparky, and his down aerial is a key from Donkey Kong Jr.. His side smash is the torch from Fire Attack, his up smash has him wearing the helmet from Octopus, and his down smash is the hammers from Vermin. All four of his grab animations have him juggling the character like in Ball. His taunt has him ring a bell, based on the alarm feature of Game & Watch units.

Mr. Game & Watch returns in Super Smash Bros. Brawl, as an unlockable character. He can be unlocked by playing 250 Brawl matches, clearing Target Smash!! with 30 characters on any difficulty, or having him join the party in The Subspace Emissary; with either of the former methods, he must be defeated on Flat Zone 2 to be unlocked. While he has been made heavier, he is still the second lightest character in the game (now only heavier than Jigglypuff and tied with Squirtle).

In terms of his moveset, his neutral aerial has been replaced with the fishbowl from Tropical Fish, as the parachute is now a part of his up special move. His Final Smash is Octopus, which transforms Mr. Game & Watch into the giant octopus from the Game & Watch unit Octopus.

In the Subspace Emissary from Super Smash Bros. Brawl, Mr. Game & Watch clones made from Shadow Bugs are in direct command of the Halberd. In addition, according to the Shadow Bugs' trophy information, his body produces Shadow Bugs — a substance that is used to form members of the Subspace Army, which can be endlessly extracted from him, and he doesn't even know it!. He doesn't revolt against the Subspace Army at first, as he is unaware of the concept of good and evil. After Meta Knight gets back the Halberd, he takes control. Snake knocks out all the Mr. Game & Watches out of an open window and into the Halberd's bridge, where they melt into Shadow Bugs that merge into Duon, except for the real one. Following the foe's defeat, a Mr. Game & Watch's trophy is left behind. This may mean that the false Mr. Game and Watches turned the real Mr. Game and Watch into a trophy, and one of the fakes stashed it within him. Fox McCloud attempts to shoot it but Princess Peach revives it and gives Mr. Game & Watch her Parasol. Mr. Game & Watch fiddles with it, then walks around with it in Game & Watch quartams, making Peach giggle. He then joins the party, helping the other characters throughout the game. It's also been confirmed by the game's official website that Mr. Game & Watch cannot tell from good nor bad.

Mr. Game & Watch is the only major character to not have a snapshot.

His inclusion in the game was briefly hinted at in Pac-Man's reveal trailer, where at the end of the video, the screen compares the debut years between him, Pac-Man, Mario and Donkey Kong. His debut year is technically incorrect, because Mr. Game & Watch did not exist as a character until Super Smash Bros. Melee, and his Super Smash Bros. Brawl trophy description considers his debut to be 2002's Game & Watch Gallery. Despite being hinted at in the trailer, he wasn't officially confirmed to be in the game until its release, and was not officially revealed until afterward.

Mr. Game & Watch's appearance has been altered a bit, which includes having a smaller nose, and more rounded hands, as well as being smaller in size. While his moveset is unchanged from Super Smash Bros. Brawl, there are minor differences in his looks when performing certain moves. He is also given a new down taunt in which he sits down and sighs, based on Mario Bros..

In terms of customizations, Mr. Game & Watch is the only fighter who can be equipped with the Torch, Watch Battery, and Microchip equipment.

Mr. Game & Watch, along with Mario, hosts the Gift Mode in the Gallery Corner. This is his only speaking role.

Mr. Game & Watch makes cameos on the menus of WarioWare: Twisted! and in the 'Games' icon in the character selection screen in WarioWare: Touched!. Several audiences in The Invent-Off stage cutscenes from WarioWare: Smooth Moves resemble Mr. Game & Watch people. He also appears in the microgames that are based on the Game & Watch games.

Mr. Game & Watch-like people appear in WarioWare, Inc.: Mega Party Game$! in the multiplayer game Survival Fever. They cheer for the players, and will say "1,2,3!" when a microgame is about to start. They will cheer more if the player(s) beat the microgame, but if they fail they will boo the player and some will leave.

In Donkey Kong Country Returns and its Nintendo 3DS remake, Mr. Game & Watch makes a cameo appearance in the background of Foggy Fumes. He is seen hammering a pipe.

In Super Mario Maker, there is an unlockable costume for Costume Mario that looks like Mr. Game & Watch. It is unlocked by scanning a Mr. Game & Watch amiibo or clearing 100 Mario Challenge on Expert setting. Pressing +Control Pad up will make Mr. Game & Watch take out his bell. He also takes out a parachute from Parachute after jumping. 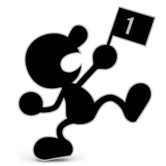 Mr. Game & Watch as he appears in Super Smash Bros. Ultimate.
Add a photo to this gallery

Retrieved from "https://hero.fandom.com/wiki/Mr._Game_and_Watch?oldid=1219386"
Community content is available under CC-BY-SA unless otherwise noted.