Mr. Grasshopper is a giant talking grasshopper and one of the many heroes who befriend James in the film James and the Giant Peach.

He is voiced by Simon Callow.

He was once an ordinary grasshopper before he and the other bugs were magically turned life size. He dresses and speaks like a highly sophisticated gentleman from the Edwardian era in the early 20th century, as he also wears a monocle. He is quite tall and can jump real high and fly. His long legs give him enhanced speed and strength.

The others often look to him for answers, but Centipede does not care for him, which leads to the two constantly arguing. He is skilled in playing the violin. He is like a grandfather figure to James.

He first appears when a transformed James comes inside their hiding place. When Centipede cuts the peach loose and it falls in the ocean, James thinks of capturing seagulls to use them to make the peach fly. Grasshopper shows an interest in what New York City offers and lends a helping hand throughout the journey. When they get attacked by a robot shark, its torpedoes break the strings supporting the seagulls, and Mr. Grasshopper takes James on his back and flies up to retrieve them. When a couple of torpedoes are fired at James and Grasshopper, Mrs. Ladybug flies up and whacks the torpedoes away with her pocketbook.

Later, when Centipede accidentally steers the peach off course to the North Pole, Grasshopper furiously confronts him about it and gets the other bugs to turn on him. When Centipede angrily challenges him, Grasshopper kicks him in the face, knocking him out and one of his tooth. He sarcastically points out that they need to determine their coordinates and use triangulation to get to New York. Unfortunately, he also points out that there's no hope since they don't have a compass. He later feels remorseful when Centipede jumps into the frozen lake, thinking he committed pesticide because of what he did to him. When Centipede returns with a compass, he and Grasshopper make up, and the two become good friends.

Before arriving to New York and to make up for what he did to Mr. Centipede earlier, Mr. Grasshopper relieves him of his post by bringing him a chair and blanket and plays the violin in solace, but James hears and was pleased to listen, after learning it was Grasshopper all along. They are later attacked by the Rhino, and he and the other bugs are separated from James during the attack, but later reunite with James, who had by then transformed back into his normal form. They also help get rid of James' cruel aunts, Spiker and Sponge. Miss Spider binds them in her string and Mr. Grasshopper spins them around with his feet, making the string cover them completely. After the kids ear the peach, the bugs make its core a home for them and James.

In the credits, a newspaper headline shows Mr. Grasshopper as a professional violinist, playing in concerts around the city. 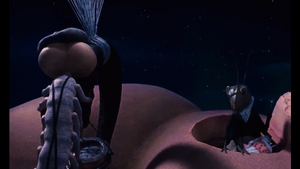 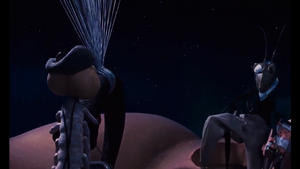 "Came to relieve you of your duties." 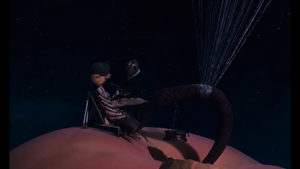 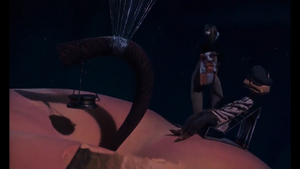 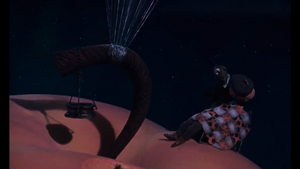 Here's a blanket to keep you warm, Mr. Centipede 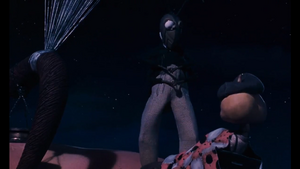 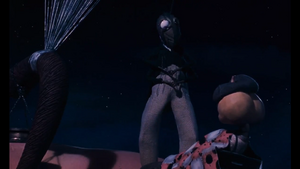