To satisfy his desires for the latest crazes.

Mr. J. Thaddeus Toad is the main protagonist from The Wind in the Willows, which made up the first half of The Adventures of Ichabod and Mr. Toad.

He is based on Mr. Toad from the novel The Wind in the Willows.

He was voiced by the late Eric Blore. And he was currently voiced by Jeff Bennett since 2001.

Toad is a true friend with his heart in the right place, but his good tendencies are often over-shadowed by his conceit and craze for the latest fads and manias, such as with caravans, motorcars, and airplanes.

In his featured segment, Toad is described as an "incurable adventurer" with an uncontrollable affinity for fads, such as mountain climbing, boating, and horsecart riding. At the beginning of the story, Toad's transportation manias have racked up a large amount of debt, so while he's out on his latest fad (riding around in a gypsy cart with Cyril Proudbottom, destroying property as they go), MacBadger is trying to sort out his finances. At Angus' request, Rat and Mole try to persuade Toad to give up his cart craze, but Thaddeus is adamant. Suddenly, his attention is stolen away by (to him) a vision of beauty: a motorcar. Seeing what Toad's newest craze may lead to, Rat and Mole lock him in his bedroom and guard him. However, Toad sneaks out that night and is arrested for presumably stealing a motorcar. In court, acting as his own defense, Toad calls Cyril to tesitfy about the events of that day. Cyril explains that Toad had met up with him after he escaped, and while they were walking, a red motorcar drove up to a tavern, instantly snatching Toad's impulses. After the car's driver and passengers (a group of shady weasels) entered the tavern, Toad decided to barter with them. However, he didn't have any money on him (MacBadger had cut off his funds), so he and the weasels (with Mr. Winkie the barman acting as a witness) drew up a contract designating a trade: Toad gave the deed to Toad Hall in exchange for the motorcar, which, unknown to him, had been stolen. The court is unbelieving that Toad would be foolish enough to do something like that, so he calls Winky as a decisive witness, emphasizing his supposed "unimpeachable honesty". However, Winky stabs him in the back by saying that Toad tried to sell him a stolen motorcar, so Thaddeus is sentenced to a lengthy stay in prison.

On Christmas Day, Toad, remorseful and emotionally shattered, makes a solemn promise to never let his impulses get the better of him. However, at that instant, Cyril, disguised as Toad's grandmother, comes into his cell with a disguise for him and a plan of escape. Disguised as an old woman, Toad escapes with the police hot on his trail, stealing a locomotive and then jumping off of it into the river (a foolish action, as his ball and chain kept him underwater for a long time). A weak and exhausted Toad makes his way to Rat's home, where he and Mole are about to have Christmas dinner. At first, Toad scoffs at the idea that he would be afraid of the police, but when someone forcefully knocks at the door, Toad's confidence evaporates and he pleads for Rat and Mole to hide him. However, feeling that Toad still owes a debt to society, Rat orders a reluctant Mole to open the door. The visitor is actually MacBadger, who reveals that the weasels have overtaken Toad Hall, and Winky is their ringleader. With amends made between Toad and his friends, they make a plan to sneak into Toad Hall and retrieve the deed to Toad Hall from Winky.

That night, using a secret passage, the four friends infiltrate Toad Hall while the weasels and Winky are in a drunken sleep. However, their positions are soon compromised, resulting in a chase and dangerous game of "keep away" between Toad, his friends, Winky, and the weasels. In the end, the friends escape, with Toad holding the deed. On New Year's Day, Rat, Mole, and MacBadger gather to celebrate the new year and also to the new, reformed Toad. Their jubilance is soon shattered, however, as they see that Toad has once again relapsed, this time into a craze for airplanes. As MacBadger faints, Toad and Cyril fly off to see the world in an old-fashioned airplane.

In the film, J. Thaddeus Toad (in a cartoon firefighter hat) can be briefly spotted driving past Eddie Valiant, then driving his cartoon fire truck while saying one of his quotes, "Tally-ho!" in front of the screen in a brief full screen view of him on the ladder and holding the steering wheel of the truck.

Toad makes appearances as a recurring guest at the House of Mouse. Sometimes, he'll been seen driving wildly in his motorcar. 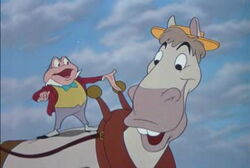 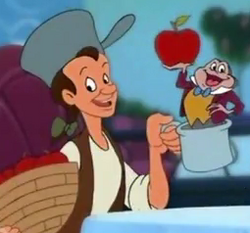 Mr. Toad in House of Mouse 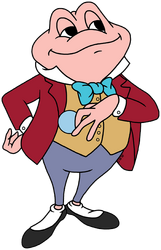