Mr. Jolly is the tritagonist of the Disney animated TV show, Teacher's Pet. He is the family cat and watches a lot of soap operas. He seems very comedic.

He was voiced by the late David Ogden Stiers who also voiced Cogsworth and Jumba Jookiba.

Mr Jolly stays at home with Pretty Boy, Leonard's bird and they have adventures of their own while Scott and Leonard are at school. He left the house twice.

In one, Leonard brought Pretty Boy for pet day while Scott brought him.

In another, he and Pretty Boy went to Leonard's school again because they thought they were each missing.

In the movie, he and Pretty Boy go on a road trip to find Spot to warn him about Dr. Ivan Krank upon hearing from The Barry Anger Show in which Anger reveals that Krank cannot turn animals into people, but rather into terrifying mutant creatures. They decide that they must track down Spot and stop him from being turned into a monster, but Mr. Jolly is afraid to leave the house. Pretty Boy assures him that they can be tough despite their size.. After getting lost in Cuba, hitching a ride with bikers, sneaking on a plane, and arriving by a viaduct they make it to Leonard and they find out has happened to Spot.

When Leonard goes to turn into a dog, Spot (as a man) shows up and they warn him about Leonard going to the lab. And they go to save him. At the lab, Jolly is turned into a butt-ugly man for a few seconds. When Krank is turned into a mouse, Jolly chases him outta the lab.

At the end, Spot (who is a dog again) has a plan on how to get home. He dresses up as Scott and Jolly and Pretty Boy are hiding under the bed. 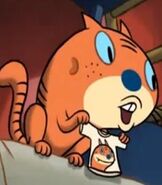