To move her house to the lee of the stone away from the plow, to save her son Timothy (all succeeded)

Mrs. Brisby or Brisby for short, is the main protagonist the 1982 animated film The Secret of NIMH and a supporting character in its 1998 direct-to-video animated sequel, The Secret of NIMH 2: Timmy to the Rescue. She is the widow of Jonathan Brisby and the mother of Teresa, Martin, Cynthia, and Timmy. She is an adaptation of Mrs. Frisby from the Rats of NIMH book series.

She was voiced by the late Elizabeth Hartman in the first film, and Debi Mae West in The Secret of NIMH 2.

Despite being sweet and very charming, Mrs. Brisby was shy and timid through the beginning. She used to get scared real easy, especially by Dragon the cat and heights. But when Timothy became ill, she became willing to do anything to save him, even if it meant visiting the Great Owl and the rats of N.I.M.H. (The National Institute of Mental Health). She is also motherly because she has four children to take care of.

She was first seen visiting Mr. Ages to get medicine for Timmy, whom just became ill by pneumonia. Along the way home, she meets Jeremy the Crow, who was tangled in the strings. She warns him about Dragon the cat, but Jeremy wasn't taking her seriously until Dragon really shows up. While escaping the cat, Mrs. Brisby lost the medicine and falls into the water with Dragon. She soon climbed into the water mill and cried, but than was thrilled with relief when Jeremy shows up and gives her the medicine. As she started to walk home, Jeremy offered to fly her there, but the response is no, due to her acrophobia or fear of heights. When she arrived home, she found Auntie Shrew throwing into a fit about the Brisby children and tells Mrs. Brisby to prepare to move her "very very odd family." As she serves Timmy the soup mixed with the medicine, she did the best she could to comfort the children to not worry.

In the morning, the farmer started to plow the fields. Mrs. Brisby takes three of her children out of the house and tell them to go with Auntie Shrew while she tried to stop the plow, despite Shrew's protests. While she got onto the plow machine, she was soon frozen with fear, leaving Auntie Shrew to stop the machine herself. When the plow stopped, Mrs. Brisby and Auntie Shrew ran away into the grass, where Mrs. Brisby cried for her late husband, Jonathan. Auntie Shrew adviced her to go see the Great Owl, but Mrs. Brisby hesitated because she knew that owls eat mice. But she went anyway by riding on Jeremy's back despite her fear. When the owl asked her why she came, she tells him of Timmy and the plow. The owl refuses to help until he'd learned her name. Mrs. Brisby was surprised that the owl knows about Jonathan. The owl soon told her to go to see Nicodemus in the rose bush to help move her house to "the lee of the stone." As of that moment, her journey to survival had begun.

Mrs. Brisby went to the rose bush with Jeremy following her in disguise. Mrs. Brisby tells Jeremy to leave, but Jeremy refuses until she flirted him to go and watch over the children. She went inside, but was soon chased away by a rat named Brutus. She was relieved when she found Mr. Ages, who then has a broken leg, and had him take her to see Nicodemus. Along the way, she meets Justin, the captain of the guard, and it was hinted to the viewers that she might be developing a crush on him by the way she hesitated after she mumbled "beautiful" while looking at him and he said "ma'am?" She soon met the rest of the rats, who eventually agreed to help. Soon after that, she finally meets Nicodemus, who told her all about her husband's heroism and how the rats of NIMH came to be. He gives her a beautiful red amulet that Jonathan had meant to give her and tells her of its powers.

As they were leaving the hideout, she volunteer to drugged Dragon the cat tonight. Even though she's scared, she (with her cape off) puts the drug in Dragon's food and ran, but soon was captured by Billy, the farmer's son. Later that night, she overheard the farmer on the phone that NIMH's coming tomorrow. She eventually escaped and ran to warn the rats. She was soon attacked by Jenner, who tries to take the amulet, and watches the battle between Justin and Jenner. As soon as the battle's over, she went over to comfort her children and learned that the concrete block is sinking down in the mud. The rats and Brisby tried to save it, with the children inside, but the ropes broke. Justin grabs her to save her from drowning, but she has to save her children. Suddenly, the amulet, and soon Mrs. Brisby herself, glows brightly red and rises the block to the lee of the stone. The next morning, she was getting her hands mended by Teresa and gives Jeremy, who just met a lady crow, an advice. When her children asks when they can go to Thorn Valley, she answers, "When you're older."

Role in the sequel

She didn't have much of a major role anymore in the sequel, she was seen saying goodbye to Timmy and telling him about Jonathan's legendary past. She is only seen again during the victory parade in the valley. It's unknown what became of her after this. 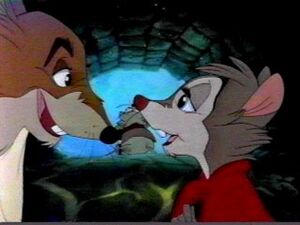