To protect and care for Dumbo.

Mrs. Jumbo is a major character from Disney's 1941 film Dumbo. She is Dumbo's mother who was locked in a cage by the Ringmaster. She is voiced by Verna Felton in the movie, but only one speaking line.

Mrs. Jumbo tries to receive one of the parachutes containing baby animals, but she didn't. During her birthday, Mr. Stork offers him a parachute with a baby elephant revealing to be Dumbo (called "Jumbo Junior"). After the parade, Mrs. Jumbo gets mad with Smitty (one of the brats who make fun of Dumbo). This causes the Ringmaster to get mad, sending his men to stop Mrs. Jumbo. As a failure, she angrily gets the Ringmaster to avoid getting caged. One of the circus keepers, sent by the ringmaster, chained her foot. The ringmaster tries to calm her down, but she refused to listen to him. The ringmaster puts her in a cage, and a sign marked "Mad elephant". Mrs. Jumbo cannot be freed until Dumbo becomes a circus star, according to what the Ringmaster said. After the act, Dumbo reunited with Mrs. Jumbo during the song ("Baby Mine"). But she wasn't free yet, so Dumbo started to do an amazing trick the audience never saw before: flying. After that, Mrs. Jumbo was freed by the Ringmaster. Outside the movie, Dumbo asks the Ringmaster to free his mother for being a circus star. The Ringmaster agrees to free her. Before the show is over, Dumbo flies to Mrs. Jumbo reunited happily.

Mrs. Jumbo makes her first game appearance, but is imprisoned in the Ringmaster's lair. Unlike in the film, she is voiced by Tress MacNeille. She talks to Jiminy Cricket why Dumbo is unable to fly right now for being in a falling act.

Mrs. Jumbo has made numerous non-speaking cameos in House of Mouse. 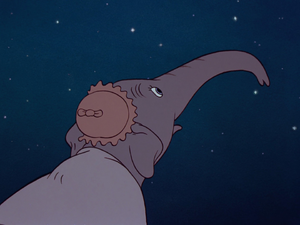 Mrs. Jumbo longing for a child 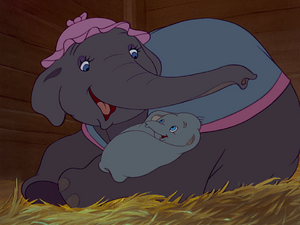 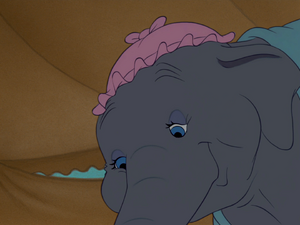 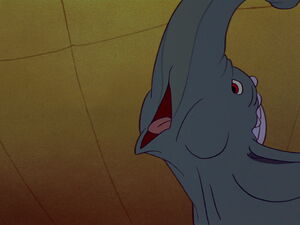 Mrs. Jumbo's heroic breakdown after being chained and having her son away from her 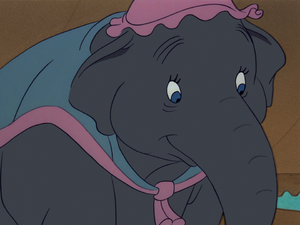 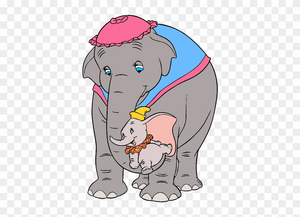