Charismatic Heroine
Ms. Chalice, also known as The Legendary Chalice, is a major supporting character in the 2017 shoot 'em up Cuphead and a playable character in the DLC The Delicious Last Course. She was originally a specter who haunted the three mausoleums located across the Inkwell Isles and would grant Cuphead and Mugman special abilities should they defeat all the ghosts inside each mausoleum. However, she later gains a young physical form during The Delicious Last Course to help Chef Saltbaker gather ingredients to make a Wondertart.

As The Legendary Chalice, she is a golden, anthropomorphic chalice (often confused for a trophy) who has a beauty mark located on her left cheek, a blue transparent body, and a straw-like halo above her head, indicating that she is deceased. She also wears white gloves with golden cuffs and red lipstick.

A statue of her located in "Rugged Ridge" that portrays her while she was alive indicates that she also wore a toga and high heels.

As Ms. Chalice, she is still a anthropomorphic chalice, but she no longer wears lipstick and her beauty mark is moved to her right cheek (although it would occasionally reappear on her left one). She also bares a further resemblance to Cuphead and Mugman, with milk and a straw being stored in her head. Her attire consists of white gloves, a blue skirt with white bloomers underneath, and a pair of golden shoes.

Ms. Chalice's design is slightly altered in The Cuphead Show!. She has visible eyebrows and wears golden high-heels, a more greenish skirt, and has a white shirt collar.

The Legendary Chalice is wise and helpful. She is notably generous as evidenced by the fact that she willing grants Cuphead and Mugman special abilities after they save her inside each of the mausoleums.

In The Cuphead Show!, Ms. Chalice is depicted as a street-smart mischief maker who uses her charms to get what she wants.

The Legendary Chalice can be found inside three mausoleums within the Inkwell Isles, one in each respective section. Inside, she will call out for help from the brothers inside an urn, which the brothers must defend from hostile ghosts.

The ghosts will not harm the brothers, but they can only be defeated by parrying them, as indicated by their pink colors. Each mausoleum introduces different ghosts that have different movement patterns or require multiple parries in order to defeat them. Once all the ghosts have been defeated, The Legendary Chalice will emerge from the urn. She will thank the brothers for their help and grant them one special ability known as a "Super Art".

She is later revived in "The Delicious Last Course" DLC as a playable character called Ms. Chalice and resembles Cuphead and Mugman.

Ms. Chalice first appeared in the episode In Charms Way. She meets Cuphead and Mugman after they follow her out of a movie theatre and decides to teach them how to persuade people with their charisma. She also reveals to have the ability to change her appearance from physical form to spectacular form.

Ms. Chalice as she appears in "The Last Course" 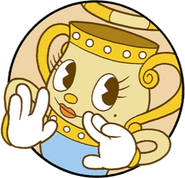