Emi Fukukado, known professionally as the Smile Hero: Ms. Joke or simply Ms. Joke, is a minor character in the 2014 Japanese superhero manga series My Hero Academia and its 2016 anime television series adaptation of the same name.

Emi was one of many professional heroes operating in the island nation of Japan whose job it was to protect citizens from harm and thwart evil-doers. Her quirk "Outburst" gave her the power to force her targets to burst out into an intense laughter. The laughter she induced was so intense that her victims would have their motor skills dulled, making it easier for Fukukado to defeat them. She was known as a jovial heroine whose crime fighting was every bit as peculiar as her.

She is voiced by Mariko Nagai in the Japanese version of the anime and by Amber Lee Connors in the English version.

Emi Fukukado stood at five feet and five inches tall. She had a slender yet athletic build with strong-looking arms and was fairly well endowed. She had dark green eyes that had sparkling pupils and her seafoam-green hair that travelled down to her shoulders had a short fringe with splayed ends that was usually obscured by an orange bandana she wore as part of her hero costume. Perhaps her most noticeable feature was the broad smile that was usually adorned across her face.

Ms. Joke's hero costume consisted of the aforementioned orange bandana, black boots, a sleeveless dark-blue top with a high collar that was buttoned up to her chin, a small black exposed corset around her waist with yellow smiley-face pins, a white v-shaped belt just below the corset, and puffy shorts with a green and yellow vertical striping color scheme. On her hands, she wore a pair of padded yellow gloves with golden plates over her knuckles that presumably acted similarly to brass knuckles. She also wore a pair of thick metal cylinders around her wrists that acted as wrist guards. Additionally, she was sometimes seen wearing a white respirator mask with smiley-face designs on the filters.

Emi Fukukado was a Japanese girl living in the Kumamoto Prefecture who was born into a superhuman society where eighty percent of the world's population had superpowers referred to as quirks. In order to ensure that the abuse of said powers would not cause society to crumble, the governments of the world including Japan passed a law that made it illegal to use quirks in public. There was however an exception to this rule—professional heroes. Heroes were individuals who protected society from evil-doers known as villains and as such were able to freely use their quirks in pursuit of justice upon obtaining a hero license. Fukukado's quirk, called "Outburst," allowed her to infect a target with intense laughter that dulled their motor skills and cognitive abilities.

After procuring a hero license during her early adult life, Emi became a professional hero known as the Smile Hero: Ms. Joke. In combat, she would use her quirk to dull her opponent's sense before striking with her bare fists. Her personal fights against crime became well known for their wackiness. At some point she met Shota Aizawa a.k.a. the Erasure Hero: Eraser Head. Aizawa, whose quirk "Erasure" allowed him to temporarily erase another person's quirk, had a hero agency near Emi's which led to them frequently teaming up to fight crime. Although Eraser Head was introverted and acted aloof towards Ms. Joke, the pair were actually good friends. Emi later claimed that their relationship went beyond platonic during that time, although Aizawa denied her statement and Fukukado herself may've been joking when she claimed such a thing.

Sometime later, Fukukado became a teacher at Ketsubutsu Academy High School, an educational institution dedicated to cultivating aspiring professional heroes. Eraser Head also began teaching, although he went to the country's most prestigious hero school instead—U.A. High School. Rather ironically, the students of Ketsubutsu felt a rivalry towards the superior students of U.A. High, meaning that Joke and Eraser Head were put at odds in terms of profession. Despite their inferiority to U.A. students, Emi's pupils were still full of vast potential that she helped nurture.

At twenty-eight years old, Emi and many other pro heroes attended the U.A. Sports Festival. The Festival was considered the largest sporting event in the world and consisted of U.A. students competing against each other in various athletic and martial activities. She, like many other heroes, presumably sought to observe the potential of the upcoming heroes who were being supported by the most prestigious hero academy in the world. The finals of the Sports Festival consisted of a martial tournament between the last sixteen participants of the event. In the matches, each fighter would have to try to render their opponent unable to fight or force them out of the arena if they wanted to secure victory.

The first match consisted of a hero studies student named Izuku Midoriya facing off against a general studies student named Hitoshi Shinso. Although he put up a good fight with his "Brainwashing" quirk, Shinso ultimately lost the match against his hero studies opponent. Many pro heroes thought it was unfair that Shinso was in the general studies course rather than the hero studies course, considering his powerful quirk should've secured him a place in the latter. However, because Shinso's quirk affected the mind and the U.A. Entrance Exam consisted of battling robots, Hitoshi had been unable to get into U.A.'s hero course, instead having to choose the general studies course instead. Ms. Joke was among the heroes who expressed disappointment towards Shinso's placement.

Months later, the time of the biannual Provisional Hero Licensing Exam arrived. The Exam consisted of heroes-in-training from across the country participating in a series of gruelling tests in the hopes of procuring a provisional hero license that would allow them to make legal use of their quirks in public until they acquired a proper license and became a fully-fledged professional hero. Ms. Joke's second year Ketsubutsu children were one of the many hero academy classes that travelled to the Takoba National Stadium to participate in the License Exam. Because of the U.A. Sports Festival, Emi knew that the students from U.A. High would be targeted by practically everyone from the beginning of the exam, as the quirks of the students were known to the general public that had watched them on television. The students of Ketsubutsu were no exception to this, especially Yo Shindo, who sought to use U.A. to get him and his classmates through the exam.

Outside the stadium, Emi spotted Eraser Head and his students disembarking from their bus. Fukukado enthusiastically approached her old friend and jestingly asked him to marry her, much to his irritation. Midoriya from the Sports Festival recognized her and gave his classmates an excitable description of the Smile Hero. After receiving a couple of cold rebukes from Aizawa that only spurred her on, Ms. Joke turned her attention to the Erasure Hero's class who were understandably confused as to how she knew their reclusive teacher. Fukukado explained how she and Eraser knew each other, bashfully talking about the "mutual love" that bloomed between them during their partnerships. With introductions out of the way, Joke beckoned over her class to introduce themselves to their U.A. counterparts. As the classes and their respective teachers headed into the stadium, Joke worryingly asked her friend if he hadn't warned his students that they would be singled out, only to have her question ignored by Eraser.

Raid on the Gunga Mountain Villa

During March another few months later, a massive task force was put together to take down the Paranormal Liberation Front. The PLF was a gigantic criminal organization led by the supervillain Tomura Shigaraki that sported a paramilitary of over a hundred thousand quirk-possessing warriors. Thanks in part to investigations made by the authorities and the number two-ranked hero Hawks, the heroes were able to pinpoint the location of the Front's primary base-of-operations—the Gunga Mountain Villa. Furthermore, a secondary location maintained by the PLF, Jaku General Hospital, was also discovered. Practically the entire hero population of Japan was brought together in secret to lead a joint raid on the two locations.

Ms. Joke was among the dozens of seasoned heroes tasked with arresting the numerous occupants of the Gunga Mountain Villa, where a bulk of the PLF's forces were kept alongside many of its commanders. The assault began when the hero Cementoss used his quirk to tear down the massive walls of the villa, allowing Emi and the other pros to rush into the building far easier. The ambush caught the villains off guard, allowing Joke and the other heroes to swiftly arrest a large number of PLF warriors and cut off the exits to the villa. Regardless, the pros received steep resistance from the numerous powerful warriors that faced them. 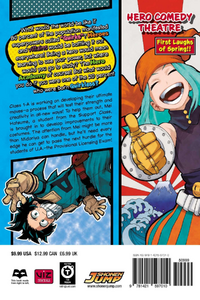 The Smile Hero: Ms. Joke on the back cover of the manga's twelfth volume. 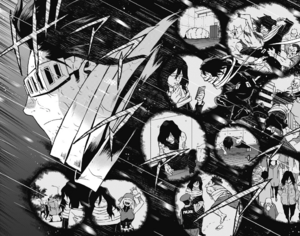 The Smile Hero was one of the integral parts in the career of the Erasure Hero: Eraser Head.

Fukukado and various other heroes storming the Gunga Mountain Villa to arrest the villains.

Ms. Joke and the other pros facing the warriors of the Paranormal Liberation Front.
Add a photo to this gallery

Retrieved from "https://hero.fandom.com/wiki/Ms._Joke?oldid=2283212"
Community content is available under CC-BY-SA unless otherwise noted.