Professor Utonium and the Powerpuff Girls

She is patient, beautiful, understanding and very protective of her students, making her a well-liked, motherly figure.

She may represent a nod to cartoonist Bil Keane, creator of The Family Circus, as she closely resembles that cartoon's character Mommy (Thelma), with dark hair and flip hairdo.

She also seems to have a fair command of general relativity, able to produce complex equations at incredible pace, as seen in "Speed Demon."

Her name is also revealed by Bubbles asking her that Billy throws paper at her in "Tough Love"; however, she is under Him's hatred spell, so her first lines are rather callous.

In several episodes, her innate motherly instincts come into play when she is teaching her surrogate children in class, particularly when weaker kids (like Elmer Sglue in "Paste Makes Waste") get picked on and bullied by the other children.

Ms. Keane also forbids any fighting in school even if there's a crisis taking place within it thus she convince the girls that there other ways to solve problems other than fighting as demonstrated in the episode "Schoolhouse Rocked."

She once had a relationship with Professor Utonium and went on a date with him in "Keen on Keane," however the romance failed after she refused to believe the Professor's story about a cat who controlled his actions (the events of the episode "Cat Man Do") and eventually broke up after an argument.

She and Miss Bellum are the only female characters in the show that serve as mother figures to the Girls.

In Demashita! Powerpuff Girls Z, Ms. Keane (voiced by Tabitha St. Germain) first appears in episode 3 where like her original counterpart, she inherits her original traits such as kindness and patience but lacks strictness.

She is talented in many ways, which she used to counter Momoko, Miyako, and Kaoru's excuses; this includes knowledge on medicine for non-existent medical conditions, such as dislocation of the stomach, and is able to speak mole and English.

She is also unfazed by the destruction Mojo causes and speaks to him as if he were a normal human being.

In fact, in episode 33 when Mojo asks her out on a date, she gladly accepts and even enjoys the date (though she still treats him as a monkey, as in ordering a "monkey ticket" for him at a movie house while getting an adult ticket for herself).

At the end of that episode, though, it is also revealed that she has a mole-man boyfriend named Ueno who appears in an earth-tunneling vehicle that emerges from the ground to pick her up. 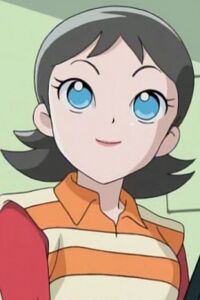 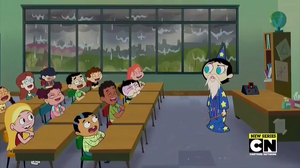 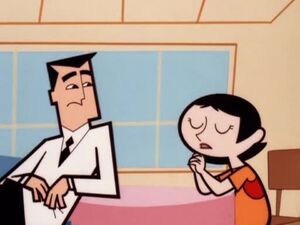 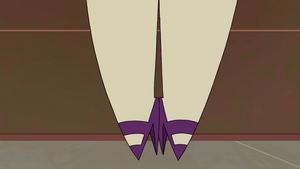