Carol Danvers is a minor heroine from Season 1 turned one of the main protagonists from Season 2 on TV Series The Avengers: Earth's Mightiest Heroes.

On Season 1, she is a simply soldier, but later, due to an accident that has sent her to the hospital, she will acquire extraordinary powers, thus becoming Ms. Marvel, a new heroine.

Carol Danvers appeared in episode "459", as a member of the military, presumably Air-Force. She was working in a joint military-S.H.I.E.L.D. facility dedicated to space exploration when she called in a friend of hers, Janet van Dyne. When Janet arrived with Hank Pym, Carol was greeted happily, where she told them that she called to get Hank's help.

Carol and her friend, a scientist named Dr. Phillip Lawson, showed Hank an object they had viewed on one of S.H.I.E.L.D.'s telescopes. She had stated that she personally believed that it was extra-terrestrial. But, not wanting to appear crazy, she wanted to obtain an expert's opinion, Hank Pym to be specific. When the object crashed through the telescope and landed on Earth, Carol grabbed a gun, should the object be dangerous.

She led Janet and Hank into the woods, where the object landed. On the drive there she told Janet that it wasn't nice to lead Hank around like she was. Upon arriving at the crash site, they were soon attacked by the object, revealed to be a Kree Sentry, an alien robot designed to wipe out a troublesome population before settlement. It aimed at her, due to the fact that she carried a weapon. She expressed the wish to shoot at the Sentry, but was stopped by Hank. The Sentry then took aim at her once more and fired. Upon Carol being disarmed, the Sentry turned and headed for the observatory.

Carol drove ahead and evacuated everyone but, as she was trying to evacuate Phillip, the Sentry attacked. Attacking the Sentry once more, she told Phillip to get out of the observatory. But, due to a wayward blast by the Sentry, a power grid exploded behind them. Phillip quickly shielded her with his body as the energy there passed through them, unknowingly merging their DNA slightly. Carol passed out as Phillip was revealed to be a Kree by the name of Mar-Vell.

After another battle with the Sentry, Mar-Vell got Carol to the hospital, where he was greeted by the Avengers. While answering their questions he stated that he wanted to help, that humans had so much potential. He stated that he believed that Carol deserved to live, before being corrected by Iron Man that he meant the human race. After destroying the Sentry, with help from the Avengers, Mar-Vell visited Hank, who was injured in the battle, and Carol in the hospital. He told Janet that he was sorry for what happened, and then looking at Carol's sleeping form, said to watch over them. After Mar-Vell's departure and Hank waking up, Carol was seen to be awake and floating above her bed, showing that she had obtained powers similar to Mar-Vell's. In Avengers: Earth's Mightiest Heroes Episode 4: Welcome to the Kree Empire she joins the Avengers. She works for S.W.O.R.D.

She also appears in the last episode "Avengers Assemble", with all super heroes from the earth to stop Galactus.

She is voiced by Jennifer Hale. 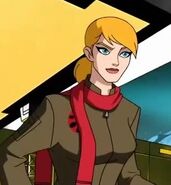 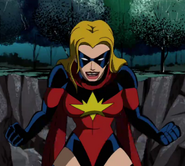 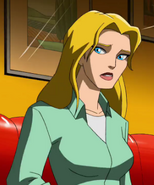 Carol Danvers is an agent of the S.W.O.R.D.