Stop Professor Marmalade and save the city (succeeded).

Ms. Tarantula is one of the three tritagonists (alongside Mr. Piranha and Mr. Shark) of the DreamWorks animated movie, The Bad Guys. She is a red-knee tarantula who is an expert hacker and the only female of the Bad Guys.

She is voiced by Awkwafina who played Courtney in the Angry Birds Movie series, Sisu in Raya and the Last Dragon, Ming Fleetfoot in Jumanji: The Next Level, Quail in Storks, Otto in The SpongeBob Movie: Sponge on the Run, and Katy Chen in Shang-Chi and the Legend of the Ten Rings.

Ms. Tarantula is a redknee tarantula with a tattoo on her left arm. She wears a black hoodie and headphones with light green details.

At some points during Marmalade's attempts at teaching the Bad Guys good behavior, Tarantula wears a light blue cat onesie.

Ms. Tarantula is always quick with her answers and as the only female member of the group she doesn't give her friends time off.

She is the queen of technology and when she finds some code she simply goes into monster mode using her many legs to gain speed and decrypt the codes, she prides herself on perfection and she is good at multitasking.

As Wolf and Snake flee from the police after their bank robbery, Tarantula hijacks the traffic lights to cause a crash into the police cars and then jumps into Wolf's car. She also orders a birthday cake for Snake while trolling him about his dislike of birthdays. Once Shark and Piranha are recovered, Tarantula notices that Piranha forgot the gift for Snake. Piranha claims he hasn't forgotten but Tarantula knows he is lying because he farts when he lies. The gang then escapes from an additional chase initiated by Wolf just to provoke Chief Misty Luggins.

Back at their lair, the Bad Guys insist on celebrating Snake's birthday but he ruins the moment by blowing out the candles before the song ends, although the cantankerous reptile making a toast for his friends. Tarantula then tries to remind Shark that Snake is going to pretend to share his ice cream stick with him, causing a fight which Tarantula and Piranha try to stop when Shark again falls for it. They quickly return their attention to TV news about their heist, but the gang is quickly outraged when Governor Diane Foxington disparages their reputations, Tarantula regretting voting for her. Faced with this affront, Wolf convinces his friends to make the ultimate move of their lives where many other thieves have failed, that is to say, stealing the Golden Dolphin trophy at the Good Samaritan Award gala.

On the day of the heist, Tarantula poses as the decoration on the hat of Shark's disguise and then sneaks out until she reaches the surveillance room where she traps the vigilante in his web and begins the hack. When Wolf, Snake, and Piranha manage to enter the room where the golden object is kept but find themselves confronted by the security system designed specifically against them, Tarantula tries to outwit the system only to have her first attempt fail to her dismay. Wolf and Snake giving amateur advice that doesn't help with the impending trophy presentation and Luggins trying to get in, Tarantula goes all out by pulling out extra keyboards from her computer so she can use six limbs instead of two. Unfortunately, Piranha's farts intoxicate her before she finishes but a diversion from Shark as Luggins has opened the door allows the foul smell to escape and Tarantula gets his way.

Their ultimate successful steal, the Bad Guys advance with pride towards the exit. However, Wolf's tail starting to wag at Professor Rupert Marmalade's speech blows their cover and the dozens of hidden cops capture them, Tarantula being locked in a jar and then chained around the waist in a van. After Wolf convinces Marmalade and Diane to give them a chance to be better people, his friends believe he's gone mad until the canine explains to them that his plan is to make it look like they feign redemption only to steal the dolphin again, much to the devilish excitement of the rest of the gang.

Housed in the professor's mansion, the Bad Guys attend his redemption classes but fail miserably each time. Marmalade then gives them a humanitarian mission to enter a research laboratory to save guinea pigs to be used as guinea pigs, this with animal costumes so grotesque that Tarantula says goodbye to his dignity. The mission is ultimately a fiasco after Snake swallows all the critters but thanks to Wolf convincing Diane to give them one last chance and rescuing a cat from a palm tree, the Bad Guys earn a spot at the Meteorite Festival Gala.

Upon arriving, the band is cheered on by the crowd, much to their dismay as it had never happened to them. Despite some complications in their attempts at theft, the Bad Guys almost achieve their objectives until a Wolf who has taken a liking to being loved does not go through with it at the last moment. Suddenly, a blackout occurs and the meteorite is stolen, with everyone quickly blaming the five animals for trying to get away, only for Piranha's childish recklessness to get them caught. Locked in the van again, they receive a private visit from Marmalade who turns out to be the real thief, having viciously used the Bad Guys from the start to steal the meteorite, making it an important source of energy.

Arriving in prison, the gang questions Wolf about his change in behavior since their first robbery attempt and are all shocked to learn that Wolf likes to be good. Like the others, Tarantula is shocked when Wolf admits he doesn't want to be a villain anymore and dares to say his lifelong friends are just a burden to him. The Bad Guys are subsequently rescued by legendary thief Crimson Paw who turns out to be Diane all along. Back on the coast, Tarantula, Snake, Shark, and Piranha abandon Wolf for betraying their friendship, though Tarantula and Shark seem to be the least bitter towards Wolf.

Back at their lair completely drained of their loot and belongings, Tarantula is first surprised by Snake's selfless gesture towards a crying Shark by giving him the last ice cream stick, especially since Snake is the most infamous of the bunch. She begins to think that maybe Wolf was right that they can be so much more than horrible villains. Tarantula's butt, Shark's fin, Piranha's scales and Snake's tail start wagging uncontrollably similar to Wolf's tail and this makes them happy but Snake refuses to believe they can be anything other than the despicable Bad Guys and abandon them in anger.

Ultimately regretting having abandoned Wolf, Tarantula, Shark, and Piranha rescue him and Diane from a trap by Marmalade and happily reconcile with Wolf. They then board the meteorite on Wolf's car under the nose of Marmalade now allied with Snake and escape from the manor. The fleeing band is chased by three armored vans driven by guinea pigs under the control of Marmalade. Helped by Diane on a motorcycle, Tarantula manages to hack the vehicles and when the vixen asks her about her hacking talent, Tarantula shyly admits having learned everything thanks to Youtube. With the foursome about to return the meteorite to the police, they realize they miss Snake despite betraying them and decide to go back for him.

Pursuing Marmalade's helicopter to try and get Snake back, the gang are chased by hundreds of guinea pigs, with Tarantula coming to say that this isn't how she imagined her day. Marmalade eventually betrays Snake and uses him to demand the meteorite in exchange, then throws him into the void where the meteorite once crashed, prompting the foursome to attempt to jump across the destroyed bridge by car to save Snake but also end up falling into the crater. As they continue to fall, the five friends are happy to be all reunited to the point of crying until Wolf uses his grappling hook to stop the fall.

Returning to the top of the bridge, the Bad Guys are once again surrounded by the cops and although Diane is ready to plead their innocence to the point of revealing her criminality, Tarantula and her friends decide to obediently go inside at once to atone for all of them. their previous thefts and to spare Diane from sacrificing herself for them. Tarantula is then exasperated that Marmalade gets away with it until the meteorite turns out to be just a lamp and Snake pretends to ally with Marmalade to better bring about the destruction of the real meteorite left in the manor. Marmalade's bloody defeat is complete when Luggins mistakes him for the real Crimson Paw upon finding on the guinea pig a diamond Diane once stole and arrests him.

A year later, the Bad Guys are released for good behavior and are greeted upon their release from prison by Diane who still has plans for her five friends. 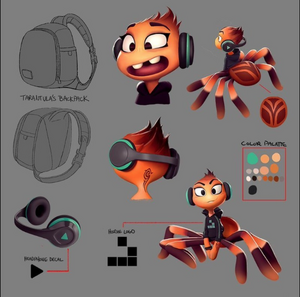 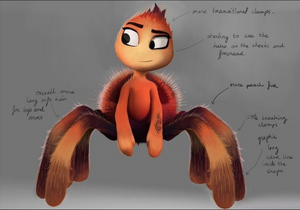 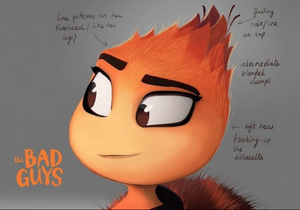 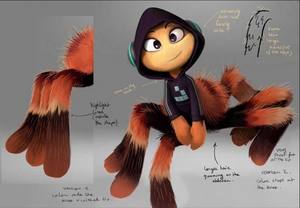 "Oh, my gosh, you fixed it.", Tarantula being sarcastic at Wolf and Snake's advice. 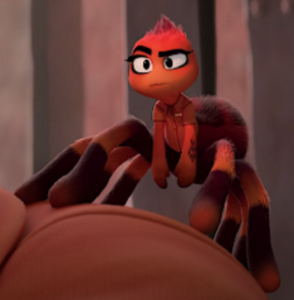 "Maybe Wolf was right. Maybe we can be more than scary villains." 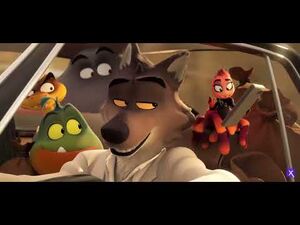 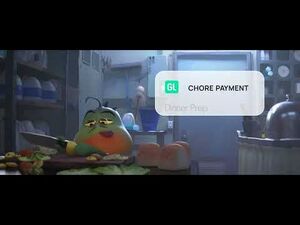 The Bad Guys are learning how to be good (with money). 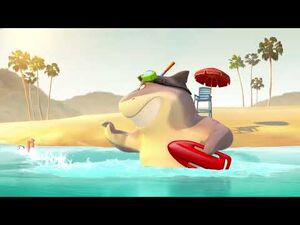 The Bad Guys in GSC!