Usually varies in each film

MudBud is one of the protagonists of the Air Buddies series. His favorite sport is volleyball.

Mudbud is a golden-furred male puppy, and is usually covered in mud. He wears a handkerchief as a collar, to compliment his adventurous personality.

MudBud is the filthiest of the Air Buddies, hence his name. He is also disgusting, adventurous, caring and brotherly. He has 3 brothers: B-Dawg, Budderball and Buddha and one sister named Rosebud. He dislikes baths and being clean. He always ends his sentences with "Dude" everytime he speaks. An adventurous golden retriever puppy, he and the rest of the Buddies often go on radical adventures together. He is also considerate about his brothers and sister. 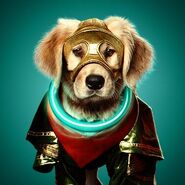 Retrieved from "https://hero.fandom.com/wiki/MudBud?oldid=2079280"
Community content is available under CC-BY-SA unless otherwise noted.