NOTE: This article is about the incarnation of Mufasa from the 2019 movie. The mainstream version can be found here: Mufasa (Disney).

Dad/Father (by Simba)
Sire (by Zazu)
Big Brother (by Scar)

Great King of the Past

Spend time with his family

Mufasa is a major character of the 2019 remake of The Lion King. He is the King of Pride Lands as well as Scar's older brother, Simba's father and Sarabi's husband.

He is based on the character from the 1994 film of the same name, and he was voiced by James Earl Jones, who also voiced his cartoon counterpart.

Mufasa is a benevolent ruler almost to a fault. He is very wise and cares greatly about the animals in the Pride Lands, as well as his family. The Pride Lands thrive under his reign, and he provides Simba with valuable advice on how to rule the land appropriately. And he is also known as a trusting, sweet, aspiring, dignified, protective, powerful, fatherly, understanding, respectful, righteous, playful, loving, humble, optimistic, bold, patient, ill-tempered at times, instructive, meticulous, level-headed, inspirational, commanding, regal and selfless lion.

However, Mufasa has his weaknesses. His love for his family is exploited by his younger brother Scar, who often tricks Simba into dangerous situations that forces Mufasa to rescue him at the risk of his own life. But even though Mufasa knows of Scar's jealousy and rage thanks to an intense fight between the two over the throne, he refuses to exile him because he is still family no matter what the cost. It leads to his death by his malicious brother at last.

Not much is known about Mufasa's life prior to the events of the film. What is known is that at some point, he and Scar had a fight and competed for Sarabi's affections to which Mufasa won. Though not outright said, it is possible that the fight led to Scar gaining his trademark scar. He became the king of the Pride Lands, ruling alonside his wife Sarabi later on.

Mufasa is seen at the start of the film standing at the peak of Pride Rock as the animals of the Pride Lands arrive for the presentation of Mufasa's newborn son Simba in the first place. Mufasa greets his majordomo Zazu and Rafiki. Mufasa leads Rafiki to his wife Sarabi, who is cradling Simba in her paws afterwards. Mufasa watches on as Rafiki uses the powder from roots to make a mark on Simba's forehead before he lifted up the cub and presented him to the other animals.

Later that day, Mufasa catches his younger brother Scar trying to ambush Zazu. He encounters Scar over missing Simba's presentation, to which Scar claims that he forgot afterwards. Then, Mufasa tells Scar that one day Simba will be king and Scar will have to obey him. Scar is unsatisfied that he is not next in line to being king any longer, but he assures Mufasa that he would not dream of challenging him again. After Scar leaves, Zazu questions Mufasa over why he did not run Scar out of the Pride Lands years ago, to which Mufasa replies that Scar is his brother and as long as he is King, Scar has a right to live in the Pride Lands. Zazu begins to tell Mufasa about about having a cousin who thought he was a woodpecker, but stops when he sees Mufasa leaving.

Months later, Mufasa is seen sleeping inside Pride Rock with Sarabi and the rest of the pride before being woken up by Simba. He takes Simba to the top of Pride Rock and tells him that everything the light touches is their kingdom and says that a true King searches for what he can give rather than take. When Simba points out a shadowy place, Mufasa says that the shadowy place is beyond their borders and tells Simba to never go there. Mufasa then takes Simba around the Pride Lands and teaches him about the Circle of Life before Zazu arrives to give Mufasa the Morning Report. As Zazu drones on, Mufasa decides to give Simba a pouncing lesson using Zazu as the target. After Simba succeeds in pouncing on Zazu, Mufasa congratulates him as Zazu flies off in annoyance. However, Zazu returns moments later to tell Mufasa that hyenas are in the Pride Lands. Mufasa asks Zazu where Sarabi is, to which Zazu replies that she is leading an attack. As Mufasa leaves to join her, Simba pleads with his father to let him come too, but Mufasa refuses and tells Simba to stay with the other cubs, before telling Zazu to take Simba back to Pride Rock.

Later that day, Mufasa arrives in the Elephant Graveyard to save Simba and his friend Nala from hyenas. He then warns the hyenas' leader Shenzi to not come near Simba again. After returning to the Pride Lands, Mufasa tells Zazu to take Nala back to Pride Rock whilst he teaches Simba a lesson. Zazu tells Mufasa to go easy on Simba as Mufasa was like him as a cub. After Zazu and Nala leaves, Mufasa scolds Simba for disobeying him before telling him about the Great Kings of the Past.

The next day, Mufasa is at Pride Rock with Zazu when Scar arrives to say that there is a stampede in the gorge and Simba is down there. Mufasa rushes to the gorge with Scar whilst Zazu flies on ahead. After arriving at the gorge, Mufasa is told by Zazu of Simba's whereabouts. Mufasa goes into the gorge and gets the tree Simba is on and tells him jump to him. However before Simba can do anything, a wildebeest crashes into the tree, causing it to split into pieces. Fortunately, Mufasa manages to pick Simba up and placs him on a ledge out of harms way. Just then, Mufasa is knocked back into the stampede by another wildebeest. He manages to leap out of the stampede and starts to scale one of the walls of the gorge. As he climbs the wall, Mufasa sees Scar at the top and asks for his help. However instead, Scar grabs Mufasa's paws and digs his claws into them, causing Mufasa to roar in pain. Scar then says "Long Live The King" before striking Mufasa in the face, sending him back into the stampede.

After the stampede is over, Simba (who had not seen what Scar did and believed that Mufasa lost grip) goes back into the gorge and finds Mufasa's lifeless body and mourns his father. Scar then arrives and tricks Simba into thinking that he caused Mufasa's death (as Simba had roared seconds before the stampede started) and tells him to run away and never return.

Years later, Mufasa's spirit comes to a now young adult Simba urging him to return to the Pride Lands and take his rightful place as King.

After Simba returns to the Pride Lands and defeats Scar, he ascends Pride Rock where he hears Mufasa say "Remember" before roaring in victory and becomes King.

At the end of the film, it is shown that Simba married Nala and had a daughter with her, making Mufasa a grandfather. 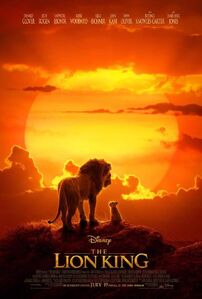 Mufasa and Simba on the remake's poster. 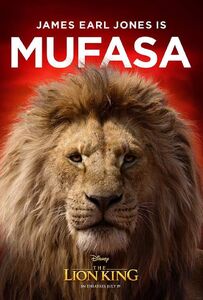 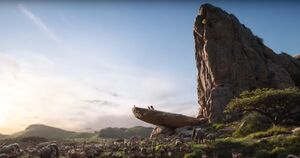 Mufasa and Sarabi watching Rafiki presenting Simba to the animals of The Pride Lands.

Mufasa with his brother Scar and Zazu 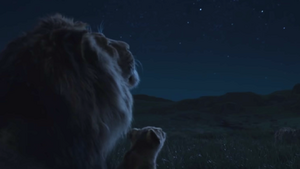 Mufasa telling Simba about The Great Kings Of The Past 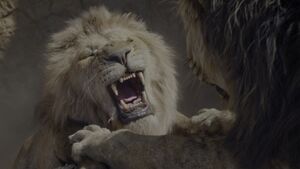 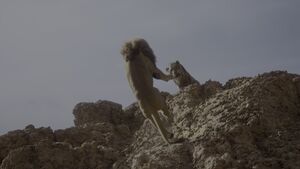 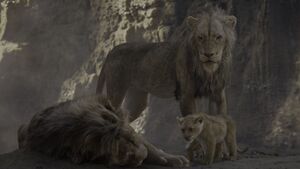 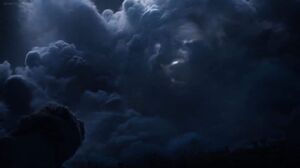 Retrieved from "https://hero.fandom.com/wiki/Mufasa_(2019)?oldid=1730165"
Community content is available under CC-BY-SA unless otherwise noted.