Get a girl (ambiguously succeeded)

Jin (formerly)
Anyone else pestering him

On & Off Vagabond Samurai
Mugen (無限, Infinity) is one of the main characters of Samurai Champloo along with Jin and Fuu. Both Mugen and Jin accompany Fuu in her search for "the samurai who smells of sunflowers." Mugen serves as a foil to Jin in terms of personality and disposition. His fighting style is characterized as being reckless and erratic.

He is voiced by Kazuya Nakai (Japanese) and Steve Blum (English), the latter of whom famously known for voicing Spike Spiegel.

During the title cards, his totem is the rooster.

Mugen has messy brown-black hair in an afro-like style (similar to Spike Spiegel's from Cowboy Bebop) and a faint beard. His clothing is anachronistic as well, reminiscent of baggy hip-hop fashions of today.His attire consists of a grey shirt with a stitch pattern running down the middle of the shirt ending at the halfway point of the shirt. He wears this under a red long-sleeve gi that functions as a jacket. He wears hakama cut off at shorts-length, resembling loose-fitting Bermuda shorts and Japanese Geta (wooden sandals) on his feet. these geta are fitted with several metal strips on the soles, allowing him to use his sandals as blocking devices. He has two blue ring tatoos, two on each wrist and two just above the ankles. Lastly, he carries his sword on his back with a sash that goes from his left shoulder to his right hip. It has a zig-zag pattern of green and brown.

Rude, lewd, vulgar, and nihilistic, Mugen is something of an anti-hero. He is fond of fighting and has a tendency to pick fights for petty reasons. In several episodes it is made clear that Mugen is a womanizer, and his libido often gets the better of him. Character designer Kazuto Nakazawa stated in an interview: "When I was doing character design, the most difficult one was Mugen, as I expected. I'm pretty sure that as far as the director's image went, he probably was thinking of someone like a 'rapper who acts like a bad guy.' But the way Mugen acts is relatively based on his core conviction."

Mugen was born in a penal colony on the Ryukyu Islands (most likely Miyako Island since it was a penal colony in the past), which in the Edo period was a separate kingdom with close ties to the Satsuma domain of Japan. His name means without limitation, as the components of it are the characters for "without" and "limitation." Incidentally, he writes his name using the infinity symbol (∞), a pun on his name, 'Mugen,' which is a homophone of the Japanese word for 'eternity'. His Japanese is quite rough and "Yanki." He is illiterate until later in the show. The exact date of his birth and much of his past is shrouded in mystery. His style of clothes suggests he may be of Ainu origin. This appears to be further supported later on by Mugen remarking that he grew up on the same music an Ainu fugitive was playing (though the Ainu man came from the far North, and Mugen came from the far south). Another reason for the similarity may be because the Ainu of the north and the Ryukyu of the south are from the same cultural and genetic stock before being displaced later by the Yamato Japanese. In episode 20 "Elegy of Entrapment, Verse 1," Mugen states that he never knew whom his parents were. The blue tattoos on his wrists and ankles indicate that he was once in prison. The circumstances of his imprisonment are unclear at first, but it is later revealed that he was to be executed for engaging in piracy.

Mugen's highly unorthodox swordplay and a fighting style based on breaking - dubbed "champuru kendo" (Champloo Kendo in English) and ostensibly developed by himself - taking bits and pieces from all forms of martial arts and making up the rest on-the-go as he fights his opponents, make him a force to be reckoned with. He carries two blades, his principal weapon a unique sword with a curved blade and a hilt with two prongs sheathed across his back and the other a small tantō concealed at the end of his scabbard (only resorted to as a trump card). His main weapon appears to be an amalgamation of the Okinawan sai and Japanese katana. Mugen also has a tendency to parry attacks with the steel base of his geta. 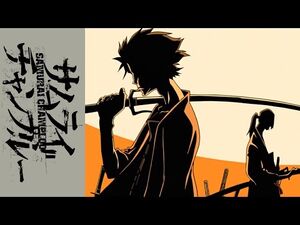