He was one of the nine Hashira, a group of the nine greatest Demon Slayers in the Demon Slayer Corps. Specifically, Muichiro was the Mist Hashira who invented and made use of the Breath of Mist sword style. He was also the youngest of the Hashira at only 14 years old, being considered a prodigy of the Corps who became a Hashira only two months after joining the Demon Slayers.

Muichiro, like the other Hashira, was involved in the raid on Muzan Kibutsuji's headquarters - the Dimensional Infinity Fortress. During the assault Muichiro died in combat against Kokushibou, the second most powerful Demon who held the position of Upper Moon One within the Twelve Demon Moons, and who also happened to be Muichiro's ancestor.

Muichiro was a 14-year-old boy at the time of his death and had a youthful appearance befitting said demographic. His mint-green eyes were large and empty-looking and his complexion was very light. He was fairly short and had a delicate figure which led Tanjiro to believe he was physically weak. Muichiro's black hair was long and straight and faded to pale turquoise as it approached his waist. In keeping with his overall appearance, Muichiro wore his hair entirely loose. There were two clumps of hair protruding from each side of his head ever so slightly, and two strands of hair left down to frame his face that were barely shorter then the hair at his back. Lastly Muichiro had unkempt bangs over his forehead.

Like most Demon Slayers, Muichiro wore a variation of the standard Demon Slayer Corps uniform. However, Muichiro's customized uniform differed from the basic uniform in several ways. The sleeves of his uniform were far longer and looser then the standard, conveying a similar appearance to a kimono. Furthermore, there were no bands tying his trousers at the calves, which made them far looser then the standard uniform. Lastly, as opposed to the black shade attributed to most Demon Slayer uniforms, Muichiro's uniform had a slight turquoise-tint to it.

While his small physique certainly gives him advantages such as smaller hit detection, his size can be his liability when injured: because he is small he can succumb to wounds much quicker than his fellow Pillars who are bigger. 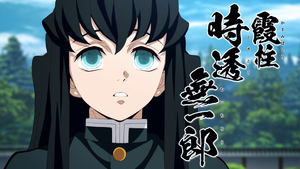 Muichiro's introduction in the anime. 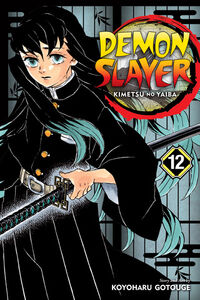 Muichiro in the cover of the manga's twelfth volume. 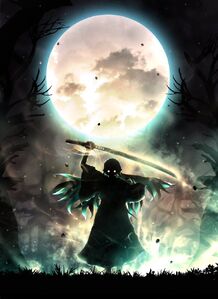 Retrieved from "https://hero.fandom.com/wiki/Muichiro_Tokito?oldid=1974188"
Community content is available under CC-BY-SA unless otherwise noted.